The Practical Soldier: Leave Him to Find Solutions My experience tells me that whenever the Indian Army is in crisis of functioning with relation to operational issues or under threat of failing in a mission the best solutions come from within the Service.

War gaming is the finest method of picking brains. No amount of imposed solutions will ever carry the stamp of acceptance the way a home grown solution will. I am saying this in reference to the Pampore incident.

Social media is livid that the Army seems to be getting the blame for something which was a failure related to SOPs of a different force. One is happy to see media releases from Badami Bagh, my old Headquarters, which pointedly emphasize on the need for inter force cooperation and finding solutions within.

The problem relates to command and control and division of responsibility. It has existed rather long but circumstances thus far favored continuing the ambiguity as it seemed to work well.

Water tight tasking sometimes creates more problems and shared responsibilities become an issue. Obviously the functional ethos of ambiguity is not going to continue and imposed solutions will probably ensure that. My strongest recommendation is that it must be left to the players on the ground and solutions will emerge.

The Army’s tasking system and the ‘be prepared’ task list is a wonderful exit valve which I would advise all to follow.

My purpose of this essay is not to do critique; that’s the worst thing to do when problems confront you. Mine is an anecdotal piece to highlight how solutions are usually well beyond SOPs.

It’s the practical ground commander or a senior officer with passion and experience who ensures success and defeats nefarious designs by sheer strength of personality and following by his command. So read on.

In June 1999 I was the Colonel General Staff of HQ Victor Force at Avantipur. The Kargil crisis was at its peak.

The ammunition for the artillery guns, which were proving a nuisance to the Pakistani intruders at the heights, was moving along the same National Highway which has been the focus in the last few days.

It was crucial that the road be secure; we just could not afford to have ammunition blown up on the road. Those were the days when terrorists roamed the countryside leading to our simultaneously handling five to six engagements in the area of responsibility. So the threat to the Highway was real and intense.

The ITBP was responsible for the ROP and the Rashtriya Rifles (my HQ) provided corridor protection. I cannot even recall if it was a written arrangement. All I remember well is that I had high tea and lunch at the ITBP Force HQ almost every week, sometimes twice.

My General Officer Commanding (GOC) was a man of the ground and together we went checking the ROP every other day and ended up at the ITBP HQ for tea and exchange of ideas. There was never a problem of ego. The ITBP officers, all outstanding professionals, would always welcome us and exchange views and implement the ideas.

On a certain afternoon of that blistering June; it was the operational environment which was hot, not Kashmir’s salubrious climate; I picked up the phone and asked to be connected to the Commander of 1 Sector RR at Anantnag.

The Army’s location at Anantnag is right next to the National Highway in the virtual civil lines of the town. It is called Khanabal. The convoys going and coming from Udhampur all halt here for tea and turn into a convoy ground.

It is a vulnerable time for the HQ because gates are open and the vehicles all bunched up while entering. The HQ duty officer told me that the Commander and the entire staff were out on the road reinforcing the ROP.

I chided him saying HQ have better things to do than reinforce ROP. In the evening I spoke to the Commander and inquired about this awkward practice. He explained me the vulnerability factor regarding the convoy, the ammunition being carried by vehicles and the lives at stake in the buses.

He then went on to state that he would never be able to live with his professional ego if a single man lost his life or a single vehicle was blown up in the area of responsibility of his Sector.

Technically, he was not responsible for the ROP but the sector area of responsibility was his and he took ownership of it. Written tasking or none he would use every resource to do the needful.

Thus from 4 to 5 PM, everyday every available hand of his HQ who could use a weapon and had one would be on the road protecting the convoy. Sometimes such decisions and actions set passion afire. The actual effect may have been marginal but the fact that the HQ staff and all soft elements were involving themselves in a robust task sent a very strong message to the units of the Sector.

It may be worth recalling that a 18 Km stretch of un-metaled road with 110 Hume pipe crossings which fell within responsibility of 1 Sector RR and was most vulnerable to IEDs was kept safe for move of ammunition through sheer frontline leadership by example. I often quote this example in leadership talks because in my experience this was one of the finest examples of cocking a snook at written SOPs.

In 2007, I had just taken over the Dagger Division at Baramula. A change was in the air. Chinar Corps in Kashmir had scored major successes in eliminating terrorist leaders and reducing infiltration while exploiting the LoC Fence.

The terrorists struck back, as it usually happens. A large number of standoff ambushes on the main Highway between Srinagar and Kupwara caused unacceptable casualties.

The large convoy with protection vehicles and the small tactical moves of unit convoys were all equally vulnerable. Men inside buses did not carry weapons due to problems of accounting while they were proceeding on leave and wore no bullet proof jackets (BPJs); well no one thought you need BPJs in a convoy.

The Army Commander at Udhampur stepped in. He checked from his staff why men were reluctant to wearing BPJs while moving in convoys, even if proceeding on leave. Pat came the answer from one bright spark. The BPJs were just too heavy to wear on long journeys inside a bus. Pat also came the decision of the Army Commander.

In order to empathize with the travails of the officers and soldiers who were now under orders to wear protective gear and carry weapons, the Army Commander and his entire staff at HQ Northern Command wore BPJs for their daily duties twice a week.

It was expected at every HQ. I do remember receiving the Army Commander at Baramula wearing my BPJ; it wasn’t too comfortable but then orders are orders.

Another direction from the same Army Commander to obviate major casualties in the case of failure to prevent an attack was that no bus would carry more than 20 soldiers and no truck more than 10. It led to logistics problems because that was not the optimum carrying capacity of the vehicles and more vehicles had to be employed and buses hired.

I am sure if the audit authorities had objected the good General would have ensured verbal and written slaughter against them. 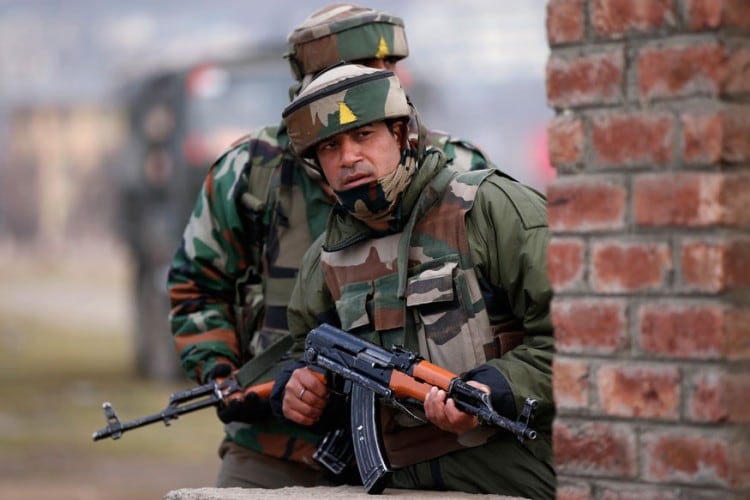 (Indian Army soldiers take their positions near the site of a gunbattle on the outskirts of Srinagar. (Photo: Reuters))

All service buses of Chinar Corps were hardened progressively; which meant that the sides of the buses were made bullet proof. The fuel consumption of the vehicle goes up drastically but lives are saved and soldiers travel mentally at comfort.

How did this idea come about? It was the same brigadier who used to turn out his staff to protect the convoy in Anantnag. In 2003, he was appointed GOC Dagger Division, in the rank of Major General. The convoy used to comprise large buses, which if fired upon from even standoff distances, were vulnerable as they were not hardened.

If an IED blasted in their vicinity the shatter effect of the glass windows would cause shards of glass to act as bullets thus causing casualties. The GOC wasn’t going to accept this and keep his men vulnerable. He visited the Central Vehicle Depot at Delhi Cantt, saw old and disused Vijayanta tanks lying there.

The skirt plates of the tanks, all hard armor plating, were cut from the hull, transported to Kashmir and welded to the sides of the buses. All glass windows were taped with broad transparent scotch tape to prevent shatter effect.

Disused industrial rubber lying at NHPC projects was picked up free of cost, melted and layered under the bus body giving it additional protection in the event of an IED attack.

In mid-2004, a stray Maruti 800 with a gas cylinder bomb and a suicide bomber (one of the rare cases in the Valley) dashed against a bus of the Dagger Division at Pattan on the same Highway. The terrorist blew the IED he carried.

It killed the driver of the bus but all occupants were safe; even the shards were limited. The Army took it from there and all buses were progressively hardened at the Base Workshop at Udhampur.

Frontline leadership of the Army can turn any negative situation on its head and practical solutions will always be found. We need to take inspiration from institutional memory, something the Army is terribly poor at. The Army Training Command at Shimla has a cell called the Center for Army Lessons Learnt (CALL).

It records all lessons from past operations. It should be the one tasked also to search its own data base for solutions when confronted with problems. Sending out bulletins is fine but in the rigmarole of everyday life these lessons do not get institutionalized.

My sincere advice to all who matter; let the forces in J&K be. Just sensitize them, express regret when failure takes place but do not impose solutions. There are enough good men and women who have the practical sense, patriotism and concern. They will find their own solutions.
First Published: July 1, 2016, 11:19 AM IST