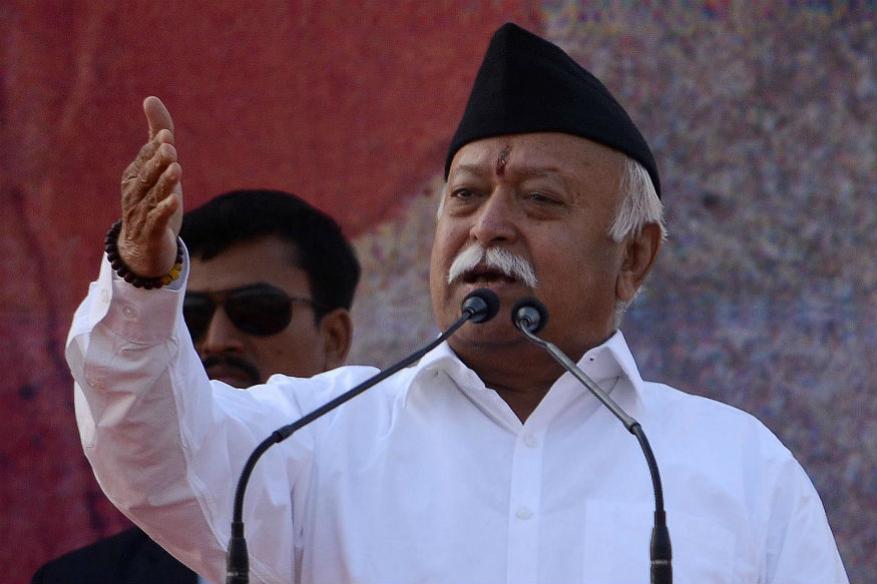 Better late than never. RSS sarsanghchalak Mohan Madhukar Bhagwat hoisted the national tricolor in a Kerala school today, the 15th of August. But the news is that in so doing, did he inadvertently put a lid on the past ambivalence of the Sangh about the tricolor of India and the bhagwa dhwaj of Hindu rashtra? The tricolor is unquestionably the most supreme, his action asserts.

His action unwittingly sets at rest his own internal turmoil over the tricolor. Why, only last year, in February, 2016, Bhagwat said at a gathering in Kanpur: "BR Ambedkar was also (emphasis added) of the view that bhagwa (the saffron flag of the RSS) should be adopted as the national flag and Sanskrit should become the national language. Unfortunately, we couldn't propagate his views."

By his presence in Kerala, which of late is witnessing bloody battles between RSS and CPM activists as the BJP attempts to expand its base in the red bastion, Bhagwat may have tried to send a political message. But his very act of hoisting the tricolor on Independence day – that too by violating orders of the local administration -- conveys the second message of its own.

The RSS oath, taken by all active members, flows naturally from this: “Before the all-powerful God and my ancestors, I most solemnly take this oath, that I become a member of the RSS in order to achieve all round greatness of Bharatvarsha by fostering the growth of my sacred Hindu religion, Hindu society, and Hindu culture. I shall perform the work of the Sangh honestly, disinterestedly, with my heart and soul, and I shall adhere to this goal all my life. Bharat Mata Ki Jai.”

The spirit embodied in the prayer and the oath is represented by the bhagwa dhwaj, the saffron flag. It is no secret that the RSS was never in favour of the tricolor. It preferred the ochre or saffron flag. It believed that saffron is the colour of Hinduism. Seventy years ago in its August 14, 1947 edition, the Organiser, the RSS mouthpiece, explained the reasons: “The people who have come to power by the kick of fate may give in our hands the Tricolor but it never be respected and owned by Hindus. The word three is in itself an evil, and a flag having three colours will certainly produce a very bad psychological effect and is injurious to a country."

An oft-quoted statement of Sarsanghchalak MS Golwalkar made while addressing a Gurupurnima gathering in Nagpur on 14 July 1946 goes like this: “We firmly believe that in the end the whole nation will bow before this saffron flag.” Years later, Golwalkar lamented in an essay, Driftings and Driftings in his compilation titled Bunch of Thoughts: "Our leaders have set up a new flag for the country. Why did they do so? It just is a case of drifting and imitating....Ours is an ancient and great nation with a glorious past. Then, had we no flag of our own? had we no national emblem at all these thousands of years? Undoubtedly we had. Then why this utter void, this utter vacuum in our minds."

The Sangh’s opposition to a non-saffron flag began in 1929, when the Sangh itself was four years old. A Sage publication, Religion, Power and Violence: Expression of Politics In Contemporary Times, says: “The RSS during the freedom struggle hated anything which symbolized the united struggle of the Indian people against British rule. The case of the tricolor is the most pertinent one. In December, 1929 Congress at its Lahore session adopted Purna Swaraj as the national goal and called upon the people to observe 26 January 1930 as Independence Day by displaying and honouring the tricolor (it was the flag of the national movement by this time). In response to this historic united call for all the people of the country, Dr. Hedgewar as Sarsangh-chalak issued a circular to all the RSS shakhas to worship the bhagwa jhanda (saffron flag). The circular said: ‘…all the branches of RSS should arrange a congregation of all swayamsewaks in their sanghasthans (places where Sangh meets) at 6 p.m. on Sunday, the 26th January 1930 and salute the National Flag, that is Bhagwa Dhwaj. A speech should be arranged to explain the true concept of independence….’
“This circular makes it clear that when the whole nation was saluting the tricolor as a symbol of a united struggle, RSS was raising sectarian issues to divide the people in the name of religion. This circular is often presented by RSS as a proof of its participation in the freedom struggle.”

Without going into the debate over the Sangh’s participation in the freedom struggle, the flag history can be summarized by saying that the Sangh is said to have hoisted the tricolor on August 15, 1947 and on January, 26, 1950. Whether the Sangh hoisted the national flag at its Nagpur headquarters thereafter is mired in a controversy too. The argument of Sangh supporters that the flag code posed some restrictions on private organisations from hoisting the tricolor is countered by the critics who contend that the code did permit the hoisting on special occasions – like Independence Day!

Anyway, in 2001, three youth took matters into their hands. On January 26 that year, Baba Mendhe, Dilip Chattani and Ramesh Kalambe entered the RSS headquarters in Nagpur. They claimed membership of a body called Rashtrapremi Yuva Dal. They began to chant freedom slogans and took out a tricolor. By this time, several RSS activists had come out and they tried to evict the three. The intruders later claimed that they managed to hoist the flag despite preventive attempts by the Sangh activists. The case went to court. They were set free in 2013 for lack of evidence.

But thereafter, the tricolor started flying atop the headquarters on all special occasions. Bhagwat, after he became the head of the RSS in 2009, continued the tradition. After the 2014 general election, the flag controversy involving the RSS was the stick the opposition often used to beat the Sangh and its affiliates, including the BJP, with. Today, Bhagwat hoisted the national flag not inside the Sangh premises in Nagpur, but under full national glare in a Kerala school.
First Published: August 15, 2017, 2:23 PM IST