Will Bimal Gurung End Up Like His Mentor Subhash Ghisingh? 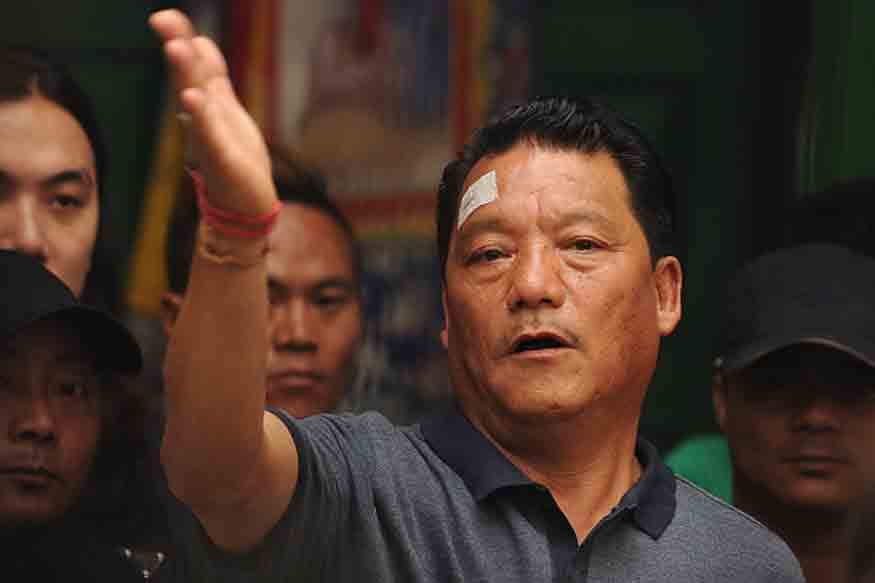 Support for Bimal Gurung hasn’t faded and some argued that his absence had just made him more of a folk hero.

Gurung, the chief of Gorkha Janmukti Morcha, the party leading the fight for a separate Gorkhaland state in Darjeeling hills, has been literally smoked out of his home town, and state, by the Mamata Banerjee government. He was last seen in Sikkim, hurriedly winding up a meeting with his colleagues before being whisked from the clutches of Bengal police who are closing in on him every single day.

His once trusted deputy, Binay Tamang, has openly defied him, positioning himself as the face of the party. Though Gurung publicly termed his strayed lieutenant “traitor” and also expelled him from the party, Tamang has been defiant. Having liaised with the state government on behalf of the party earlier, he has now begun communicating with the Centre; and on September 3, two days after his suspension from party, he shot a letter to Union Home Minister Rajnath Singh, claiming to be an “authorised representative” of the party. Confined in his Darjeeling home and protected by Bengal police, Tamang is now threatening to expose those in the Morcha who have “misappropriated crores of rupees”.

The rift in the 10-year-old party is out in the open.

It cannot be said with certainty at this point if Tamang will be able to do to Gurung what the latter did to Ghisingh—given that Tamang does not enjoy the mass support that Gurung did and still does, though on a much- reduced scale. But that may not make much difference to Gurung’s fate. Thanks to the state government that is seen as backing Tamang as the new Gorkha leader.

Right from the start of the current phase of the agitation in early June, the government has been successful in keeping Gurung more or less in confinement. Fearing arrest in a number of cases slapped on him by the government, the Morcha chief has mostly been in hiding—away from public demonstrations and even meetings of the Gorkhaland Movement Coordination Committee, the 14-party conglomerate formed almost three months ago to press for Gorkhaland. The government has booked Gurung, and also his wife Asha, on number of criminal cases ranging from murder to arson. An arrest warrant has been issued against him and seven others.

Having already arrested several Morcha leaders one by one, the government has by now managed to close in on Gurung and effectively drive him out into the “jungle, among animals,” (in Gurung's own words) and isolate him. What could be more humiliating for the once undisputed leader than the fact that the police have set up a camp in his backyard, at Kanchenjunga Public School in Malidhura, his pet project? By his own admission, “The Bengal government is trying to make me kneel on my knees.”

Ten years ago, around this time, it was his time to make Ghisingh “kneel on his knees”. Ghisingh, the much-dreaded firebrand leader of the Gorkha National Liberation Front (GNLF), which spearheaded the violent Gorkhaland agitation of the 1980s, was completely brought down on his knees when Gurung rebelled and broke out to form his own party, Gorkha Janmukti Morcha, on October 7, 2007. The GNLF was completely decimated and Ghisingh was banished from the hills, forced to spend most of his remaining life in exile, in the plains of Jalpaiguri, more than 100 kms from Darjeeling.

Headed For A Fall

The state government’s drive to reduce him notwithstanding, Gurung was already headed downhill. If anything, the on-going agitation—that shall be remembered for a number of reasons, most important being the unprecedented levels of people’s participation—brutally exposed him for what he is.

Two days after Mamata Banerjee clarified in Mirik that the government move to make Bengali a compulsory paper in schools would not be applicable for hill schools, he made this an issue to ignite protests against the government. The 'real motive' behind the sudden move is still being questioned.

As the spate of violence took over—over a dozen have died so far, three allegedly in police firing on June 17, a charge denied by the government—the anti-linguistic imposition movement soon converted into an agitation in demand for a separate state.

Gurung then called an indefinite strike, with little time for people to prepare. However, the people, despite being fully aware of the hardships of a strike, came out in overwhelming support. Irrespective of political affiliations, they were out on the streets, fighting the “last fight for Gorkhaland”. But what is a strong movement without a strong leader?

As it turned out, Gurung had no strategy other than begging Morcha’s ally Bharatiya Junta Party for attention which was hard to come by. When Rajnath Singh did hear some pro-Gorkhaland leaders in Delhi, he directed them to Bengal chief minister, with whom Gurung and other leaders had vowed never to talk. The BJP is in no mood for Gorkhaland; it never was. Gurung and his ilk, with liberal dose of sweet-talk from central leaders including Prime Minister Narendra Modi, had managed to convince the hill people otherwise.

As the strike proceeded from one day to another with nothing coming by way of hope, Gurung’s leadership became increasingly questioned. People expressed anger against him, and other leaders in general, for a wide range of issues, new and old—compromising on Gorkhaland dream to accept the Gorkhaland Territorial Administration in 2011, corruption, not doing enough for people, working for vested interests, love for power, not leading from the front, for Gurung’s flip-flops—now he doesn’t want to talk to the state government and now he wants to—well, for almost everything.

Gurung soon found that the people had taken over the movement. He has been keeping on calling for the strike to continue, because there’s little else he can do. If he does call off the strike, which has achieved nothing so far and is unlikely to do so in the near future, he has to answer to the people, “Why? Did it manage to meet its objective? Why was it called in the first place?” The junta, who were drawn in without warning, had long since been pressuring leaders with their “Gorkhaland or nothing” stance. Gurung is indeed riding the tiger.

In his heydays, Ghisingh was a terror to say the least. The joke was that you spoke against him only if you wanted to get shorter by six inches, or, to put it less mildly, beheaded.

When tides turned, the same man, after resigning from the chairmanship of the erstwhile Darjeeling Gorkha Hill Council, had to flee the hills, his one-time fiefdom, for his and his family’s life. When his wife Dhanmaya died in August 2008, Gurung and his partymen did not even allow her body to be taken to Darjeeling for last rites.

After a failed bid to return in 2011, he finally came back to Darjeeling ahead of Lok Sabha elections in 2014 and tried to revive his party, but by then he was too feeble to make any difference. He died on January 29, 2015, aged 80, after a prolonged illness in a Delhi hospital.

What took Ghisingh almost 30 years—GNLF was formed in 1980—Gurung has managed in just 10 years. Around this time, 10 years ago, he was riding a massive popularity wave, thanks in large part to the euphoria over Indian Idol winner Prashant Tamang, largely ignored by Ghisingh. As the “Gorkha community” consolidated behind the Indian Nepali singer, whose win depended on popular votes, he was able to prop himself as the new leader—the flag-bearer Gorkhaland—set to meet the aspirations of the people hitherto stifled under Ghisingh regime.

Politics is no place for moral science, but Gurung should have known what goes comes around. Nothing about karma, just the simple logic that if you make the same mistakes, you get the same results.

Political opportunism did no good to Ghisingh; no way will it benefit Gurung either.