Raja Wants His Pound of Flesh from The Kalaignar, And He Wants it Now 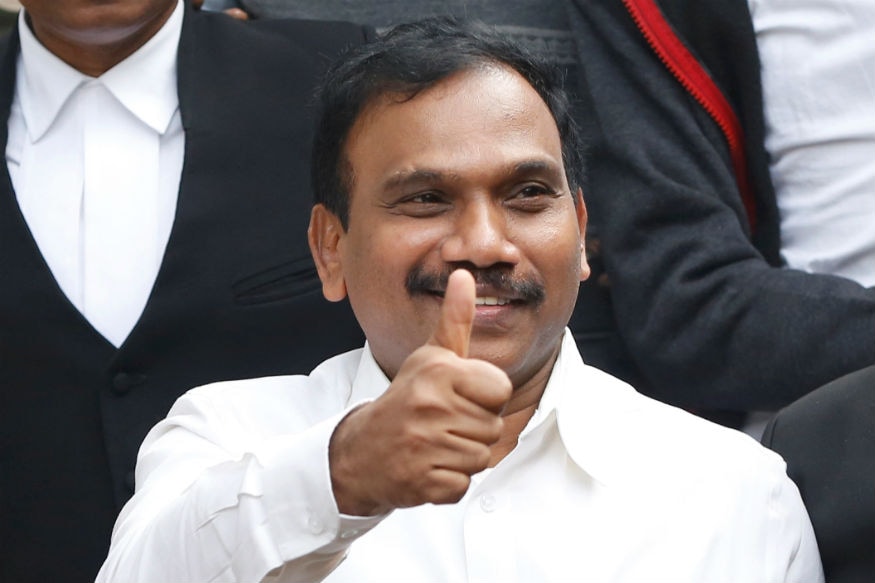 Former telecom minister A Raja gestures as he leaves after being acquitted by a special CBI court in the 2G scam case on December 21, 2017. (REUTERS/Adnan Abidi)

One phase of the 2G court drama is over, ending in Raja’s favour. A special court has acquitted him in the 2G scam case wherein he was the prime accused.

There are still many more phases to “overcome”, depending on when the CBI approaches the high court and then the Supreme Court. But Raja is in a hurry. He is not willing to wait for the distant future to either fully acquit him or convict him.

He knows he has paid his dues to the DMK and its boss M Karunanidhi by spending seven years of his life on the sidelines of politics. Before the 2G case re-envelops him, Raja wants his dues back. Paid in full.

The Dalit leader from Velur village in Perambalur in central Tamil Nadu has come a long way. His family was poor. Dalit to boot. The young Raja used to go all the way to Thiruchirapalli and back every day for his schooling. A quick wit and shrewd youth, he wanted to get out of his miserable situation. He graduated in law and practised in the rural areas.

He was restless, and the youth wing of the Dravidar Kazhagam, the parent body of the DMK, beckoned to him. He rose in the ranks from a block-level student leader to being Karunanidhi’s choice as the party candidate from Perambalur Lok Sabha constituency in 1996. He had a good command over Tamil language. A powerful orator and writer.

A slogan of his in the 1996 campaign became popular. The literary maestro in Karunanidhi noticed it. His slogan was: “Oru kilo arisi oru ruba, oru hello 50 paisa (1 kilo rice 1 rupee, a hello on the phone 50 paisa).

Irony, that the department of communication — represented by “hello” and “telephone” — would dog him throughout his career, even bring him down to the ignominy of an arrest and a stint in jail.

Raja’s political career was as closely linked to the Kalaignar family as his politics was linked to communications and telecom. It was 2007. Raja was like any other Tamil MP in Delhi, toeing the party line when summoned and otherwise keeping to himself.

That May, the Maran family did the unthinkable. Close to the Kalaignar family by blood and friendship, they attacked the supremo — intentionally or otherwise is debatable.

Dayanidhi Maran was then in Delhi, the minister for IT and Communication. His brother Kalanidhi Maran was running the family paper Dinakaran. It published a series of opinion polls which showed Karunanidhi’s younger son MK Stalin having more public ratings than older son Alagiri. The polls gave a sizeable rating to “others” — interpreted as Kanimozhi or Dayanidhi himself.

There was violence in Madurai, Alagiri’s town of influence. Three people died.

Then prime minister Manmohan Singh and Congress chief Sonia Gandhi rushed to Chennai, though apparently to facilitate Karunanidhi for completing 50 years as a legislator.

Dayanidhi, ever present by the side of Karunanidhi, was missing on the occasion. The DMK asked the Kalaignar to expel Dayanidhi. He quit his post in anger. The communications and IT portfolio became vacant. That’s when Karunanidhi asked Raja to head it.

Even when the 2G scam broke, Raja’s alleged role was linked with that of Kalaignar’s daughter Kanimozhi who, by 2007, had also reached Delhi as a Rajya Sabha member of the DMK.

The Marans returned to the family fold eventually.

When Raja faced the threat of arrest, which came about in 2011, the DMK had to decide whether to back him or not. But Karunanidhi had no option because his own daughter’s fate was linked closely with Raja’s. That was the proverbial lifeline for Raja, though nobody talks about it openly. Raja on his part never once laid any blame at Kanimozhi’s feet and the latter reciprocated by supporting his stance always.

The party said at that time it was supporting Raja on the ground that he was innocent until proven guilty. The special CBI court has acquitted him, saying the prosecution could not prove him guilty.

Raja now wants his resurrection. That can come only with the blessings of the Kalaignar. The grand old man is not exactly in good physical and mental health. The current status is not really known outside of his family. That adds to Raja’s worries.

Stalin, for all purposes, is the leader of the DMK, the heir to Karunanidhi. But he is seen not as one in the mould of his father. The Kalaignar’s presence has so far stilled open criticism of the son.

The imploding politics within the AIADMK after Jayalalithaa’s death saw the emergence of Sasikala’s nephew TTV Dinakaran.

There is public perception about how despite being cornered by the rival camps and the ruling party at the Centre, TTV has managed to stand his ground. The inevitable comparison is with Stalin who is not even an orator. If he wins the RK Nagar assembly bypoll, the comparisons may come out in the open.

In this situation, Stalin needs support too, especially from family and friends. Like the Marans. Like Raja. Like Kanimozhi. He must be aware that the post-Kalaignar DMK might spring a number of power centres.

Alagiri is already there in Madurai. Raja and Kanimozhi, forged into an association by their being in Delhi as the faces of the DMK and by the 2G scam, can be another. Who knows? Stalin, it is learnt, is actively considering how to accommodate his sister and Raja in such a way that their resurrection is commensurate with their “sacrifice” for the party.

It is in this light that Andamuthu Raja penned a note to his Kalaignar, in a language that only a Tamil scholar can understand and appreciate. Here’s the translation of his letter:

'Who will punish those who tainted your 80-year public life?
I place the 2G verdict on your feet with gratitude.
You preserved me in snow so I wouldn’t dissolve in the spectrum battle
I’m waiting to hear your words
Spectrum attack tainted an ideological movement (DMK)
Spectrum politics gave a handle to those who couldn’t shrink your governance
Spectrum battle conceived by individuals and waged by institutions including CVC, CBI, JVC
It’s a first of its kind in world history
A shame that even UPA govt couldn’t realise it was trapped in the plot to bring it down
In 2009 itself we gave 59 crore mobile connections against the 60 crore target set before 2012
The spectrum cartel was broken to pave way for the Whatsapp, Facebook, Twitter revolution
Calling it a crime and jailing for this will happen only in India
The press and media which refused research and showed vulgar interest on spectrum wouldn’t ‘see’ the social perspective

What the highlighted portions mean is anybody’s guess; their tone is not that of a lament but that of a claimant.