The Dalit, The Devil and The Deep Blue Sea 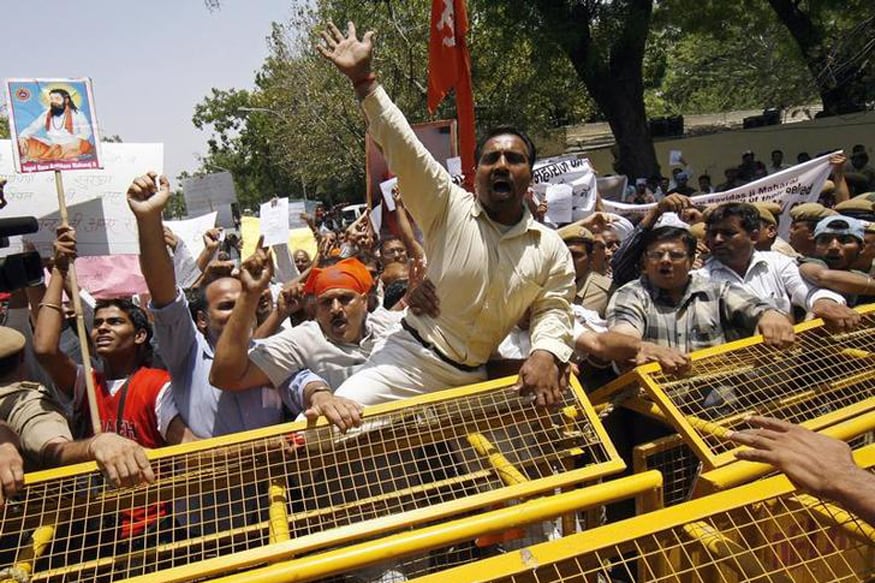 Members of the Dalit community raise slogans during a protests. Representative Image

The word Dalit, for politicians, signifies a human tragedy to exploit at whim.

Their sizeable population translates into a formidable amount of votes. That settles their fate – they are tethered to their numbers. And they have no choice but to be wooed by political parties. Whether they like it or not.

The wooing is done at two levels.

At the idolatory level, each party has conveniently gone against its own legacy and appropriated Ambedkar, considered for political purposes the Dalit Messiah.

At the individual level, each party has even breached the privacy of a Dalit home, for a photo-op of a leader sharing a meal with a Dalit family.

The Dalit already finds his space restricted outside his or her home. Now the Dalit is not free even inside the home.

Rahul Gandhi notched up for himself a unique record: The politician who took off on the Dalit home-visiting-spree has an enviable record of having visited the maximum Dalit homes -- uninvited of course – nearly every year since 2008.

His visits serve the singular purpose of filling photo albums, because nothing was supposed to come out of the visits other than to show the Nehru-Gandhi princeling dabbling easily with the lowest of the lowly and even sharing their food.
The Dalit home is now on the must-visit list of any and every politician.

Amit Shah is one who takes these visits seriously, whether in UP before the last assembly elections, in West Bengal, the latest in Telangana. His colleagues are not far behind, like for instance BS Yeddyruppa in Karnataka. Nitin Gadkari too.

It is the insolence that stands out during and after the visits. The visits are planned in advance. The unlucky Dalit family told in advance to be ready with food. In one case, the family asked to be excused because it did not have the money to buy rice for the VIP guest. Nothing doing, get it from somewhere, the family was told.

The leaders somehow manage to shake hands with the Dalit family members, talk about the weather and their problems, promise to set things right, all the while ensuring the cameras are whirring, and then leave. Never to look at that family again. Of late, the visits are followed by rumors that the leaders actually ate stuff bought from a hotel.

There is no evidence provided. The rumors spread primarily to insinuate that the leaders still practice untouchability. True or false, it points to the mindset in India about Dalits, going to their homes, eating their food, touching and interacting with them. Such are the humiliating and demeaning circumstances under which these visits occur and are covered by the media.

The ultimate abuse of the Dalits goes beyond all this. Even as these visits are planned and executed, the routine persecution and oppression of Dalits continues. Uninterrupted. Ironical. The suicide of a Dalit youth Rohith Vemula and the consequent national unrest did not in any way deter the visits. Political wooing of Dalits did not stop a mob of lynchers torturing Dalit youth in Una in Gujarat on the false pretext of protecting cows.

In Saharanpur in Uttar Pradesh, the Thakurs literally provoked a riot as they competed with the Dalits in taking out processions under various pretexts. The riots were – and are -- bloody and violent, but the VIP visits to Dalit homes, this time in Telangana, came about without raising any sense of irony.
Other tales of Dalit oppression have become too “routine” over the centuries to merit separate mention.

There seems no end to this road.