England thrashed Pakistan by an innings and 55 runs to win the second Test at Headingley on Sunday. Victory, completed inside three days, saw England level the two-match series at 1-1 after Pakistan won the first Test at Lord's by nine wickets 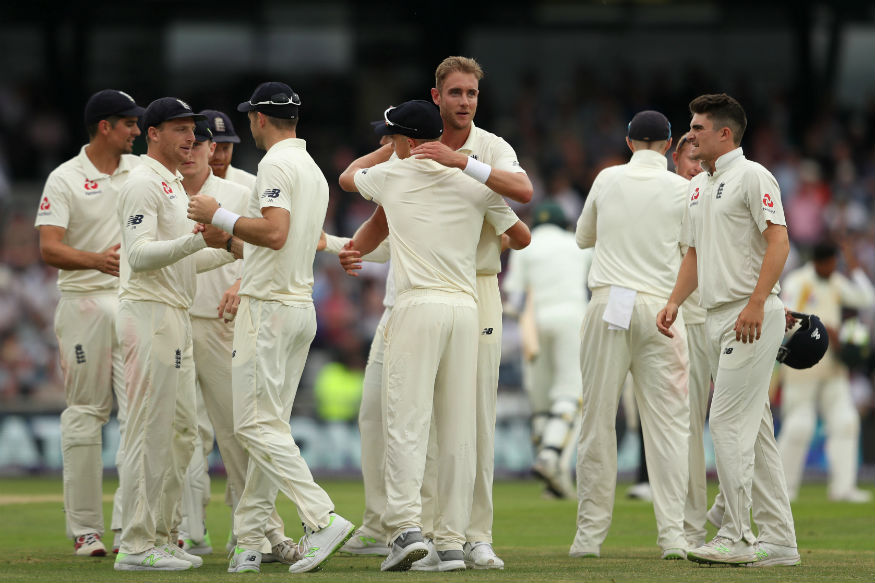 Leeds: England won their first Test match since September as they thrashed Pakistan by an innings and 55 runs in the second Test at Headingley on Sunday.

Victory, completed inside three days, saw England level the two-match series at 1-1 after Pakistan won the first Test at Lord's by nine wickets.

It was also England's first victory in a Test match since they beat the West Indies at Lord's in September last year, with the side having endured a winless run of six defeats in eight Tests coming into this fixture.

By drawing this short campaign, England avoided a third successive series loss after reverses in Australia and New Zealand.

Jos Buttler's blistering 80 not out on Sunday saw England to 363 and a commanding first-innings lead of 189.

Pakistan then collapsed to 134 all out, losing their last seven wickets for just 50 runs.

Stuart Broad took three for 28 and off-spinner Dominic Bess grabbed his first Test wickets in a return of three for 33.

"It's been an enjoyable week, really pleasing to show a lot of character after the disappointment at Lord's," England captain Joe Root told BBC Radio.

Buttler, the man-of-the-match after being recalled to Test cricket at Lord's, was glad to have justified the faith of new England selection chief Ed Smith, who picked him on his form in the Indian Premier League Twenty20 tournament.

"I am lucky I guess, for someone to take a punt on me and say there is a Test player in there somewhere despite not playing county cricket," Buttler told Sky Sports. "It gives me great confidence."

England resumed Sunday on 302 for seven, with Buttler 34 not out and Sam Curran, unbeaten on 16.

Curran, however, was out for 20 on his 20th birthday when he well caught in the slips by Asad Shafiq off man-of-the-series Mohammad Abbas, who took eight for 64 at Lord's.

At this stage, no batsman in the innings had scored a fifty, although Bess had made a commendable 49 as nightwatchman following a half-century on debut at Lord's.

Buttler, dropped on four on Saturday when Hasan Ali failed to hold a routine chance at midwicket, soon altered that statistic.

He went to fifty in style with two boundaries in successive Abbas balls -- an extra-cover driven four and a hooked six.

But with Buttler five runs short of equalling his Test-best 85, made on debut against India at Southampton in 2014, No 11 James Anderson was caught in the slips off Hasan.

Pakistan had been behind in this game ever since they making a mere 174 in their first innings after captain Sarfraz Ahmed won the toss on a good pitch but then saw his batsmen struggle in overcast, bowler-friendly, conditions.

Sarfraz, however, insisted: "It was the right decision to win the toss and bat first but England's bowlers performed very well in the first two hours.

"It meant we couldn't capitalise on a good batting track," the wicket-keeper explained.

But frustrated Pakistan coach Mickey Arthur said: "It was a poor display from us, after the display at Lord's.

"As long as the guys are learning from it, it is a young dressing room. Inconsistency is what comes from a young team, as annoying as it is," the former South Africa and Australia coach added.

But Azhar was out for 11 when Anderson, England's all-time leading Test wicket-taker, knocked over his middle stump.

And Pakistan were 30 for two when Haris Sohail (eight) saw a hard-hit drive off Anderson brilliantly caught one-handed by a diving Bess at extra-cover.

Pakistan had moved on to 83 for three after lunch when the 20-year-old Bess finally grabbed his first Test wicket.

Imam-ul-Haq drove his first ball Sunday for four, but five balls later Bess had him lbw for 34 to a delivery that skidded on.

Imam's exit effectively ended Pakistan's resistance and the match finished when Root, on his Yorkshire home ground, held a slip catch to dismiss Abbas off Broad.