Home » Cricket Home » News » Ashes 2019 | In Numbers: Steve Smith’s Herculean Efforts Put Him in a League of His Own
5-MIN READ

Ashes 2019 | In Numbers: Steve Smith’s Herculean Efforts Put Him in a League of His Own

Smith is one of only 23 batsmen who have achieved this feat (at least once) in Test cricket.

It has happened just 33 times in Test cricket history. And only 9 times since 1990.

That is how rare an event it is to aggregate 700 runs (or more) in a Test series.

And that is what Steven Smith did in the 2019 Ashes series in England.

774 runs in 4 Tests (7 innings) at an average of 110.57 including a double hundred, 2 more hundreds and 3 fifties – these are mind boggling numbers achieved in any era. But to achieve them in an era dominated by the instant stardom of T20 cricket and mushrooming leagues and faulty techniques and deteriorating temperaments in red ball cricket in what is still the most coveted series in history – makes this achievement of Smith even more special.

Smith is one of only 23 batsmen who have achieved this feat (at least once) in Test cricket.

He has crossed the 700-run mark once before in his career – against India at home in 2014-15. This places him in a select group of 6 batsmen who have aggregated 700-plus in a series on more than one occasion in their careers – Don Bradman (5 times), Gary Sobers (3), Sunil Gavaskar (2), Everton Weekes (2) and Brian Lara (2) are the others in this club. 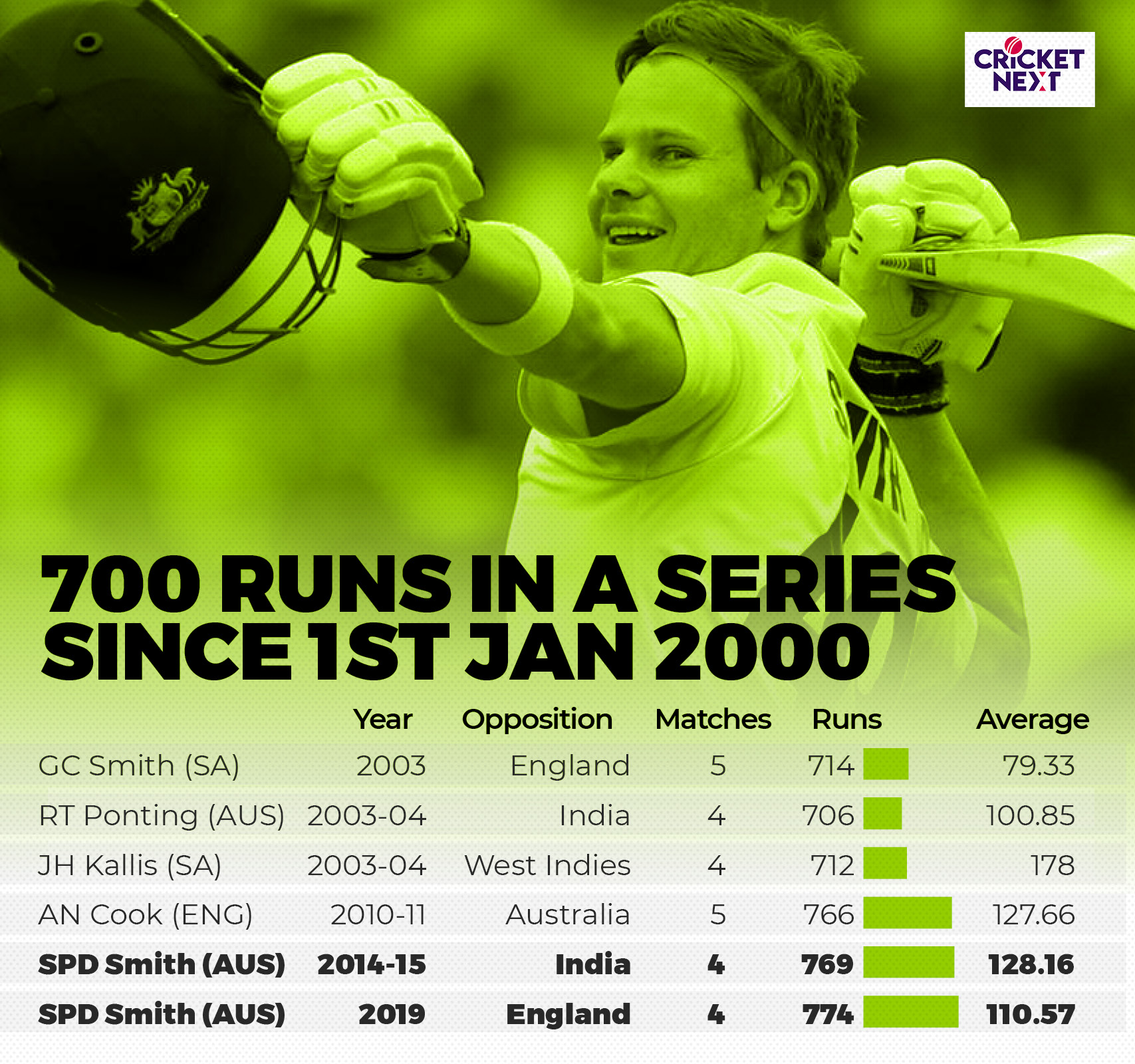 Smith’s Ashes 2019 heroics are only the 6th instance since the beginning of the millennium that a batsman has scored 700 runs in a series. Overall, it is the joint 12th highest run aggregate in any Test series in history.

Scoring big runs is in Smith’s DNA. He is the only batsman (along with Virat Kohli and Brian Lara) who has scored 500-plus runs in a series 4 times since 2000. Only Ricky Ponting betters their feat having achieved this on 5 occasions in the stipulated time-frame.

Smith scored 35.50 % of the total runs scored by the Australian batsmen in Ashes 2019 (Smith did not play the third Test so that is not counted). It is the second-highest percentage for any batsman in an Ashes series (min. 500 runs) just marginally second to Bradman (35.51%, 1930).

Smith has scored 1604 runs in his last 15 Ashes innings – this translates to 106.94 runs per innings. His exploits include 7 hundreds and 5 fifties.

Just for perspective, Bradman had scored 1673 runs in 15 Ashes innings at 111.53 per innings from the MCG Test in 1937 till the MCG Test in 1947 – that was his most successful run in the Ashes. This streak saw him register 8 hundreds and 2 fifties. Moreover, only three batsmen in Test cricket history have more hundreds against a single opposition – Bradman (19) against England, Sunil Gavaskar (13) against the West Indies and Hobbs (12) against Australia.

Apart from the sheer volume of runs scored by Smith, it is the timing of his performances which make them special. He scored tough runs throughout this Ashes series under pressure of wickets falling around him.

The average opening partnership for Australia in Ashes 2019 was a meagre 8.5 with a highest stand of 18.

This is what he did.

In Birmingham, he scored 144 (more than 50%) of Australia’s first innings’ total of 284. He followed that up with a fine 142 in the second innings. He became only the eighth batsman to score tons in both innings of an Ashes Test.

Smith top-scored for Australia with 92 in the first innings at Lord’s – an innings full of grit and determination even as wickets tumbled around him. He followed that up with a double hundred at Manchester (after sitting out at Leeds due to the lingering effects of concussion which resulted from being struck by a Jofra Archer scorcher at Lord’s) – where four of Australia’s top 6 could not even reach 20! He scored a quickfire 82 off just 92 deliveries in the second innings (wresting the initiative from England after being reduced to 44 for 4) and giving the Australian bowlers enough time to bowl the opposition out in the second innings.

Smith was again the highest scorer for Australia with 80 in the first innings at The Oval.

Rescuing his side in each of the seven innings he batted in the series after the early dismissal of the openers and scoring big runs when most around him failed - this shows that Smith not only has an appetite for big runs he also has the mental strength and temperament to give his best when his country needs him the most.

And to come up with these performances after a 16 month ball-tampering layoff with a hostile and jeering English crowd – shows Smith’s mettle and class.

Smith was the joint second-fastest (in terms of number of innings) to score 6000 Test runs. He took 111 innings to reach the landmark (same as Garry Sobers). He is also the second quickest to 26 Test hundreds taking 121 innings (after Bradman 69) ahead of Sachin Tendulkar (136), Gavaskar (144) and Matthew Hayden (145).

Smith’s average in winning Tests is also the second in Test history after The Don.

Smith is leaving everyone behind in the race for the GOAT after Bradman.