Marnus Labuschagne fell short of his fifth test century but Australia continued its strong start to the third cricket test, reaching 2495 at lunch Friday in another raininterrupted session at the Sydney Cricket Ground. 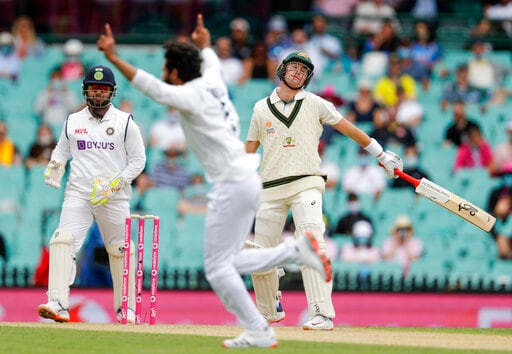 SYDNEY: Steve Smith scored his first century in Australia in over three years but Indias bowlers sparked another batting collapse for the hosts before its batsmen made a solid start to reach 96-2 by the end of the second day of the third cricket test at the Sydney Cricket Ground.

Smiths 131, his first century since the 2019 Ashes and Australias first this series, helped lift the hosts to 338 but Australia will be disappointed to have not scored more given its final eight wickets fell for 130 runs with India spinner Ravi Jadeja taking 4-62 and completing a spectacular run out to dismiss Smith and end the innings.

India made a good start to its innings reaching 70 without loss before Australias pace attack responded by removing both openers in the final session.

At stumps, captain Ajinkya Rahane was unbeaten on five with Cheteshwar Pujara on nine, trailing Australia by 242 runs with eight first-innings wickets remaining.

Having resumed Friday at 166-2, Australia was well-placed to take a stranglehold on the match after it had won the toss and elected to bat.

Marnus Labuschagne made 91 off 196 balls, and shared a century stand with Smith to see Australia past 200 runs for the first time in five innings this series, before he edged the impressive Jadeja to Ajinkya Rahane at slip with Australia at 206-3.

Jadeja then had Matthew Wade (13) playing a poor shot to be caught in the deep, before Jasprit Bumrah (2-66) trapped Cameron Green lbw with the last ball before lunch.

After lunch, captain Tim Paine (1) and Pat Cummins (0) were both bowled cheaply leaving Australia at 278-7.

Smith then reached his 27th hundred in 76 tests with a leg glance for three runs off Navdeep Saini in the 98th over. The former captain was far more effusive in his celebration than usual reflecting the relief at having scored his first century in 15 innings spanning four series.

Smiths eighth 100 against India came in 259 minutes off 201 balls, with 13 boundaries, and was the first against India in a home test since David Warners quickfire century at the SCG in 2015.

It was also Smiths first century in Australia since December 2017 in a drawn test against England at the Melbourne Cricket Ground.

Starc scored 24 off 30 balls, including two boundaries and a six, before holing out from debutant Saini (2-65).

Nathan Lyon was also out for a duck, trapped by Jadeja to reduce the hosts to 315-9.

Smiths was the last wicket to fall, run out spectacularly by Jadeja with a direct hit from deep square leg, as he was chasing quick runs with Josh Hazelwood.

Hazlewood made the lone breakthrough for the hosts in the 27th over to remove Sharma caught and bowled for 26, leaving India at 70-1.

Gill reached his maiden half century off 100 balls, with eight boundaries, before Cummins found the openers edge and had Gill caught by Green at gully the next ball.

Pujara and Rahane both survived some near misses in the final overs as Australia bowled a perilous line and length searching for a late wicket to tilt the match in their favor going into the third day.

On Thursday, Will Pucovski set the tone with a flourishing 62 on debut, before Labuschagne and Smith took over as Australias batting lineup finally clicked against India on a rain-interrupted opening day.

The four-match Border-Gavaskar trophy series is level at 1-1. The holder India is hoping to secure it with a victory in Sydney and Australia needing to win the series to reclaim it.

Australia won the opening day-night match in Adelaide by eight wickets and India responded with an eight-wicket win in Melbourne last week.