Steve Smith was again missing for Australia for the deciding match of its oneday international series against England, which won the toss and chose to bat first at Old Trafford on Wednesday. 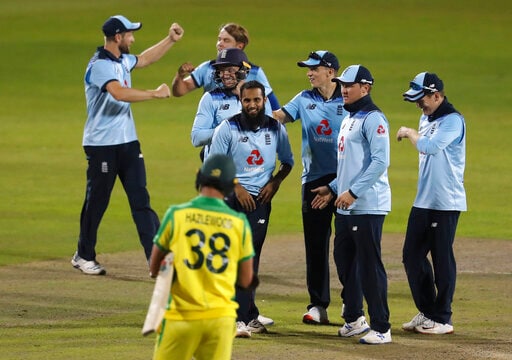 MANCHESTER, England: Jonny Bairstow struck 112 and underpinned another innings rebuild with Sam Billings as England recovered from losing two wickets from the first two balls to set Australia a target of 303 in the deciding one-day international on Wednesday.

From 96-4, Bairstow and Billings (57) put on 114 runs for the fifth wicket to bring England right back into the match just as they did in the first ODI on Friday when sharing a stand of 113 in defeat.

Bairstow reached his 10th ODI century before some lusty hits by Chris Woakes (53 off 39 balls) lifted the hosts to 302-7, leaving Australia needing a record run chase at the Manchester venue. Fifty-three runs came from the last five overs.

England is looking to preserve its five-year unbeaten record in bilateral ODI series, and finish its international summer during which all of its games have been played without fans unbeaten in all formats against the West Indies, Ireland, Pakistan and Australia.

It is Australias final match of its white-ball tour, with the team having already lost the Twenty20 series 2-1.

Steve Smith was again missing for the Australians after failing to fully recover from being hit on the head from a throwdown in the nets before the first match of the series. Australia captain Aaron Finch said Smith had a hit in the nets on Tuesday but just did not pull up well” and felt a bit groggy.