Battle for revival between Mumbai and Kolkata

Tendulkar and his men had the perfect start in the form of the 19-run victory over last year's finalists CSK. 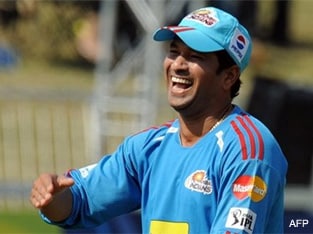 Port Elizabeth: Done in by both the weather god and opponents in their previous two outings, the Sachin Tendulkar-led Mumbai Indians will leave no stone unturned in their bid for a win against the beleaguered Kolkata Knight Riders to revive their campaign in the Indian Premier League here on Monday.

Tendulkar and his men had the perfect start in the form of the 19-run victory over last year's finalists Chennai Super Kings in the tournament opener in Cape Town. Since then, nothing really has gone right for Mumbai, which saw rain washing out their tie against Rajasthan Royals before Deccan Chargers upended them last night.

Not that the Knight Riders had any better luck. Arguably the most hyped team, KKR has been struggling with a host of off-the-field controversies which seem to have become quite a distraction for the Brendon McCullum-led side.

They did manage to shrug off the opening match defeat to the Deccan Chargers with a win over the Kings XI Punjab but the narrow defeat against Rajasthan Royals via 'Super Over' was a body blow to their resurgence bid.

And while the rain god's whim suited them against Kings XI Punjab, the Kolkata outfit had to split points with Chennai Super Kings after steady drizzle didn't allow a single ball being bowled in the match on Saturday.

On paper, Mumbai Indians will have a slight edge over their Kolkata counterparts tomorrow even though both teams have managed a win each so far in the tournament.

Tendulkar himself has been consistently among the runs even though the same cannot be said of his opening partner Sanath Jayasuriya.

JP Duminy shone in defeat yesterday, proving his worth while Abhishek Nayar's nonchalant aggression has come to the fore more than once.

Shikhar Dhawan and Dwayne Bravo, however, have not set alight the stage yet and that would keep Tendulkar worried.

But the Mumbai Indians captain would find some solace in the fact that the Knight Riders are besotted with some problems.

Apart from Chris Gayle and Sourav Ganguly to some extent, the KKR battling line-up has been largely ineffective with McCullum himself failing to lead from the front.

Brad Hodge's reputation as a Twenty20 specialist lies in tatters, while the likes of Moises Henriques, Aakash Chopra, Sanjay Bangar or Yashpal Singh have not been able to make the most of their limited opportunity.

In the bowling department too, Mumbai enjoy a clear edge with Zaheer Khan and Lasith Malinga doing a decent job and Harbhajan Singh spearheading the spin department with aplomb.

For KKR, Ishant Sharma has been average even though rookie Anureet Singh's enthusiasm has won hearts. Ganguly has been largely parsimonious and occasionally successful with his military medium pace.