Bhuvneshwar Kumar returned with a match-winning spell and a series-defining performance in the decider against England in Pune, In a series dominated by batsmen, his accurate, measured and phenomenally restrictive bowling was the difference between the two sides. 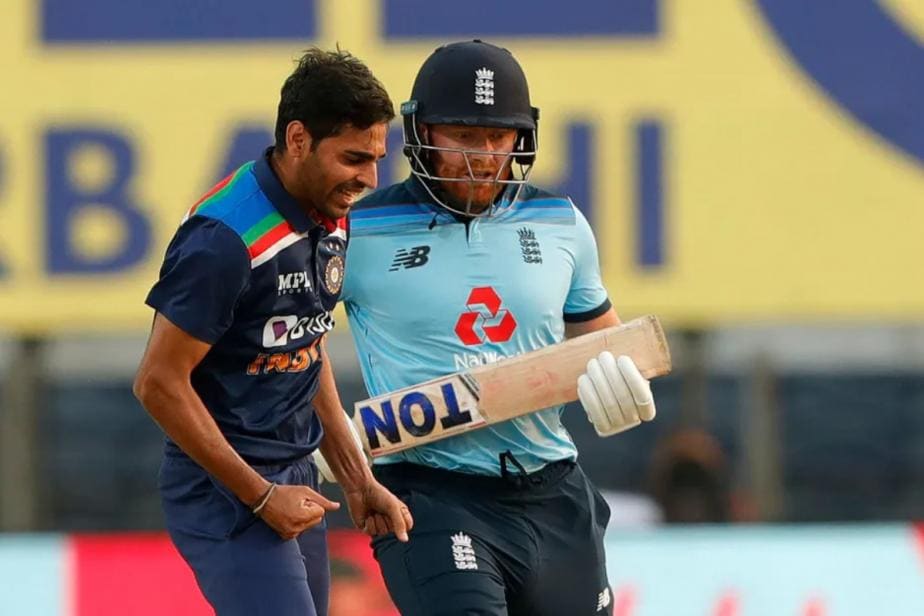 India beat England by just 7 runs in what turned out to be a dramatic end to a keenly contested series between the number one and two ranked teams in the world. Although England got to hold on to their pole position, the home team took the three-match series 2-1. Ironically, in a series dominated by batsmen it was a bowler who stood out and was the unsung hero for the victorious side. Bhuvneshwar Kumar delivered a series-defining performance in the decider and was the highest impact player of the series for his phenomenally restrictive bowling coupled with crucial breakthroughs when all the other bowlers took a beating.

Kumar returned with a match-winning spell of 10 overs, 42 runs, 3 wickets and most significantly 40 dot deliveries! This meant that the opposition batsmen could not score of two of every three deliveries (66.67%) bowled by Kumar in the match – in a high scoring match where the average economy rate was 6.62 this was a sensational performance.

Kumar showed his class in the very first over of the Indian chase. Jason Roy smacked him for three boundaries in the over including two of the first couple of deliveries of the innings but the experienced fast-medium pacer kept his cool and knocked over the stumps of the dangerous English opener off the last delivery of the over – it was a peach of a ball nipping off the pitch on that uncertain length coming back to rattle the stumps. Kumar had given India a huge breakthrough.

He then got the biggest opposition wicket – of the highest run-getter of the series and the centurion of the previous encounter, Jonny Bairstow in his very next over trapping him leg before wicket. Kumar had given England a double blow and a perfect start to India in their defense of 329. He then displayed his quintessential quality in limited-overs – of being an accurate, disciplined, and highly restrictive bowler conceding just 2, 2 and 1 off his next three overs – all bowled within the mandatory powerplay and with Ben Stokes out in the middle.

India vs England, 3rd ODI: Rishabh Pant & I Got Out at Wrong Time, Says Hardik Pandya

India were in the driver’s seat having reduced England to 196 for 6 after 30 overs when captain Virat Kohli recalled his trusted aide Kumar back into the attack. He wanted that final nail in the coffin which would firmly establish India’s supremacy in the decider. Kumar did not disappoint. He got rid of the potentially dangerous Moeen Ali off the third ball of the over.

With the partnership between Sam Curran and Adil Rashid reaching dangerous proportions, Kohli again got his number one bowler back into the attack. Kumar delivered three dot deliveries conceding just three runs of the over. He bowled a magnificent 43rd over increasing the gap between the runs required and balls remaining by giving away just a solitary single in the over. Five of his six deliveries were bowled to Curran who was single-handedly taking the match away from India and had just registered his fifty. That is how good Kumar was – he bowled a tight line and length and mixed up the pace and seam position making it impossible for the left-hander to score.

With 23 needed off 18, Kumar was again asked to bowl the crucial 48th over of the chase. He gave away just 4 runs leaving enough for Hardik Pandya and T Natarajan to defend in the last couple of overs.

Kumar was India’s unsung hero of the series. He bagged six crucial wickets at critical junctures in the match and was the most economical bowler of the series giving away just 4.65 runs per over. He was brilliant with the new ball as well as the death. Kumar picked two wickets but more significantly conceded just 33 runs in his 9 overs in the series opener – again returning as the most restrictive bowler of the match. He delivered as many as 106 dot balls in the series which implied that nearly 60% of his deliveries were not scored off in the series.

In a series which saw 5 of the 6 team totals in excess of 300, Kumar’s economy rate of 4.65, which translates to a team score of approximately 233, was quite simply outstanding.

His accurate, measured and phenomenally restrictive bowling was the difference between the two sides and between victory and defeat.​