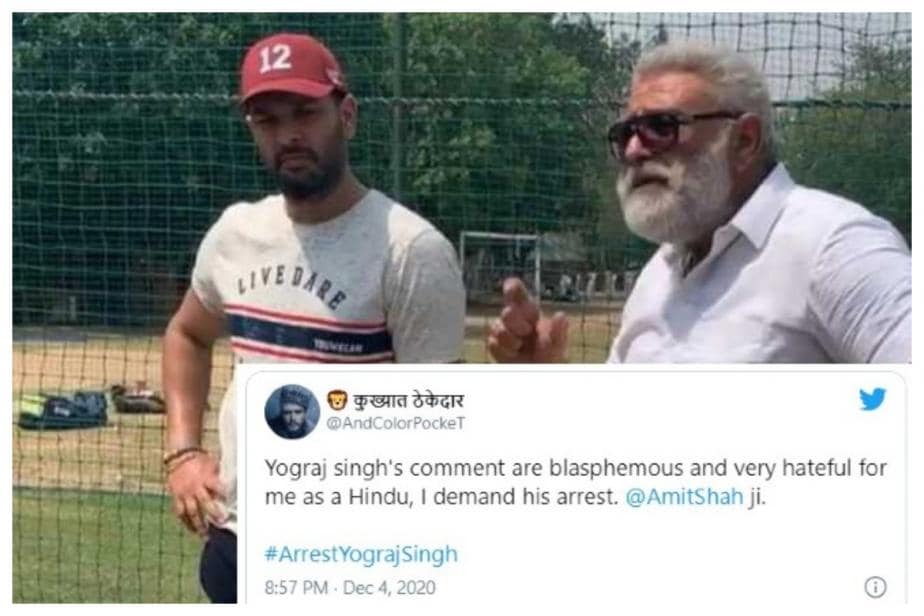 Social Media Keyboard Warriors targeted former India international and two-time World Cup winner  Yuvraj Singh after his father's controversial speech during the ongoing Farmer's protest went viral on Twitter. Yograj Singh recently courted controversy during the protest with a provocative speech that is now being dubbed as Anti-Hindu and as an insult to Hindu women after the video of the speech went viral on social media. Twitter users called for the arrest of the former Indian cricketer, making #ArrestYograjSingh one of the top trends of the morning.

Thousands of farmers are currently staying put at Delhi's borders with Haryana and Uttar Pradesh in protest against the Farmers' Produce Trade and Commerce (Promotion and Facilitation) Act, 2020, the Farmers (Empowerment and Protection) Agreement on Price Assurance and Farm Services Act, 2020 and the Essential Commodities (Amendment) Act, 2020. They have expressed apprehension that these laws would pave the way for the dismantling of the minimum support price system, leaving them at the "mercy" of big corporations. However, the government has maintained that the new laws will bring farmers better opportunities and usher in new technologies in agriculture.

Ready for Written Assurance on MSP, Says Govt Ahead of Fifth Round Talks; Farmers Call Bharat Bandh on Dec 8

Here's what Twitter users had to say about Yograj Singh's participation in the protests and how they targeted Yuvraj Singh:

Yuvraj Singh has a bigger cancer in his life: Yograj Singh.#ArrestYograjSingh

Everytime Yogiraj opens his mouth about Cricket or Country .

Does Yograj Singh f/o Yuvraj Singh not know that 10 of the Sikh gurus were son of Hindu mothers? He must be arrested for abusing Hindus & calling Hindu women as prostitute.#ArrestYograjSingh pic.twitter.com/zK8Ec8ZdQM

Why everyone is tagging Yuvraj Singh @YUVSTRONG12 into this mess ....