Denesh Ramdin led Guyana Amazon Warriors to a nervy three-wicket win over St Lucia Zouks at the Providence Stadium in Georgetown on Friday. 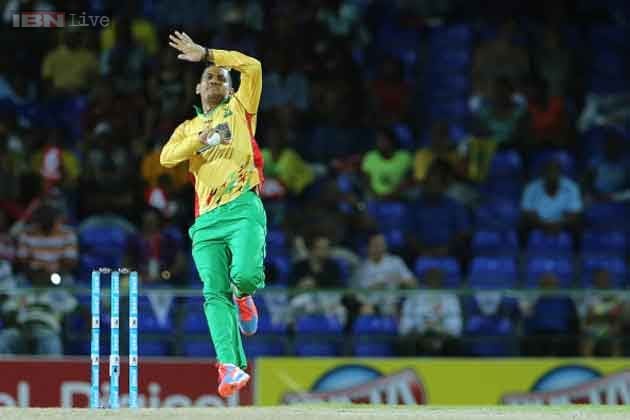 An unbeaten 39 from a steely Denesh Ramdin led Guyana Amazon Warriors to a nervy three-wicket over St Lucia Zouks at the Providence Stadium in Georgetown on Friday (July 17). A fourth win in eight games meant they were now up to the second spot in the Caribbean Premier League 2015 standings.

Chasing 112, Guyana sensationally slipped from a comfortable 59 for 1 to 89 for 7, with Sunil Narine picking three wickets to elevate St Lucia's hopes of a come-from-behind win. But Ramdin found an able ally in Veerasammy Permaul, who contributed nine vital runs, as Guyana crossed the finish line with two overs to spare.

St Lucia, who were asked to bat first, didn't have any momentum to ride. Only three batsmen crossed 20, with South Africa's Henry Davids top scoring with an unbeaten 25.

Hopes of a dynamic start from Johnson Charles (11) and the in-form Andre Fletcher (15) were nipped in the bud. Kevin Pietersen then got in and briefly flourished, hitting two fours and a six in his 21-ball 24 before being foxed by Narine.

Narine, seeking to rediscover his old touch following a remodeled bowling action, had Fletcher and Pietersen trapped leg before wicket and then went on to dismiss Derlorn Johnson for a first-ball duck courtesy a mishit that was well taken by Marchant de Lange.

The innings was all about the 43-run stand between Davids and Ross Taylor (20) that helped them cross the 100-run mark and give the bowlers an outside chance of a miracle win.

Guyana began like a bullet train as Lendl Simmons, who has proved himself in the shortest format courtesy his exploits with the Mumbai Indians in the IPL, hammered five fours in his 31, but Keron Cottoy, the legspinner, wasn't giving up yet.

His four quick strikes converted a comfortable chase into a game of nerves. When Umar Akmal (7) was dismissed, Guyana needed just 25 in six overs, but had only three wickets to spare. But the experience and steel of Ramdin prevailed eventually as St Lucia were rooted to the fourth spot in the six-team league.