Champions Trophy 2017, India vs Sri Lanka: As It Happened

Catch all the action of the blockbuster Champions Trophy 2017 clash between India and Sri Lanka at the OVAL through our LIVE blog.

A memorable chase by Sri Lanka keeps their #CT17 hopes alive as they beat India by 7 wickets in a thriller!https://t.co/3VzGviqIok #INDvSL pic.twitter.com/0uQXq8XTio

Sri Lanka have done it. They have beaten India by 7 wickets. This loss will give India a few things to think about. Nobody gave Sri Lanka a chance before the game, but here they are getting over the line with eight deliveries to spare.

Four and Fifty: Mathews dances down the track and hits it over Yadav's head for a boundary. It also brings up his fifty.

Dissapointed Indian supporters are now slowly leaving the stadium. They believe it is all over for the men-in-blue. Just some hours back they were cheering and dancing but now they leave with sad faces. Such is cricket!

Four: Short and wide from Bhuvneshwar and Mathews crashes it past point with disdain. Mathews has played an outstanding hand today. He knew he had to deliver to get Sri Lanka home.

Six: Sri Lanka are doing it on a canter now. Gunaratne goes down on one knee and sweeps Jasprit Bumrah for a six. What a talented player this man is! You need guts to do something like that against a pacer bowling at over 140 kmphr.

Four: Bhuvneshwar Kumar now hurls one in the middle of the pitch and Gunaratne smashes it through square leg. Kumar who has been on the only bright spark for India so far is also feeling the pressure now. The last ball of the over too is hit through the offside and into the fence by Gunaratne. 11 runs have come off the over.

Six: Gunaratne looked troubled after the first three deliveries but he smacks the fourth one for a huge six over deep fine leg. Exquisite timing from the right-hander.

Kusal Perera has retired hurt at 47. It looks like it is a hamstring injury. He had been hobbling around for a while now and seems like a sensible decision to go off the field.

Six runs of the Bhuvneshwar  Kumar over. But the others in the Indian team are finding it difficult to contain the Sri Lankan batters. Both Mathews and Perera have dispatched anything that has been bowled loose to them.

Angelo Mathews clips the penultimate delivery of the 42nd over gleefully to the ropes. Fast and into his pads, just how the Sri Lankan captain likes it. Yadav gives away 10 runs again in the over. Sri Lanka are doing it easily at the moment.

Boundary: Loose from Yadav again. He bowls a half-volley right in the slot for Mathews, who lifts it over mid off for a four. Sri Lanka get the early boundary in the over.

Four: Perera strikes one towards mid wicket and it is a misfield from Kedar Jadhav at the fence. Kohli is livid he stamps his foot on the ground with disgust. This is just sloppy from the little man.

250 comes up for Sri Lanka. Very few expected them to get this far after losing just three wickets. This has been one of the finest batting efforts from the Lankans in recent times.

CricketNext's Arnab Sen reporting from the Oval: Umesh Yadav has been pretty unimpressive in the second spell, his line and length are both inconsistent. India needs him to be on the money to pull this one off.

CricketNext's Arnab Sen reporting from the Oval: This is turning out to be the best match of the tournament so far. Sri Lanka have benefitted from some great spirit shown by their batsmen, who have kept them in the game. Angelo Mathews and Kusal Perera are accomplished batsmen and good T20 players, so a required rate of 8 runs per over in the final 10 with 7 wickets in hand should be a walk in the park.

Four: Umesh Yadav bowls a back of a length delivery and Mathews goes over mid-wicket with a wristy heave. This shot was premeditated.

Under the circumstances the 39th over was a brilliant one from Bhuvneshwar who gave away just five runs. This is exactly what India needs at this stage of the game, a few quiet overs.

India need quick wickets if they have to turn the game around. It is slowly getting away from Virat Kohli and his men. India would have breathed a sigh when they got to 321, but the target now looks well within Sri Lanka's radar.

Boundary: Pandya is proving to be quite expensive today. This time Perera charges down the track, makes room for himself and clubs it over mid off. 11 runs have come of the Pandya over. Sri Lanka are on a roll here.

Four: Angelo Mathews knew the fne leg was inside the circle and so he just helped it on its way past the man and into the ropes. What timing! from the Sri Lankan captain.

Four: What a shot that is from Kushal Perera. Jadeja goes round the wicket to the left-hander and he reverse sweeps him over the top for a boundary. At this rate Sri Lanka will do it easily.

Pandya has been expensive today. He hasn't quite got his act together but he has comeback well and has given away just three runs of the 35th over.

Four: Wide delivery from Jadeja and Kusal Perera hits the ball square of the wicket for his first boundary of the innings. Reckless shot from Perera but it got the due result which he needed.

WICKET! What a throw from Bhuvneshwar Kumar! Kusal Mendis goes for 89.

Out: Bhuvneshwar Kumar run-out Kusal Mendis to further peg back Sri Lanka. The batsmen tried to go for a cheeky single but Bhuvi took the ball and hit the bulls-eye. Replays showed Mendis was miles away from the crease.

MS Dhoni is saying from behind the stumps: Last over finish kar Cheeku (Virat Kohli's nickname). It is safe to say that this is Kohli's last over and we will see a bowling change.

Virat Kohli is now into his third over and it is safe to say that he is making things happen. Few close catching chances and few that have missed the outside edge of the bat. Kohli has bowled well so far and has given 15 runs in 2.4 overs.

Chance: Virat almost had Kusal Mendis off his bowling but the edge evaded him by some inches. India could have had the perfect few last overs had Kusal been dismissed by Virat here. 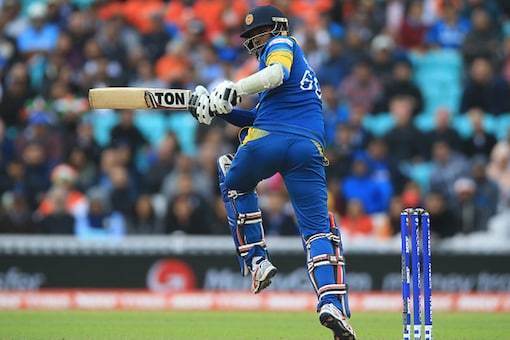 IND vs SL Preview Virat Kohli and boys are upbeat going into their second game of the Champions Trophy against Sri Lanka at the Oval. With the wicket wearing a green look, Kohli is upbeat.
Gone are the days when a tinge of grass in English conditions would send shivers down the spine of Indian teams. This Indian team has four in-form pacers, all capable of making the ball talk, thus making the captain a happy man.
“It feels good to have four or five bowlers who can change the game. It also boosts the confidence of the batsmen,” an upbeat Virat Kohli said.
The Indian team’s practice session was in marked contrast to that of Sri Lanka. Everybody was geared up, there was a lot of chirping and both the batsmen and the bowlers went in full steam.
The conditions and the fact that India won the first match could well mean that Ravichandran Ashwin may be asked to sit out once again. The senior spinner did spend a lot of time bowling in the nets and that too to captain Kohli, who said that the off-spinner had no qualms in being left on the bench if the conditions required so.
“Ashwin is a high class bowler and is very professional as well. He understood the dynamics of the side we picked for the last game. He told me that I support you with whatever you want to do and that has been our equation always,” the Indian captain added.
All four Indian top order batsmen scored fifties in the match against Pakistan and all four looked in pristine touch in the nets, middling most of the deliveries that came their way.
Yuvraj Singh, who stole the show with his cameo, was seen discussing his footwork and the initial trigger movement with batting coach Sanjay Bangar for a very long time. While not much can be commented on the conversation, but Yuvraj looked pretty comfortable, just as he was in the previous match.
While the result of the match looks like a foregone conclusion with India looking all prepared to steamroll the Lankans, the Indian captain hinted that there is no room for complacency, knowing very well that stranger things have happened on a cricket field.
“Sri Lanka are among the top eight teams and has done really well in ICC tournaments. They have talented players in their team who are young and can deliver match winning performances on their day,” Kohli said.


Conditions
The weather is predicted to be cloudy but dry, meaning we are likely to get a full game. There was a bit of grass on the surface, and with cloudy over head conditions, you can expect the pitch to assist the fast bowlers for atleast the initial overs.