Virat Kohli's knock of 122 against England at Pune on Sunday was the 15th time he had scored a century in a successful run chase, which puts him one ahead of his idol Sachin Ramesh Tendulkar. 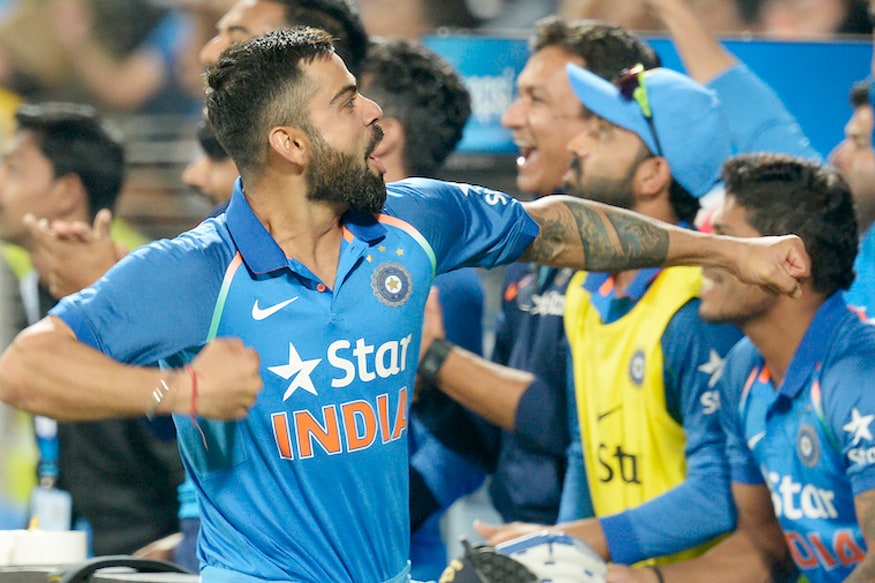 New Delhi: Virat Kohli is poised to break many records in international cricket, but when you break the record of a man you idolised while growing up, it has to be special.

Virat Kohli's knock of 122 against England at Pune on Sunday was the 15th time he had scored a century in a successful run chase, which puts him one ahead of his idol Sachin Ramesh Tendulkar.

Here's a list of Kohli's 15 centuries in successful run chases.

This was Virat's 14th ODI and he came into bat at 23/2 after Sehwag & Tendulkar were dismissed. Virat showed great maturity to string together a 224-run stand with fellow Delhi batsman Gautam Gambhir, which put India on the path to victory.

The target wasn't big enough but the pitch wasn't the easiest to bat on. Kohli, who came in to bat in the 12th over, held the innings together even as he played shots in all parts of the park. His unbeaten 102 in just 95 balls guided Team India to an easy victory.

Australia's Clint McKay had sent back the India openers early and Kohli was yet again under pressure to play a long innings to put the chase back on track. Kohli put together a 137-run stand with Yuvraj Singh and got India back in the reckoning. While Yuvraj departed in the 34th over, Kohli carried on and shared an 84-run stand with Raina to all but take India to a win. By the time Kohli was dismissed, victory was in sight and was duly achieved.

The bowlers had set the stage for India to complete an easy win, but Kohli and Gambhir were in a mood to turn it into a rout. Kohli went on a rampage, hitting 16 boundaries to stay unbeaten on 112 in just 98 deliveries as India overhauled the target in the 37th over.

The Windies had put up a challenging total and their bowlers made the chase even more stiff for India by reducing the hosts to 84/3. But Kohli was in no mood to throw in the towel as he put his head down to string together a 163-run stand with Rohit Sharma to pave the way for an Indian win.

This was the knock that showed the world Virat Kohli's destructive powers as a batsman and the full array of shots that the man possessed. India needed a massive boost to their run-rate if they were to stand a chance to enter the final of the tri-nation tournament in Australia. But Sri Lanka piled on a massive total batting first. Just when everything seemed lost, Virat Kohli hit top gear. Dispatching bowlers like Lasith Malinga to all parts of the Bellerive Oval, Kohli hit 16 boundaries and 2 sixes to take India to an improbable win in just 36.4 overs. Kohli stayed unbeaten on 133.

India met Pakistan in the Asia Cup after an unexpected loss against Bangladesh in the previous match. Pakistani batsmen piled on the misery on the Indian bowlers by scoring a total well in excess of 300. It was do-or-die for India. In came Virat Kohli and played the innings of his one-day international career. Virat made mincemeat of the Pakistani attack as he scored a career-best 183 in just 148 balls. His knock, studded with 22 boundaries and a six, was the cornerstone of yet another memorable Indian victory over Pakistan.

India needed a victory to seal the series, but a relatively easy chase became tricky as the 'men in blue' were 3 wickets down for just 60 runs on the board. By now Sri Lanka knew about Virat Kohli's ability to bat under pressure and take India home from precarious situations. And they got a taste of the same as Kohli played a brilliantly controlled knock. Yet again the India no. 3 was unbeaten as he took the team home.

Yet another imperious knock, this time against a not so difficult bowling attack. But the runs still needed to be made and Virat Kohli was not going to let go of an opportunity against a team like Zimbabwe.

The Australians were in India and they had won the first ODI. India needed to bounce back but the Aussies amassed 359 on a placid Sawai Mansingh Stadium wicket. Indian openers Shikhar Dhawan and Rohit Sharma laid the foundation with a 176-run stand. While Rohit Sharma remained unbeaten on 141, it was a Virat Kohli blitzkrieg that stole the show. Virat was in a mood to punish the Australians as he hit 8 boundaries and 7 sixes to bring up an unbeaten ton in just 52 deliveries. The Aussies had no place to hide.

It was a feeling of deja vu for the Aussies as Virat Kohli took them apart for the second time in the series. The Aussies needed a win to clinch the series and piled up 350 while batting first. But the Indian openers gave a good start yet again. Rohit Sharma's wicket brought Kohli into the middle and he did what he does the best. Kohli's willow yielded boundary after boundary as he scored an unbeaten 116 in just 66 balls. His innings was studded with 18 fours and a six.

It was the Asia Cup again and this time Virat showcased his prowess in front of the home team. Chasing a fairly stiff target of 279, Kohli took control of the innings after the openers departed early. A 213-run partnership with Ajinkya Rahane put the India on track for victory.

Team India was looking to complete a 5-0 whitewash over the Lankans at Ranchi. But an Angelo Mathews century had given Sri Lankan bowlers a big enough total to defend. The Indian openers departed early and yet again Kohli had to build the foundation of a chase. The brilliant architect that he is, Kohli first shared a century stand with Ambati Rayudu and then took complete control of the innings. Wickets kept falling at the other end but Kohli remained calm to stay unbeaten till THE end yet again as India reached home with more than an over to spare.

It took Virat Kohli almost 2 years to finally equal Sachin Tendulkar's record of 14 centuries in successful run chases. Virat shared a 151-run stand with Dhoni to put the Indian chase on track and then unleashed his power strokes to completely deflate the Kiwi attack. This was the 8th time that Virat stayed unbeaten as he guided India to victory.

This has to be the most special knock for Virat Kohli as it came in his first match as official captain of the Indian ODI team. With the score reading 63/4 with the English pacers running riot, all hopes of victory had vanished. But Kohli being Kohli, kept going in the company of Kedar Jadhav, who too played a fabulous knock and scored 120 in just 76 balls. Kohli played second fiddle to the attacking Jadhav and then upped the ante at the right time to get the run rate down to close to six runs an over. He wasn't there to see his team through, but had laid the foundation of a great run chase.