KXIP vs RR IPL 2020: WATCH - Furious Chris Gayle Throws Bat in Anger After Getting Out for 99 to Jofra Archer

One more run in the match would have seen Chris Gayle cross the triple-figure mark for the 23rd time in T20s. But, that was not to be as he was undone by a sharp yorker from Jofra Archer in the final over of KXIP innings. 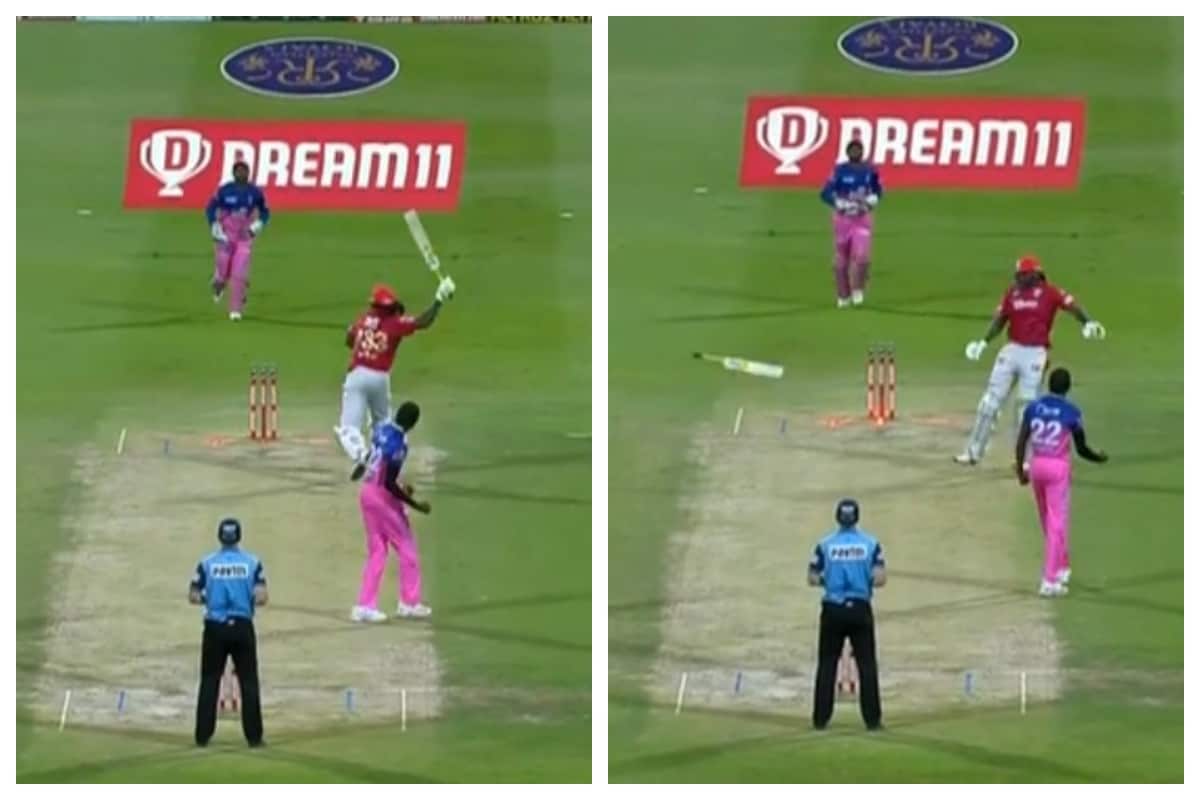 Chris Gayle lit up the Abu Dhabi Cricket Stadium on Friday night scoring 99 off just 63 balls, hitting eight sixes, and becoming the first player in T20s to hit 1000 sixes. But, his knock was not enough as Rajasthan Royals trumped Kings XI Punjab in Match 50 of IPL 2020, staying alive in the race for the playoffs. Gayle holds almost all batting records in T20 cricket and one more run in the match would have seen Gayle cross the triple-figure mark for the 23rd time in T20s. But, that was not to be as he was undone by a sharp yorker from Jofra Archer in the final over of KXIP innings.

Gayle, who was left out of KXIP's first seven games, has had a major impact on the team's turn of fortunes, managing three fifty-plus scores in the six games he has played with the team winning five of them. The loss to RR halted their five-match winning streak. And when he was dismissed on 99, Gayle was not happy and lost his cool, throwing his bat to the ground in frustration. Archer was perplexed for a moment with Gayle's act, but the Universe Boss made it up to him by extending a low handshake, appreciating his effort. Archer responded back and all was well. Gayle has been fined 10 percent of his match-fee for breaching the Indian Premier League’s (IPL) Code of Conduct during his team’s match against Rajasthan Royals at Abu Dhabi.

As for the match, Star England all-rounder Ben Stokes stole the limelight from Chris Gayle as Rajasthan Royals clicked as a unit to beat Kings XI Punjab by seven wickets and stay afloat in the Indian Premier League here on Friday. Stokes hit a 26-ball 50 and also claimed two wickets to emerge as the star performer for his team. Earlier, Gayle had smashed a 63-ball 99 to power KXIP to 185 for four but it went in vain. Chasing 186 for a win, RR overhauled the target in 17.3 overs with Stokes top-scoring with a magnificent 26-ball 50. Sanju Samson was also equally impressive during his knock of 48 from 25 balls.