We look at some of the most notable instances of cricketers having braved injuries to come out on to the pitch and play for their team, over the years.

Tamim Iqbal's Asia Cup 2018 should have been over just two overs into the first game when he got hit on the wrist by a Suranga Lakmal delivery. Soon after he left the ground in pain, scans revealed a fracture which officially ruled him out of the tournament. Tamim was seen sitting in the dressing room with a sling - not a happy sight at all.

But it wasn't the end of Tamim's campaign. With Bangladesh reduced to 229 for 9 in the 47th over and Mushfiqur Rahim battling alone with a century, Tamim walked in to bat and give Mushfiqur support, despite being injured. Tamim's hand was taped - he even made a hole in his glove to accommodate the tape - but played a crucial role in Bangladesh extending their score beyond 260. Tamim played only one ball - incidentally off Lakmal again - but more importantly was at the other end while Mushfiqur did the scoring.

We look at other such instances where cricketers have braved injuries to battle it out for their teams. Anil Kumble bowls on with heavy strapping on his jaw. Image: AFP

Mervyn Dillon's menacing bouncer smashed Kumble's mouth, resulting in the Indian spitting out blood. Perhaps not knowing the severity of the injury, Kumble batted on for a brief time before eventually falling to Dillon.

Soon after, Kumble would have got to know the severity of the blow. His jaw was fractured and he was ruled out of the remainder of the tour. The spinner was to fly back the next day, but that didn't stop him from walking out with heavy strapping on his face, and the ball in his hand. Kumble bowled 14 overs, and even got the wicket of Brian Lara! The South African captain was forced to retire hurt in the first innings on 30 when a Mitchell Johnson delivery broke his left hand. Smith took no further part in the game, until he bravely walked in at No. 11 in the fourth innings to try and save the match for his team.

Set a target of 376, South Africa battled hard but slipped to 257 for 9, with Makhaya Ntini at one end. When Dale Steyn became the ninth man out, the Australians would have thought the game was done but out walked Smith to a rousing reception. Smith struggled to hold his bat with the bottom hand, and Australia were in no mood to show mercy either. Johnson & Co kept firing thunderbolts, but Smith braved on for nearly seven overs, facing 17 deliveries himself. He took South Africa within 10 balls of a draw, but a Johnson delivery sneaked in through the gate to dismiss Smith. Marshall could bowl only six overs in the first innings as he injured his thumb while trying to field the ball on the very first morning of the Test. Over the next two days, West Indies bowled England out for 270 and reached 290 for 9 in their innings, when Marshall - with two fractures on his left thumb - walked out to bat. Marshall couldn't hold the bat with his top hand, but hung around for a while batting with only hand! He batted eight balls, and helped Larry Gomes score a century.

But that was not all. Marshall returned with the ball in the second innings and took 7 for 53, as England were bowled out for just 159. West Indies then won easily, by an eight-wicket margin. The fourth Test at Manchester turned out to be an unforgettable one for Broad, for multiple reasons. He bagged 6 for 25 in the first innings, which earned him the Man of the Match award. However, he also had to endure pain as a pacy bouncer from Varun Aaron sneaked through and broke his nose while batting. As a result, Broad couldn't take part in the second innings.

However, he was back for the next Test at Lord's. Wearing a mask to protect his nose, Broad picked up three wickets in the game that England won. He put his fears behind and batted too, scoring 37 off 21 with five fours and a six. 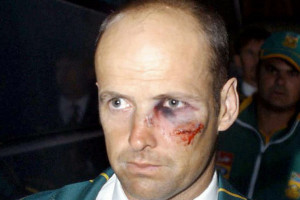 Kirsten was going strong and scored a half-century when Shoaib Akhtar found a way through his helmet with a quick bouncer. Kirsten had to retire for 53 on the first morning, and South Africa were bowled out for 320. Scans later revealed Kirsten had a broken nose. Pakistan responded with 401 in their innings, mounting pressure on South Africa.

South Africa reached 149 for 4 in their second innings, leaving the game in the balance. In walked Kirsten, his face still showing bruises from the blow. He showed tremendous grit and made 46 off 93 balls, before South Africa were bowled out for 241. Pakistan went on to win the game by eight wickets. After scoring 271 in the first innings, South Africa began strongly with the ball, reducing New Zealand to 9 for 2. Neil Adcock and David Ironside were in the midst of a menacing spell on a tough wicket, striking the batsmen on their bodies regularly.

One such blow hit Sutcliffe on the side of the head, and he left the field with the score still on 9 for 2. Subsequent X-rays showed Sutcliffe had a split earlobe, but seeing his colleagues suffer, he decided to bat again. In an extraordinary display of bravery and determination, Sutcliffe scored an unbeaten 80, which also included 25 runs in an over off Hugh Tayfield, a record that stayed for 50 years. It wasn't enough to win the game for his side, but Sutcliffe's brave knock still remains in memory. It was perhaps one of the most thrilling draws in Test cricket. Chasing 234, England had a see-saw innings with fortunes swinging both ways. At 72 for 3, Wes Hall struck Cowdrey, resulting in a broken arm. Cowdrey had to retire hurt.

The situation boiled down to 8 off 6, with England having two wickets in hand. With six to win off three, Derek Shackleton was run out. Cowdrey walked in again with a plastered hand, and England saw out the remaining balls, managing to draw the game.