IPL 2020, CSK vs DC Today's Match at Dubai, Highlights: As It Happened

IPL 2020 Live Score, Chennai Super Kings vs Delhi Capitals Live Updates - IPL 2020 live score CSK 98-4: OUT! Nortje traps Jadhav plumb in front of the stumps and the umpire has no hesitation raising the finger. Dhoni is out now with Du Plessis.

IPL 2020 live score CSK 131-7: In a bid to lessen the margin of defeat, Dhoni goes for a big shot on the the 3rd ball and top edges one that Pant collects. The innings ends with Jadeja cutting one straight to Mishra. DC win by 44 runs, a comprehensive win!

IPL 2020 live score CSK 127-5: Nortje bowls two wides in the penutimate over but still only goes for the 6 runs. Barring some miracle DC have won this as CSK need 49 in the last over.

IPL 2020 live score CSK 113-5: Avesh Khan's final over goes for 10, with Dhoni getting two boundaries. Du Plessis is then dropped by Hetymer off Rabada in the start of the next over but the next ball sees him edge one to Pant and he has to walk!

IPL 2020 live score CSK 98-4: OUT! Nortje traps Jadhav plumb in front of the stumps and the umpire has no hesitation raising the finger. Dhoni is out now with Du Plessis.

IPL 2020 live score CSK 95-3: Another big over for CSK as they take 11 off Rabada. Du Plessis begins the over with a boundary towards mid-wicket and Jadhav plays a delicate short past third man later in the over.

IPL 2020 live score CSK 84-3: Avesh Khan has had a match to forget. His 3rd over goes for 13 runs including two fours. CSK may well just look to score a few and not lose too many wickets to mitigate the NRR blow.

IPL 2020 live score CSK 71-3: Mishra had been economical thus far but his 3rd over goes for 11 runs, including one boundary off Du Plessis. Timeout has been taken as Chennai need 105 runs from 7 overs. Quite the ask.

IPL live score CSK 60-3: Mishra follows up with a tidy 11th over that goes for 6 but Avesh Khan's over after that is eventful. Du Plessis smacks the third ball for four but gets a reprieve in the fourth ball as he skies one that Hetmyer misjudges and drops!

IPL 2020 live score CSK 47-3: OUT! First ball after the timeout sees a wicket fall. Du Plessis plays one off the pads and Gaikwad for some reason rushes down the pitch and is turned away only when halfway down. Pant does well to collect and throw, Axar does the rest.

IPL 2020 live score CSK 41-2: Spin from both ends now as Amit Mishra and Axar bowl the 7th and 8th over. 7 runs come off the two overs. CSK are struggling for runs here.

IPL 2020 live score CSK 34-2: Nortje's second over doesn't start well as he's hit for Du Plessis for a boundary. But he ends it with getting Vijay to hole out to Rabada and DC have claimed two.

IPL 2020 live score CSK 23-1: OUT! Axar with a half-tracker that Watson gets a hold off but he doesn't get enough on it and Hetmyer catches him by running in from the deep.

IPL 2020 live score CSK 22-0: Expensive over from Avesh Khan. Starts with Watson tonking him for four past mid-on and ends with the same batsman smacking him for six over long-on.

IPL 2020 live score CSK 10-0: Axar Patel's second over goes for 9, including one boundary by Watson. Anrich Nortje comes on for the third over and concedes just the one run.

IPL 2020 live score CSK 2-0: We are back underway and Kagiso Rabada begins with a wonderful over. Five dots followed by one that goes for two. Murali Vijay and Shane Watson have a task in hand alright.

IPL 2020 live score DC 161-3: What an over from Sam Curran. He concedes just 4 runs and gets the wicket of Iyer as he edges one and Dhoni flies to his right and takes a brilliant catch.

IPL 2020 live score DC 157-2: Hazlewood had been economical up to that point but his 3rd over is expensive and goes for 11 runs, including 2 boundaries. CSK need wickets.

IPL 2020 live score DC: 146-2 The over starts with two singles and a double before Chahar sprays a full toss onto Iyer's pads and he dispatches it for four with nonchalance. Another two twos end the over.

IPL 2020 live score DC 134-2: Four runs come off a needless overthrow to start the over and then some consistent running sees Delhi take 10 off the over. Can they up the ante now?

IPL 2020 live score DC 124-2: The 14th over starts with 3 singles before Pant plays a beautiful cover drive off Chahar and collects a boundary. That is followed by a single and a double.

IPL 2020 live score DC 113-2: Pant begins the 13th over by smacking Jadeja for a boundary towards fine leg. Four singles are taken from the over and 8 runs come off it.

IPL 2020 live score DC 103-1: OUT! Shaw goes in slightly unusual circumstances. He charges down the ground and the ball hits his pads and trickles towards Dhoni, who grabs the ball and stumps the youngster. His good knock comes to an end.

IPL 2020 live DC 102-1: The 100 is up for Delhi now. Shaw continues the onslaught, getting Jadeja away for a boundary towards third man with a late cut. 180-odd seems well in sight for them.

IPL 2020 live score DC 94-1: FOUR AND OUT! Dhawan smacks one straight over Chawla's head but the bowler responds in the next ball, trapping him plumb in front of the stumps and CSK have their first wicket.

IPL 2020 live DC 88-0: Fifty for Shaw! What a knock this has been from the young man. He's been the more aggressive of the two and will want to keep going now. Dhawan also gets in on the act with a four to deep extra cover and Shaw ends the over with a six to deep mid-wicket!

IPL 2020 live DC 71-0: Shaw is now dealing in boundaries. He gets one away with an inside out shot and then follows that with a charge down the ground and a slap over the extra cover zone. Something goes in Shaw's eyes though and so the timeout is taken.

IPL 2020 live DC 62-0: Spin comes into the attack now as first Piyush Chawla then Ravindra Jadeja come into the attack. Chawla is smacked for two fours whereas Jadeja is hit for a six and a four.

IPL 2020 live score DC 36-0: Hazlewood's second over is as good as his first and goes for just the 3 runs. Chahar follows up with another good over that goes for six. And that is the end of the powerplay.

IPL 2020 live score DC 27-0: Shaw is in no mood to wait. He starts Curran's second over with a four, which is followed by two dots and another four. Curran sprays one down leg side for wide before Shaw takes two runs off the penultimate ball. Ends the over with a single. 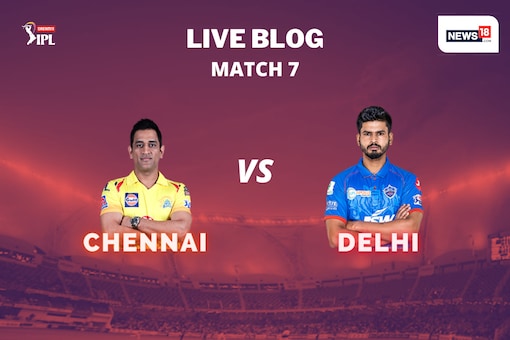 IPL 2020 Live Score, Chennai Super Kings vs Delhi Capitals Live Updates – IPL 2020 live score CSK 131-7: In a bid to lessen the margin of defeat, Dhoni goes for a big shot on the the 3rd ball and top edges one that Pant collects. The innings ends with Jadeja cutting one straight to Mishra. DC win by 44 runs, a comprehensive win!

Preview: Chennai Super Kings (CSK) have dominated the rivalry with Delhi Capitals having won 15 of the 21 encounters against them.

They beat them in all the 3 encounters in the previous edition in 2019 and thus will come into the match in Dubai with a big psychological edge.

DC will however, feel confident after snatching victory from the jaws of defeat in a thrilling Super Over finish against Kings XI a few days back in Dubai.

CSK had a strange match against RR at Sharjah and though the scorecard separated the two teams by just 16 runs, they were never really in the chase. MS Dhoni’s initial reluctance to go for the target was baffling to say the least!

DC will hope for a better show from their top 3 – Prithvi Shaw, Shikhar Dhawan and Shimron Hetymer – they were all dismissed for single-digits against KXIP.

Rishabh Pant will hold the key in the middle order and will remain the difference between a par score of 160 or a winning total of 180-plus should they bat first.

Kagiso Rabada was brilliant against KXIP but DC will hope from a better performance from Mohit Sharma who went for 45 in his 4 overs. Ishant Sharma is still recovering from a back spasm and will most likely again miss out being in the playing XI.

DC will be relieved that R Ashwin who suffered a dislocated shoulder in the match against KXIP, is fit to play and along with Axar Patel will form a crucial spin partnership in the middle overs.

The CSK middle order looks a tad weak in the absence of Suresh Raina and with the hamstring injury to Ambati Rayudu. Faf du Plessis has been their most sought after batsman and there will be a lot of pressure on him to deliver yet again.

Murali Vijay has looked out of sorts in the two outings thus far and not only does he need a significant performance but also a push-on in the powerplay. Captain Dhoni needs to show more initiative and bat at Number 5 or 6.

Lungi Ngidi has been very expensive and could be replaced with the line and length specialist, Josh Hazlewood. Another concern for MSD would be the bowling of Ravindra Jadeja – he has been tonked for above 10 an over in both the matches so far.