The indefinite suspension of the ongoing IPL, due to a breach in the bio-bubble, caused mayhem and the foreign players along with the staff were made to say goodbye before the scheduled wrap up

Australian and Indian Premier League’s Sunrisers Hyderabad’s former captain David Warner is known for his good humour. His regular posts on Instagram keeps his fanfam updated with his day-to-day life chores. The skipper’s opening remarks on Instagram are captioned, “Father of three Ivy Mae, Indi Rae and Isla Rose. Husband to the rock Candice Warner. They are my world”, which defines him as “husband-father perfect”.

The indefinite suspension of the IPL, due to a covid-19 outbreak inside the bio-bubble, caused mayhem, and the foreign players along with the staff were made to say goodbye before the scheduled wrap up. Adding to the woes was the ban on Indian flights to Australia, owing to which Warner is undergoing a mandatory quarantine in the Maldives before travelling back to his homeland.

In his latest Instagram posts, Warner can be seen through the eyes of his little angels. He went ahead and captioned it as “My gorgeous Ivy ❤️❤️❤️ so much love”

Clearly family comes first for Warner and his munchkins are indeed missing their father. In a more recent post that captioned, ” Indi doing her first project for school. Her favourite place Coogee Rockpool. Very creative little girl and even the detail on daddy’s Moustache is good. #love #family @candywarner1 miss you all”, shows how well-connected the skipper is with his family.

The post has garnered over 230k likes and counting, his wife’s witty reply  captioned “I’m a little concerned for Isla’s safety in that pool on her own. ❤️” also garnered a lot of reactions and likes. The fanfam got all nostalgic and had a lot to comment like “Just think of the amount of noise produced when you’ve played in hyderabad!,Wait for it!”, “Hahaha sooo sweet INDI !
Just Adorable cutie” 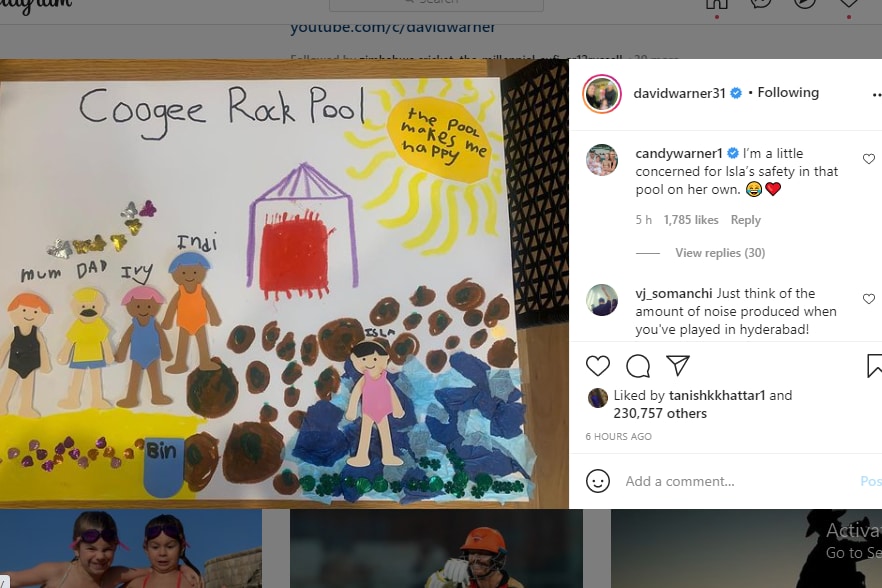 Nonetheless, we all know Warner is not only a favourite in India but also in his family.

Earlier the 2016 champions SunRisers Hyderabad had removed Warner as their captain following their fifth loss of the season at the hands of MS Dhoni-led Chennai Super Kings (CSK).

New Zealand’s Kane Williamson was appointed the new SRH captain. And to make matters worse for Warner, he was also dropped from SRH’s playing XI. However, the change in captaincy did not alter Hyderabad’s fortune as they lost their next game, too, at the hands of Rajasthan Royals (RR) by 55 runs.