Devon Conway walks back to the pavillion after getting dismissed by England's Stuart Broad.

In Warner’s upload, English pacer Broad can be seen celebrating.

English pacers produced an amazing display in the first Test against New Zealand as the Kiwis were bundled out for a mere total of 132. James Anderson and Matthew Potts picked up four wickets each while veteran bowler Stuart Broad and skipper Ben Stokes scalped one wicket each in the first innings to secure an advantage.

And the dismissal forced Australia’s David Warner to share a funny story on Instagram. In Warner’s upload, English pacer Broad can be seen celebrating. “Devon Conway I feel your pain,” Warner wrote. 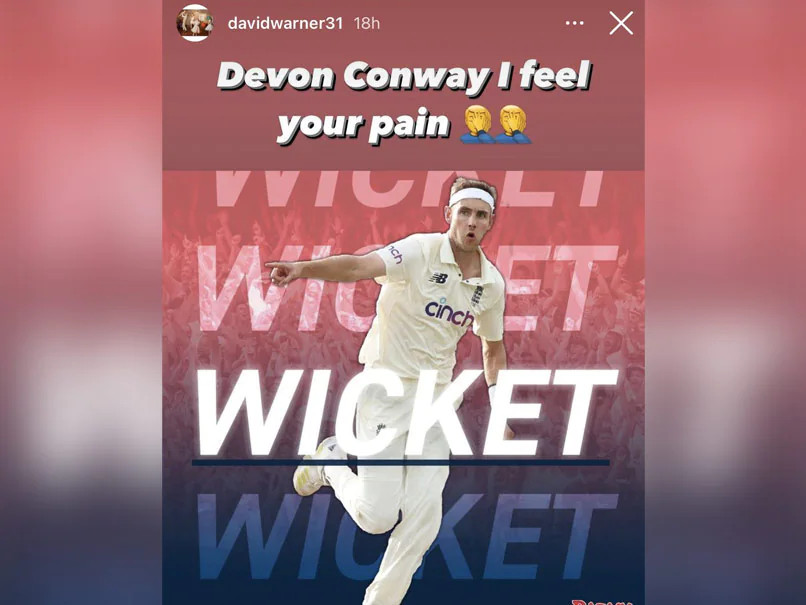 The Aussie southpaw is well known for his batting in Test cricket with 24 centuries and 34 half-centuries but Warner did struggle a bit while facing Broad over the years. So far, the 35-year-old English pacer has dismissed Warner 14 times. In the 2019 Ashes series played in England, Broad managed to send Warner back to the dressing room seven times.

Veteran English pacers Broad and Anderson were dropped from the West Indies Test squad and the decision backfired as the Joe Root-led team suffered a 1-0 defeat in the series. But now the deadly combination of Anderson and Broad is back again under the leadership of newly-appointed Test skipper Ben Stokes.

The Lord’s pitch seems to be helping pacers quite a bit. The visitors New Zealand also showcased a stellar bowling display as England finished the first day’s play at 116/7. Kiwi pacers Trent Boult, Tim Southee and Kyle Jamieson bagged two wickets each as Grandhomme claimed one wicket to put the English batting in deep trouble.