DC vs MI Highlights: Delhi Capitals notched up a six-wicket win over defending champions Mumbai Indians in a low-scoring IPL match in Chennai.

MI vs DC Live score: DC 133-4 in 19 overs: Not the way Bumrah would have wanted to end his spell, he bowled two no-balls and gave away 10 runs

IPL 2021 live score: DC 123-4 in 18 overs: It was quite an eventful last over by Trent Boult, he started off well with a pin point yorker which hit LAlit Yadav's pad but his LBW appeal was unsuccessful as the DRS showed that the ball pitched outside leg stump. Then Hetmyer hit him for a boundary in the fourth delivery. The NZ pacer gave away 7 runs in total in the 18th over

Live score MI vs DC: DC 116-4 in 17 overs: Jasprit Bumrah again providing with an important breajthrough for Mumbai, he gave away 9 runs but picked up the important wicket of Rishabh Pant. Now Delhi need 22 in last three overs

MI vs DC Live score: DC 115-4 in 16.5 overs: WICKET! Jasprit Bumrah picks up Rishabh Pant's wicket. Is this the way in for Mumbai?

IPL 2021 live score: DC 107-3 in 16 overs: Trent Boult was brought in for his third over, he started well as he bowled three dot balls, however, in the fourth ball Pant hit him for a boundary. Overall he he gave away 6 runs in this over.

Live score MI vs DC: DC 101-3 in 15 overs: Rahul Chahar strikes big in his last over, picks up the important wicket of Shikhar Dhawan. Dhawan had already hit him for 10 runs before he holed out.

IPL 2021 live score: DC 90-2 in 14 overs: End of a brilliant spell for Jayant Yadav, he gave away just 25 runs in his quota of over and picked up the important wicket of Prithvi Shaw. He is one of the reason why MI are still in this game.

Live score MI vs DC: DC 86-2 in 13 overs: Rahul Chahar bowled his third over and he gave away just 3 runs, while he has not picked up any wickets, he has definitely played his part in choking Delhi's run flow.

MI vs DC Live score: DC 83-2 in 12 overs: Jasprit Bumrah was brought back as Mumbai's search for Dhawan's wicket continue. Bumrah has looked off-colour tonight and he was hit for a four by Dhawan towards deep midwicket.

IPL 2021 live score: DC 76-2 in 11 overs: Delhi Capitals prmoted Lalit Yadav up the order and so far he has been pretty decent. Rahul Chahar bowled the 11th overf and he conceded 8 runs there. Dhawan welcomed him back with a boundary

Live score MI vs DC: DC 68-2 in 10 overs: A great change of bowling by Rohit Sharma, he introduced Kieron Pollard and the big man struck right in his first over as he removed Steve Smith. He gave away just 4 runs. It was quite an eventful over to be honest, right on the first ball, Pollard warned Dhawan of Mankading.

MI vs DC Live score: DC 64-2 in 9.2 overs: WICKET! Kieron Pollard strikes for Mumbai in his second delivery. Steve Smith is gone for 33.

IPL 2021 live score: DC 64-1 in 9 overs: A good over for Delhi Capitals for a change. They scored 12 runs in the 9th over thanks to two beautifully struck boundaries by Steve Smith.

MI vs DC Live score: DC 47-1 in 7 overs: Rahul Chahar, Mumbai's joint highest wicket-taker for the season so far was brought in by Rohit Sharma. Chahar almost struck in his first over, Shikhar Dhawan somehow survived as the inside edge went past leg stump.

IPL 2021 live score: DC 39-1 in 6 overs: Krunal Pandya is the next bowler introduced by Rohit Sharma and he conceded just 5 runs. A good spell of play for Mumbai.

Live score MI vs DC: DC 34-1 in 5 overs: Jasprit Bumrah was introduced by Rohit Sharma and the Indian quick bowled an economic over as he gave just 6 runs. 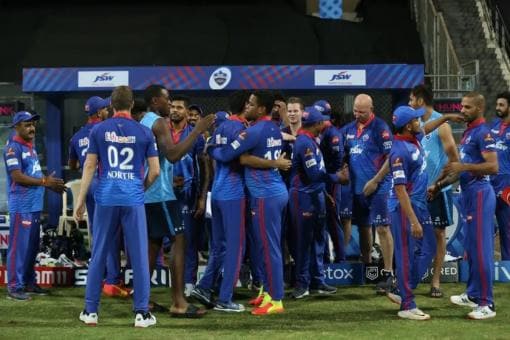 DC vs MI Highlights: Shikhar Dhawan played a patient match-winning innings as he helped Delhi Capitals to break their jinx against Mumbai Indians and beat them by 6 wickets.

A look at the head-to-head record shows MI have won 16 times but DC aren’t far behind with 12 wins. These two teams contested last year’s final when an all-conquering MI stormed to a record-extending fifth title. The fact that the two teams have made a similar start to the season adds another layer to the impending contest on Wednesday with either camp aiming to outwit other.

Rishabh Pant’s men started the season with a dominating with over CSK. They nearly made a match out of their next assignment against Rajasthan Royals despite posting a below-par target before being undone by Chris Morris. DC bounced back with an easy win over Punjab Kings as they sauntered to the target of 196 without breaking a sweat. What separates DC from MI is the latter’s consistency over a period of time. DC have shown glimpses of sustaining their form but will do well to learn from their opponents on how it’s done.

Their top-order has done fairly well with Shikhar Dhawan extending his form from the last season. Prithvi Shaw has also started well. However, their middle-order still looks a little vulnerable despite the presence of the likes of Ajinkya Rahane and Steven Smith in the squad. Captain Rishabh Pant’s presence does add some relief but they have to find someone who can make the No. spot his own.

On the bowling front, their pace duo of Avesh Khan and Chris Woakes has done an impressive job so far but Kagiso Rabada has proved to be expensive. They will hope the South African returns to his deadly best that got him the purple cap last year. They will be eager to bring in Anrich Nortje back who had set the 2020 season on fire with his extreme pace.

Rohit Sharma and Quinton de Kock have got the starts but not been able to convert. Suryakumar looks in good nick but middle order is a worry. They are yet to touch 160 this season and a major reason behind that is the pair of big-hitting allrounders Hardik Pandya and Kieron Pollard not hitting their strides so far. The fact that they have been able to win two of their three matches so far is due to the outstanding efforts of their bowlers, led by Rahul Chahar and Jasprit Bumrah. When their middle-order is in full flow, no score seems out of their reach.