“India has always been like a second home for me. The love and affection that I have got from the people of this country both during my professional career and even after my retirement, holds a special place in my heart. It saddens me deeply to see people suffering due to the ongoing pandemic. I feel privileged to be in a position of making a difference and with that in mind, I’d like to donate 1 BTC (Bitcoin) to Crypto Relief to help with the purchase of oxygen supplies for the hospitals across India,” Lee said in an official statement.

IPL Live Score DC vs RCB 2021: DC 126/4 (17)---After Pat Cummins, his compatriot Brett Lee has too donated in India’s fight against Covid-19. The country is reporting daily cases of three lakhs a day as it grapples with the second wave of the Coronavirus. Lee, who has a huge fan following in India, broke the news on Twitter.

IPL Live Score DC vs RCB 2021: DC 116/4 (16)--This was Mishra’s first warning. Earlier in the day, Delhi Capitals have won the toss and opted to bowl against RCB at the brand new Narendra Modi stadium in Ahmedabad.

DC vs RCB IPL 2021 live score: DC 81/3 (12)---Four from Stoinis and DC chase is coming back on track here. Delhi Capitals spinner Amit Mishra has been warned for applying saliva on the ball. Applying saliva used to be a common tactic among bowlers, spinners alike to bowl more effective but in post Covid-19 world it remains a major offense where someone can transmit the virus or can even contract it.

#RCB coach confirmed Scott Kuggeleijn will be joining with the team tomorrow. #IPL2021

DC vs RCB IPL 2021 live score: DC 47/2 (7)--WICKET! A nothing shot really. Prithvi Shaw has disappointed his fans, yet again. And with this DC lose three top order wickets. Will they be able to comeback from this?

DC vs RCB IPL 2021 live score: DC 33/2 (4). A brilliant shot from Prithvi Shaw comes up. Stranded in India after the Australian government on Tuesday suspended all direct flights from the country, Royal Challengers Bangalore duo Adam Zampa and Kane Richardson will fly out from Mumbai on April 28 just after midnight.

What an amazing delivery from Mohammed Siraj. Steve Smith just kissed that one and ABD took a simple catch behind the wicket.

IPL Live Score DC vs RCB 2021: DC 23/1 (2.1)--WICKET. Shikhar Dhawan was looking to go for the maximum but he couldn't clear the ground as Yuzvendra Chahal takes a simple catch. DC lose their opener.

Scott Kuggeleijn of New Zealand has been named as a replacement for RCB’s Kane Richardson. The Aussie cricketer flew back to his nation as the cases of Covid-19 kept mounting in India. Alongside him was Adam Zampa. No replacement has been named in yet for the spinner.  The Kiwi was part of Mumbai Indians’ bio-bubble but with players unwilling to commit, he makes his way to the RCB.

IPL 2021 DC vs RCB live score: RCB 139-5 in 18 overs: OUT! A wicket for Rabada finally, he picks up Washington Sundar's wicket.  Not a fruitful night for the South African, he had to wait till his last ball of the night to claim his first wicket. He gave away  38 runs 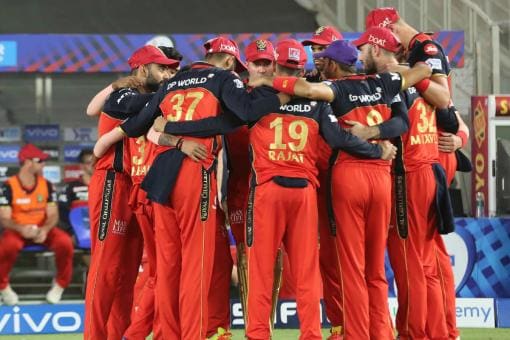 DC vs RCB IPL 2021 Live score, Delhi Capitals vs Royal Challengers Bangalore at Narendra Modi Stadium, Ahmedabad latest updates:  DC 170/4–And they fall short. What an over from Mohammed Siraj and DC fall short by two runs. “India has always been like a second home for me. The love and affection that I have got from the people of this country both during my professional career and even after my retirement, holds a special place in my heart. It saddens me deeply to see people suffering due to the ongoing pandemic. I feel privileged to be in a position of making a difference and with that in mind, I’d like to donate 1 BTC (Bitcoin) to Crypto Relief to help with the purchase of oxygen supplies for the hospitals across India,” Lee said in an official statement.

Royal Challengers Bangalore will clash with Delhi Capitals at the Narendra Modi Stadium in Ahmedabad on Tuesday, the 27th of April. Both the teams have had a fine start to the season and won 4 of their first five matches. The winner of the encounter will move to the top of the points table and thus neither of the teams will leave any stone unturned when they clash at Motera. RCB were thrashed by CSK in their last encounter while DC won a thriller against SRH in the Super Over.

Hit Hard by Foreign Pull-outs, Royals Seek to Loan Players from Other Teams

The RCB had a perfect start to the IPL winning four out of four and had things in control against CSK too until they confronted Ravindra Jadeja. He defeated them twice in the match – the first time in the last over of CSK innings hammering 37 off Harshal Patel and then in the middle overs with the ball picking three wickets in succession.

RCB would like to believe the loss to CSK was an aberration in what has otherwise been a fine start for them in 2021. Devdutt Padikkal seems to have found the aggressor in his batting and backed his hundred against the Royals with a quickfire 34 off 15 balls against the Super Kings. Washington Sundar was promoted to number three but did not get too many but Virat Kohli might persist with him at the position as he is wasted down the order.

AB de Villiers and Glenn Maxwell will continue to be the playmakers for the team in the middle order.

The bowling received a tonking against CSK. Harshal Patel, who has been outstanding in the tournament, bowled one bad over and it went very bad for him! Mohammed Siraj has been the pick of the RCB bowlers with an economy rate of 6.47. Kyle Jamieson started off well but has been taken for a few and has an economy rate of above 9 in the competition. Yuzvendra Chahal needs to do a bit more with the ball in the middle overs. He has just picked three wickets in five matches and not been too restrictive either.

The withdrawal of Adam Zampa and Kane Richardson is a blow to the Challengers but should not worry them too much as both the leg spinner and the all-rounder are not an automatic selection in the first XI for the franchise.

The top four are firing for the Capitals but they need more contributions from the lower order. Prithvi Shaw was in splendid touch against CSK with 53 off 39 deliveries. Steven Smith got some runs but needs to push on the accelerator earlier in the innings. Shimron Hetmyer and Marcus Stoinis need to provide the flourish at the death. Shikhar Dhawan has been the batsman of the season with 259 runs in 5 innings at a strike rate of 142.3 with two fifties.

The bowling will be depleted without the services of R Ashwin who has pulled out of the tournament, at least for the time being, to help his family deal with the Covid-19 pandemic. But the Capitals have enough resources to replace the champion off spinner. Axar Patel made a brilliant comeback in the match against SRH and would now play an even more significant role in the middle overs. Amit Mishra has been impressive with his leg spin.

Avesh Khan has been the pick of the DC fast bowlers so far in the season. He has picked 11 wickets in 5 matches at a strike rate of 9.8 and economy rate of 7.61. Kagiso Rabada has not found his rhythm yet in the competition and has only bagged 4 wickets in as many matches while also conceding a few.

RCB are expected to go with the same XI which lost to CSK.

DC will be forced to make a change with R Ashwin’s exit from the tournament. They may replace him with an experienced Indian seamer like Umesh Yadav. Hetymer may also be left out for Chris Woakes.

DC has dominated the recent rivalry having beaten RCB in both the matches in IPL 2020 and IPL 2019.

Steven Smith has had a relatively quiet IPL so far. He got some runs against SRH and would be looking to replicate what he did for the Royals at the start of the season in IPL 2020 in the UAE.

RCB: Jadeja’s ability has been there for everyone to see. I am very happy to see him perform with the bat, ball and on the field. After two months, he will be back playing for India and it is always a pleasure to see your premier all-rounder do well with the bat: RCB captain Virat Kohli in praise of the brilliant all-round show by Ravindra Jadeja against his own team.

DC: I am just doing all those stuff I have worked with. It’s helping me right now, so I think I should continue that: Player of the Match for the Delhi Capitals, Prithvi Shaw after his impressive performance against the Sunrisers.