Five Test matches, five lost tosses. While Virat Kohli’s form with the bat during the series was remarkable, his form at the toss was particularly wretched. In fact, even in South Africa at the start of the year, Kohli lost two of the three tosses in the Test series.

Five Test matches, five lost tosses. While Virat Kohli’s form with the bat during the series was remarkable, his form at the toss was particularly wretched.

So, did India’s poor luck with the coin spin contribute in any way to the outcome of the series? Playing catch up is never easy and India have found themselves chasing a fourth innings target in five of their eight away Test matches this year. Let’s dig deeper though. Was the toss such a contributing factor in India losing six of eight Tests away from home this year? Despite being on the wrong side of the coin, did they perform better than an average team would in each innings? To analyse these factors, we look at each of India’s overseas Tests (starting from the fifth Test against England) and zero in on the factors that contributed to the outcome. Teams batting first at The Oval have won 35 Tests compared to the 28 by teams bowling first. Known for being on the slower side, The Oval is a venue where you bat first and England expectedly chose to do the same after winning their fifth straight toss in the series.

The toss hadn’t been much of a factor in the previous five Tests at this venue with a balanced record favouring neither teams but historical records show a 34:29 ratio favouring the team winning the toss.

India bowled England out for less than the global average score in the last five Tests at the venue in the first innings but conceded 200 more than the average score in the second. They themselves fared much better than the average fourth-innings score courtesy a KL Rahul- Rishabh Pant record stand but having conceded a mountain of runs in their second essay, India stood virtually no chance to either win or save the Test.

Deciding factor in loss: A poor third innings with the ball. A recent Test venue, only two five-day matches had been played at the ground before the fourth Test of this series. Teams batting first have scored heavily here in these two Tests but that was not to be for England after an inspiring bowling performance from India. Dismissed for significantly less than the average score in the first innings, England then did the same to India.

The third innings was as such decisive but India allowed the hosts to score a few runs above the par score. Left to chase a record fourth-innings score (for India), the visitors fell for 184, which is slightly better than the average score in the fourth essay at the ground.

Deciding factor in loss: While India conceded a tad too many in the third innings, it wasn’t the sole deciding factor. They bowled exceptionally well, despite losing the toss, to reduce England to an average first-innings score and take the first innings lead. With the pitch getting better for batting, India ideally should have chased down the target although it was significantly higher than the average fourth innings score at the ground. Teams winning the toss have won three out of the last five games at the venue. India were put in to bat under difficult conditions at Trent Bridge and outdid expectations with their first 300-plus score in the series. Having done much better than the par first-innings score at the ground, the visitors then went on to bowl England out for 161, way less than the average second-innings total. Interestingly, Trent Bridge favours teams batting second and it is notable that India overcame this hurdle to take a huge first innings lead.

They went on to rack up more runs and set a humongous target for the hosts, who scored way more than the average fourth-innings score at the venue, but still fell short.

Deciding factor in win: A supreme batting display in either innings fought the odds of losing the toss. The huge lead in the first essay courtesy a near-perfect bowling performance also helped India. The slope at Lord’s is known to trouble visiting teams and with overhead conditions and the pitch favouring the team winning the toss, India stood little chance against a bowling attack known to make the most of such conditions. Toss results in the recent past have been balanced at Lord’s but the conditions were vastly different this time around and hence this was a big toss to lose.

India made 107 and 130, way less than the average first and third innings score at Lord’s and allowed England to score heavily. Having conceded a mammoth lead in the first innings, the odds were stacked heavily against the visitors.

Deciding factor in loss: The toss played a huge role in this defeat although India’s batting and bowling performance in the first innings wasn’t up to the mark. They might have lost this Test either way, but it would be fair to say England were favourites to win the moment they won the toss. Although India came within touching distance of a win at Edgbaston in the first Test of the series, much of that was due to a tireless effort from their skipper with the bat and some sharp bowling by the pacers. Losing the toss was made to look less significant as India bowled out the hosts for 287, lesser than the average first-innings score in recent times.

India’s batting, sans Virat Kohli, then went on to disappoint although they nearly matched England’s score to level things. With the game in the balance, India bowled England out for 180 in another remarkable performance setting themselves a very gettable target of less than 200. Although average fourth innings totals at the ground have been lesser than the target, considering it was a far better pitch, should ideally have helped India chase this score. Instead, they managed to just match the par fourth-innings score and fell 31 short of a win.

Deciding factor in loss: A poor fourth innings. Would the toss have made a difference? The manner in which India’s bowlers performed ensured that the toss wasn’t much of a factor. A fair verdict would be that their batting let the visitors down. 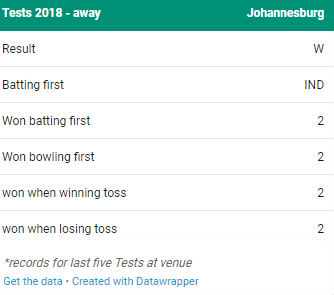 ‘The Bullring’ is traditionally known for its intimidating nature and visitors have long struggled to grab any kind of stranglehold at the venue. With the pitch further spiced up to welcome India, the odds were heavily stacked against the visitors. That India won the toss was perhaps quite significant to the final result.

They scored less than the average first innings score in recent times at Johannesburg but it was expected on a wicket that assisted the fast bowlers even more than usual. The hosts gained a slender seven-run lead in the first innings with the Indian bowlers nearly matching the Proteas wicket for wicket. India then went on to stage a remarkable fight with the bat on a deteriorating wicket. The decisive third innings meant the target proved rather steep for South Africa who succumbed in the face of a disciplined Indian performance with the ball.

Decisive factor in win: Toss was a major contributing factor in India’s win as was a pleasing performance with the bat in the third innings. A memorable win despite the pitch issues. Teams batting first have each of the last five Tests at the venue and having lost the toss, India were forced to bowl at South Africa, who scored 335, still lower than the average first-innings score at the venue. With the pitch fairly advantageous for batting, India’s bowlers deserve credit for keeping the hosts on a leash.

With the bat, India exceeded the average second innings total at the venue but then went on to concede a touch more than they would have liked in the third innings.

With a much higher than par fourth-innings target to gun down, India had everything going against them. They nearly matched the average fourth innings total at the venue but still fell well short of the eventual target. Cape Town presented India with their first stiff challenge after a rather long home season. India were perhaps helped by the fact that South Africa chose to bat after winning the toss under overcast conditions. Despite being known as a batting venue, this particular Cape Town wicket, tailor-made to torpedo the visitors, was a haven for fast bowlers.

With that in mind, India perhaps gave away a little too many in the first innings (this despite the South Africa score being significantly lower than the average first innings total) after they had the hosts at 12/3.

India performed poorly with the bat the first time around, in the process gifting a decisive lead to the hosts. An inspired bowling performance in the third innings of the Test levelled things and despite the target being on a gettable scale, India fell short by a prominent margin. Their eventual fourth innings score was lesser than the average at the venue.

Decisive factor in loss: Poor batting performance, particularly in the first innings. The toss had little impact on the result. If anything, it favoured the Indians.

The toss was a major factor in just one of the eight games - at Lord’s. That said, India did extremely well to fight from behind and come close to winning a lot of these Tests. Results might have swayed India’s way had they batted first more often and a 2-6 win-loss record in away Tests in 2018 isn’t perhaps a fair reflection on how this Indian side has performed.