STUMPS DAY 3: And finally after a full day of rain the play has been called off. Hopefully we will get a full day's play tomorrow.

The umpires are out there in the middle for an inspection. Hopefully we can get in some overs here.

As per the latest update, the rain has stopped for now. The cut off time for the day to end is 10.30pm. If the groundmen can get the ground ready in time, we might have some play.

Latest from Lord's: It still hasn't stopped drizzling and we are almost heading to Tea. Remmber we are just 15 minutes away from the scheduled Tea and if the game doesn't resume after Tea, we are afraid that Day 3 might be called off. What impact would it have on the game?

“Rohit Sharma is a man finally in control of himself, his thoughts, what he wants to achieve and where he wants to head from here. Rohit always had the game and the talent to be successful even in Test cricket. What has happened lately though is he has sorted out his game-plan in this format. Look at the way he began approaching his Red ball cricket, since he has turned an opener, from 2020 onwards,” Rathour told TOI.

It's still raining at Lord's. But here's what India's batting coach has to say about Rohit Sharma:

Rohit Sharma’s meteoric rise in Test cricket comes as no surprise. The Mumbaikar had proven himself in the limited-overs formats, which helped him fare better in his second innings in the Tests. Batting coach Vikram Rathour is of the opinion that Rohit always had the game to excel in the longest format, but now he has a much better game-plan.

There is hardly any doubt about India skipper Virat Kohli’s dominance in the world of cricket. Even though he has stiff competition in different formats from different players, but it is hard to find a batsman like Kohli who adapts to the situation as well as he does, across formats. Batting coach Vikram Rathour feels that Kohli is without any doubt best in the world, and also lists the reason for believing so.

It's been raining at Lord's for the last one hour and the persistent rains made sure no play was possible. Bad news from Lord's. Apparently it's still raining there and it has been since 11 AM. It will be three hours straight! Players had taken the Lunch break and it felt that the play might resume, but we are afraid...it doesn't look so.

India batting coach Vikram Rathiour has given an exclusive interview to TOI and he has prasied Rahane's knock at MCG which came in the aftermath of India's Act 36---India's lowest-ever Test score.

“Yes, and it was a big thing. After the first Test match, many of the experts had written us off. Virat was leaving. Ajinkya was taking over as captain for the next Test. The responsibility was multi-fold. That Test match showed how good a player Ajinkya is.”

The groundstaff is in the middle. They are trying to soak the wet pitch with all their equipments but it's still raining.

Here's Hanuma Vihari on his 23-ball duck in England when he toured this country in 2018:

“I thought it was full enough for me to drive, but again, in England you have to be really certain with your shot selection. In India, you can get away with a push, or even if it is not there to drive, you can still get away driving on the up. If I were to play that ball a second time, I would try to play as late possible.”

And the news from the Lord's---as expected, the play has now been delayed officially. Well, there was never any doubt about it. It never stopped drizzling, will it get worse?

The start of day three has been delayed due to rain ☔

England debutant Ollie Robinson is reportedly facing the axe from the second Test against New Zealand no matter how he performs at Lord’s. This seems to be a direct consequence of his controversial tweets from 2012 that resurfaced and went viral on Wednesday as he made his Test debut.

Robinson, 27, has since apologised for his ‘racist’ and ‘sexist’ tweets.

“On the biggest day of my career so far, I am embarrassed by the racist and sexist tweets that I posted over eight years ago, which have today become public,” Robinson said in a statement. “I want to make it clear that I’m not racist and I’m not sexist.”

Meanwhile things are heating up as far as Robinson is concerned. Here's our latest report:

England debutant Ollie Robinson is reportedly facing the axe from the second Test against New Zealand no matter how he performs at Lord’s. This seems to be a direct consequence of his controversial tweets from 2012 that resurfaced and went viral on Wednesday as he made his Test debut.

Robinson, 27, has since apologised for his ‘racist’ and ‘sexist’ tweets.

“On the biggest day of my career so far, I am embarrassed by the racist and sexist tweets that I posted over eight years ago, which have today become public,” Robinson said in a statement. “I want to make it clear that I’m not racist and I’m not sexist.”

Still keeping everything crossed for a change in fortune here at Lord's with 30 mins to go🤞#ENGvNZ pic.twitter.com/D2zULwfzkY

Rain update: It's wet...and some of the London-based journalists are claiming that the game might not start before 3 PM London time! That's a bad bad sign. Will we even get some action? Day 3s are like a climax to the longer-form of the game, if there is no day 3..there's no fun.

Update 1006 local (0906 GMT) - Not the greatest of news to start off with as it is currently raining in London and the covers are on. It looks like we will have a delayed start to Day 3. Nothing has been confirmed yet. Let's hope that the rain clears soon and we get play as soon as possible. Stay tuned for further updates.

Hello and a warm welcome to Day 3 of the Test between England and New Zealand. Dare I say that the team which does better on this day will have a lot of advantage in the game. The game is nicely poised with Root and Burns still batting well for England, the plan for them is to bat as long as possible to get close to the New Zealand total. For New Zealand, it will be crucial to break this stand and then pick quick wickets to bundle out the hosts. Who will this day belong to? We will find out. Stay tuned for more updates. 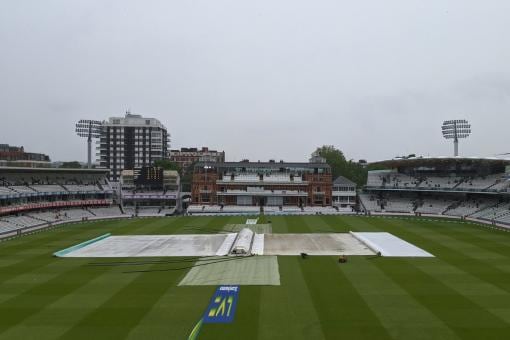 ENG vs NZ Live Score, 1st Test, Day 3 Today’s Match:  Finally the rain has stopped for now. The cut off time is 10.30 pm IST, and if the groundsmen can get the ground ready, we might have some play.

New Zealand’s pacers appeared to carry forward the momentum and reduced England to 25 for 2 by tea. Tall paceman Kyle Jamieson had Dom Sibley lbw for a duck with a ball that straightened to hit the opener on the back pad, the decision upheld on ‘umpire’s call’ after a review.

But there was no room for doubt when Zak Crawley was caught behind off Tim Southee for two. Crawley drove away from the body and paid the price. It left England in trouble but Burns and Root steadied the ship.

The partnership was worth 93 when stumps were drawn. Burns went past his half-century while Root approached his. Both fought off accurate bowling – even a short ball attack from Neil Wagner – but did not go into their shells.

The day, though, belonged to Conway.

Conway was only the seventh batsman to make a double hundred on Test debut.

He faced 347 balls, with 22 fours and went to 200 in style when he hooked fast bowler Mark Wood for the only six of his innings.

New Zealand No 11 Neil Wagner, also born in South Africa, made 25 not out off 21 balls that included a superb straight six off Stuart Broad during an entertaining last-wicket stand of 40.

New Zealand resumed on 246-3, with Conway 136 not out after Black Caps skipper Kane Williamson had won the toss.

It was a welcome moment for Robinson, who found himself having to apologise after play on Wednesday when racist and sexist tweets he had first posted as a teenager were published again.

Wood then removed BJ Watling for just one, with the aid of a sharp slip catch by Sibley.

Fellow seamer Robinson, who took two wickets on Wednesday, then had Colin de Grandhomme lbw for nought on review, with Mitchell Santner also out for a duck when he chipped Wood to mid-off.

Robinson, however, was deprived of a place on the Lord’s honours board when Broad dropped Southee at mid-off to deny him a fifth wicket.