England vs Australia, 3rd ODI at Old Trafford, Highlights: As it Happened

Four! Starc gets down on one knee and sweeps Rashid off to square leg for the winning runs with 2 balls to spare. Australia win the match by 3 wickets and the series 2-1.

SIX! Mitchell Starc takes matters into his own hands against Rashid. He's smacked him straight back over his head for a six. Nailed it!

OUT! Mark Wood with a brilliant catch at third man to dismiss Alex Carey as he looked to carve it away for runs. Carey gone for 106 and Archer has his man finally! Australia need 10 off 6.

OUT! Mark Wood with a brilliant catch at third man to dismiss Alex Carey as he looked to carve it away for runs. Carey gone for 106 and Archer has his man finally! Australia need 10 off 6.

Seven runs from the Adil Rashid over with Pat Cummins and Alex Carey in the middle. Cummins will be on strike with Australia needing 14 from 12.

OUT! Maxwell was teeing up from the word go and it has not worked out. Top edges it to Tom Curran at short third. Maxwell gone for 108 after a wonderful innings. Australia need 18 more.

11 runs once again from that Woakes over as he bowls out. Australia are 282/5 with 3 overs to go. Rashid's warming up at short-fine leg. 21 needed.

100! Carey tucks it away to mid wicket in typical Carey fashion after the massive hit and brings up his maiden century. Fantastic batting from him too.

SIX! Woakes with pace and Carey has lifted him over deep square leg. It's also brought up the 200-run partnership.

11 runs of the Tom Curran over with Maxwell reaching his 100 with a huge six. One expects him to go through the gears now as Carey inches towards a ton too.

Six and 100! Maxwell is doing Maxwell things here in Old Trafford. Length delivery from Curran has disappeared over cow corner and that takes him to his second ODI ton. Absolutely brilliant innings from Maxwell. 7 sixes and 4 fours.

Woakes back into the attack now and he starts off by conceding three singles which isn't something that will bother England. Australia pick up five more from the final three deliveries with Maxwell getting a couple of the final ball. Australia 260/5 after 45.

Plenty of discussions between Morgan and Tom Curran. Maxwell however gets across to a really wide one and scoops it over Morgan for a boundary along side three singles for the duo in the over. Australia 252/5 after 44.

Mark Wood completes his 9th over and it is another 9 run over for Australia after Maxwell pulled him away fine down to fine leg for a boundary to start things off. Australia are 245/5 after 43 overs.

Good over for Australia as Carey gets over a short one and slaps it away for a boundary of Jofra Archer. 9 runs from the over and Australia are 236/5 after 42 overs.

Maxwell pushes a short one from Wood away to mid wicket for a couple to end the over.Five from it and Australia are 227/5 after 41. They need 76 more and Maxwell's looking to go big at every chance he can.

Carey uses the pace from Jofra Archer well to find the fence at third man. Six runs of the over takes Australia to 222/5 after 40 overs.

Both Australia and England at the end of the the 39th over were 216/5. It's neck and neck and a fantastic way to finish the English summer.

A couple of wides from Wood who isn't easy to get away. Maxwell and Carey manage four along side and need 87 runs from 11 overs.

Maxwell's attempting a few elaborate hits but when it's in the arc he's ensuring it lands up in the stands. Rashid allows him to swing at a full one and Maxwell smacks it flat through midwicket and thank god for no crowds as it was hit like a bullet. 9 runs of the over. Australia are 210/5.

Maxwell and Carey aren't able to get the pacy Wood away that easily but are allowed to rotate the strike. Five runs takes Australia to 201/5.

10 runs from the over of Adil Rashid. Maxwell was teeing up again! Expect a good battle in the next over too. Meanwhile Carey finished the over with a signal. Australia are 196/5 after 36 overs.

Monster hit from Maxwell. Quite an effort to get it back.

Five sixes now from the allrounder.

SIX! Maxwell's taken on Rashid and it's a monster hit. Absolute monster of hit and into the galleries. That will take some fetching.

Woakes responds well for England after that with an over of just two singles. England and Australia both taking it down to the wire.

12 runs from the Rashid over for Australia. Maxwell and Carey have put on 111 and need 119 from 95 deliveries from here on in.

Six and Fifty! Huge hit from Maxwell and some way to get to your half century. Slog sweeps Rashid through midwicket and sends it a distance. Maxwell admires it as England go fetch the ball.

Four singles from Woakes' next over for Australia. Maxwell is nearing a half century after completing 3000 runs in the format in internationals. Australia 172/5.

Five runs of another good Rashid over and Maxwell's elaborate attempt to reverse sweep leaves him flat on  the ground and tensed about a lbw review. He survives and Australia are 168/5 after 32 overs and need 135 runs more to win.

Four and Fifty! Woakes comes back into the attack and Carey stands up tall to welcome him with a crack pull shot that fetches him four runs and his fifty! Archer will be regretting his no-ball earlier. 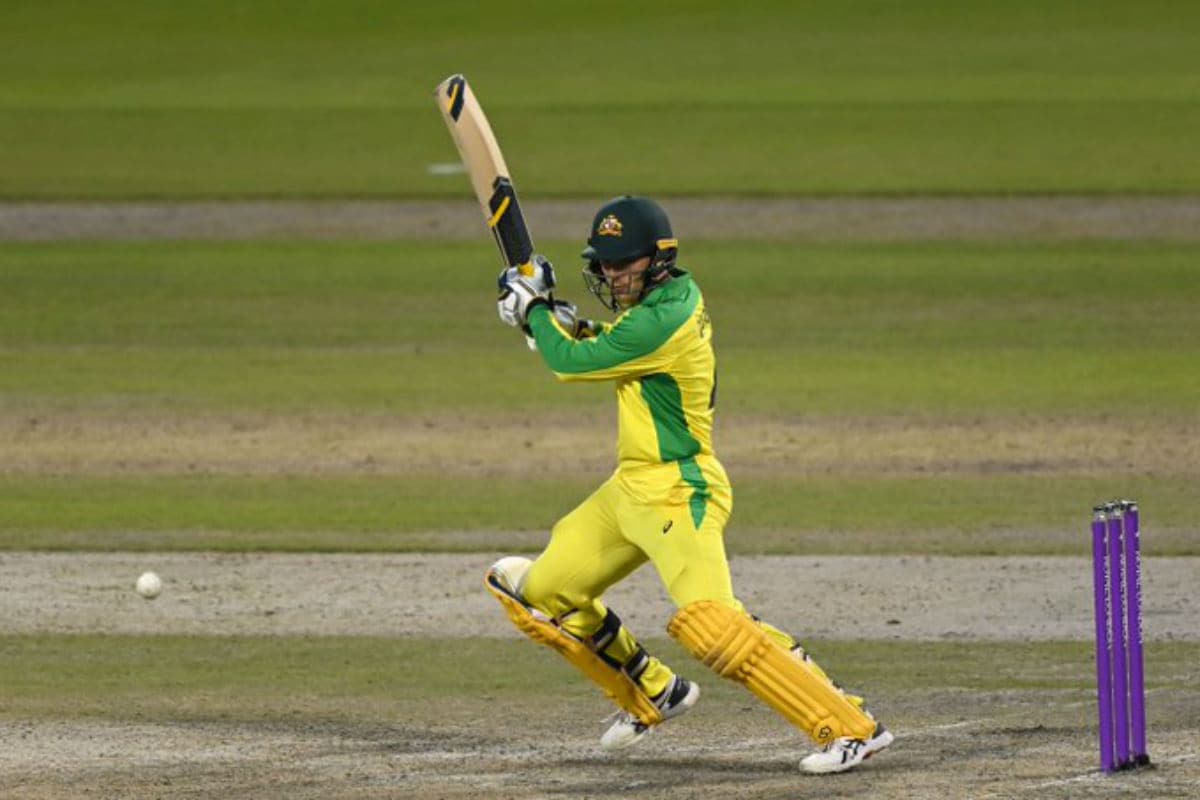 England vs Australia, 3rd ODI Live Score, Old Trafford, Manchester, Latest Updates: Woakes back into the attack now and he starts off by conceding three singles which isn't something that will bother England. Australia pick up five more from the final three deliveries with Maxwell getting a couple of the final ball. Australia 260/5 after 45.

Second ODI Report: Australia collapsed from a position of victory in a moderate chase as England leveled the series with a 24-run victory in Manchester in the second One-Day International.

Australia were chasing 232 and were cruising at 144 for 2 before Jofra Archer and Chris Woakes, and then Sam Curran, created mayhem in the middle overs. From there, Australia slipped to 147 for 6 and eventually 207 all out. Archer, Woakes and Sam Curran got three wickets each.

Australia's chase started on the wrong note courtesy a terrific spell by Archer. The pacer got David Warner yet again, the opener nicking to the keeper for just 6 in the fourth over.

Soon, Marcus Stoinis was undone by a snorter of a short ball from Archer in the eighth over, the well directed bouncer lobbing straight off the bat to the keeper. Australia were 37 for 2 and England were right in the game.

However, Aaron Finch and Marnus Labuschagne steadied the ship with a sturdy partnership. Finch got past his fifty, and the partnership reached 107 but the game change rapidly in a space of four overs.

Labuschagne fell to Chris Woakes, lbw two runs short of his half-century with Australia 144 for 3. In the very next over, Archer bowled Mitchell Marsh, after which Woakes got the big wicket of Finch, bowled for 73, to leave Australia 145 for 5. That became 147 for 6 when Glenn Maxwell missed a straight one from Woakes.

Pat Cummins attacked with a six off Adil Rashid but Sam Curran struck twice in two balls to dent Australia further, dismissing Cummins and Starc to leave Australia 166 for 8.

Australia need 60 off 48, and then 37 from 18, with Alex Carey fighting at one end, but the task was too stiff without support from the other end.

Earlier, Adam Zampa proved a thorn in England's side again as Australia restricted the world champions to 231-9.

The leg-spinner took 3-36 from a maximum 10 overs to follow his 4-55 during Australia's 19-run win in Friday's first of a three-match series.

England captain Eoin Morgan top-scored with 42 but could not prevent his side slumping to 149-8 in the 41st over.

But a ninth-wicket partnership of 76 between the recalled Tom Curran (37) and Adil Rashid (35 not out) kept England in the game.

Left-arm fast bowler Mitchell Starc enjoyed an early strike when he had Jonny Bairstow caught behind for a duck.

Jason Roy hit three fours in an over off fast bowler Josh Hazlewood -- an off-drive, a whip shot through square leg and a square-cut.

But his promising 21 ended when he was run out by Marcus Stoinis' direct hit from cover as Test captain Joe Root, struggling for runs, set off for a risky single.

A change of bat saw Root hit two fours off Cummins and his pulled six off Stoinis brought up a fifty partnership with Morgan.

Zampa, however, struck third ball when Root edged a well-flighted delivery to Australia captain Aaron Finch at slip to end an innings of 39 off 73 balls.

His move was vindicated when Cummins had Buttler lbw for just three.

Zampa had Morgan lbw on review to end a relatively fluent 52-ball innings and then had Sam Billings, fresh from his maiden ODI hundred on Friday, chopping on for just eight.