Blood, Sweat & Tears - Behrendorff Fights it All to Shine at Lord's

For a bowler who was a prodigy of sorts, earning a state opportunity before his old junior teammate Lyon, this has been the pattern. To give himself every chance of earning white ball caps, he had shelved red ball fare in 2018. Nine months later, here he was, winning a World Cup game.

London: When Justin Langer grumbled and grizzled after Australia lost to India, insisting flexibility was their strong suit, the response was a cynical one. Flexible or just unsure? Adaptable or chasing their tail? To what extent were they relying on far too few?

This went for the ball as well as bat: unbalanced in the absence of all-rounder Marcus Stoinis, chopping and changing in an effort to find the right duo to partner Mitchell Starc and Pat Cummins.

At Lord’s on Tuesday, they opted for a couple of Canberra boys. The selection of one, Nathan Lyon, felt inevitable at some stage. You don’t bring a spinner of his quality into a tournament like this and not turn to him eventually. Especially on the big stage of Lord’s against England. But what about the lad he captained as a teenager in national under 19 carnivals when both were playing for the Australian Capital Territory? That was less clear.

Maybe it was the famous slope, maybe it was the sweaty overhead conditions. But it was the left-armer who got his opportunity, leapfrogging Nathan Coulter-Nile and beating out Kane Richardson – the two picked ahead of him so far in this competition. He played against Sri Lanka, his only World Cup outing, and took some tap at first change. After that, the view was he would remain primarily Starc’s understudy and not much more.

But data said otherwise and Australia paid attention. The boffins at ESPNCricinfo, for instance, saw Behrendorff as the correct option on the basis of England’s poor record against left-armers. James Vince stood out as one of those with a numerical vulnerability and it was Vince who would be walking out to open for England. Oh, how it worked. 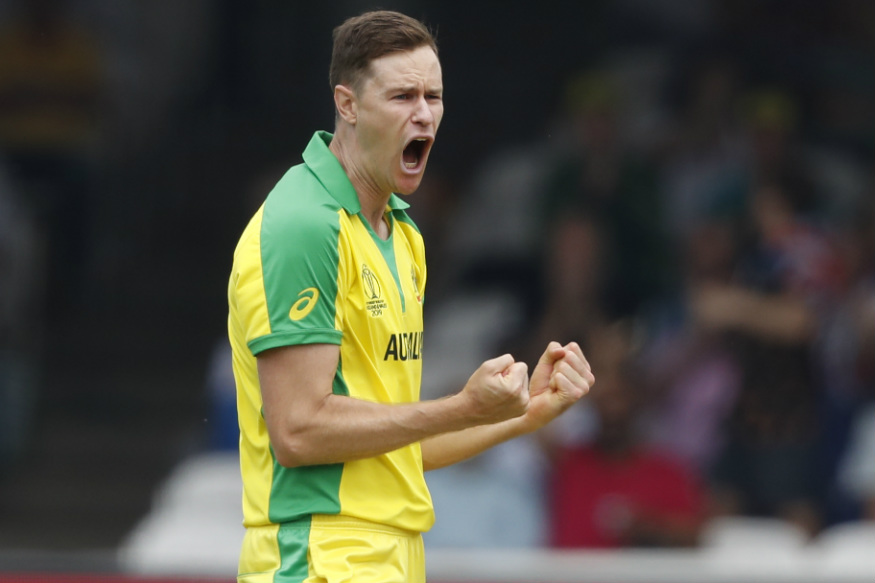 The inswinging delivery that bent back his middle stump second ball of their pursuit of 286 was the stuff dreams are made of for southpaws coming over the wicket to right-handers. According to Cricviz, only two deliveries in the tournament had a greater chance of dismissing an opener.

Having watched England beat the bat an awful lot on a receptive surface with their two new balls, albeit from deliveries not threatening the woodwork, the Australians went the other way and Behrendorff was the perfect asset. “It was huge,” he said of Finch’s vote of faith. “That’s where one of my primary strengths lies, bowling up front, swinging with the new ball. So it was great to be given that opportunity.” As for how he approached the opening spell, the additional swing achieved was in keeping with the plan to bowl fuller - twice as full as England in the opening ten overs.

“That’s something we were assessing as they were bowling,” the 29-year-old continued. “They didn’t hit the stumps, or the balls were going to hit the stumps too often, so we made a conscious effort to try to pitch up and we hit the stumps as much as we could early doors.” Starc did the same to blow Joe Root’s front pad off, before changing it up to bounce out Eoin Morgan. By shuffling Cummins to first change, Australia’s elasticity was tested and proven. England’s score of 39 for three at the end of ten overs was their fourth lowest in four years.

What made this all the more satisfying for the lanky quick is that his dream was so close to vanishing over the last four years. In his ODI debut in January he also struck in the first over, another delightful swinging delivery that sorted out Shikhar Dhawan, but one game later he was back in the sick bay with concerns about his back that had been subject to stress fractures over and over since he was on the cusp of international cricket in early 2015. For a bowler who was a prodigy of sorts, earning a state opportunity before his old junior teammate Lyon, this has been the pattern. To give himself every chance of earning white ball caps, he had shelved red ball fare in 2018. Nine months later, here he was, winning a World Cup game.

“Some days, especially during all the rehab periods, you think, am I going to get back; am I going to be able to get out there and play for my country?” he acknowledged after haul of 5/44 that will see his name on the HQ honours board at the first time of asking.

Behrendorff’s subsequent four wickets came in a relative hurry. Swung around to follow Cummins down the slope from the pavilion end, he forced an error out of Jonny Bairstow within five deliveries of his introduction. Coming back after Starc had done his Waqar Younis impression – a devastating reverse-swinging that castled Ben Stokes – he was back on again with a wicket two balls into his third spell - two! That’s not a bad party trick. By the time the pair were done, they had nine of the ten England wickets between them.

“Ever since the squad was announced, you wake up and pinch yourself and think ‘is this happening? Am I going to the World Cup?’," Behrendorff said before taking off for England. Now, he’s not just at the World Cup, he’s very much in the middle of it. This all might have been a long time coming, but the moment he has picked to explode couldn’t be better.