James Anderson became the first pacer in cricket history to reach the milestone of 600 Test wickets when he saw the back of Azhar Ali on Day 5 of the third and final Test against Pakistan in Southampton. James Anderson became the first pacer in the history of the game to reach the milestone of 600 Test wickets when he saw the back of Azhar Ali on Day 5 of the third and final Test against Pakistan in Southampton.

Overall, he joins the three legendary spinners – Muttiah Muralitharan, Shane Warne and Anil Kumble in the 600-Plus Club.

Interestingly, Anderson is the second-quickest in terms of number of balls bowled to reach the milestone. Anderson picked his 600th wicket with his 33,717th delivery, 6 deliveries slower than Muttiah Muralitharan. We look at some numbers which have defined Anderson’s Test career:

Shane Warne was the first bowler to reach the landmark when he had Marcus Trescothick caught behind by Adam Gilchrist in the third Ashes Test in Manchester in 2005. 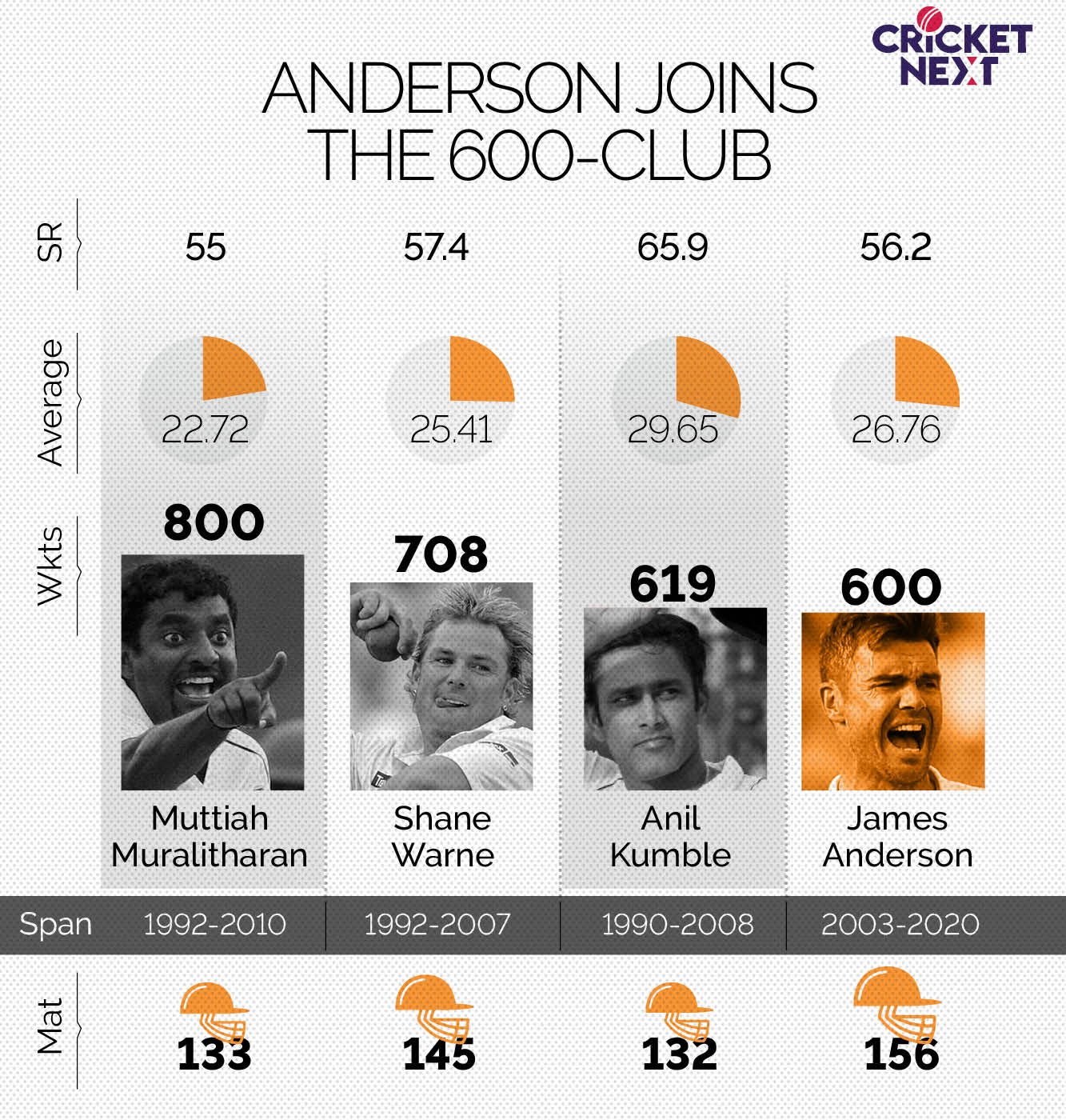 17 Years and 91 Days: Time taken by Anderson to reach the Milestone of 600 wickets

Anderson reached the milestone in his 156th Test. 29: Number of 5 wicket hauls in an innings

Anderson picked his 29th fifer in the first innings of the ongoing Test against Pakistan in Southampton.

Prior to the start of the ongoing Southampton Test, Anderson had picked 28 five-wicket hauls in an innings in his Test career and 19 of these came in winning matches – the maximum in victorious matches for England.

67.5% of Anderson’s dismissals lie in the range of 0-19 runs implying that two of every three wickets he has taken in his career have been early breakthroughs with the new ball.

It is the 4th best amongst the 13 fast bowlers from England who have taken a minimum of 200 Test wickets.

It is also better than the likes of Craig McDermott, Tim Southee, Trent Boult, Makhaya Ntini, Brett Lee amongst others.

No fast bowler picked more wickets than Anderson’s 225 in the five year period from 2014 to 2018. Anderson’s Bowling Average of 21.49 is the best amongst the 22 bowlers (including spinners) who picked a minimum of 100 wickets in this period.

Some of England’s big wins at home during this period included the 2014 and 2018 victories against India, Ashes in 2015 and against South Africa in 2017.

Some of their biggest Away wins included the 2015-16 series victory in South Africa and the 2018 win in Sri Lanka. 245: Number of Wickets against Sub-Continent Teams

Anderson has a stupendous record against India, Pakistan, Sri Lanka and Bangladesh. He is the leading wicket-taker (amongst pace bowlers) against these 4 sub-continent teams with 245 wickets from 60 Tests at an average of 23.42 and strike rate of 52.5.

Anderson bagged 25 wickets in 5 Tests against India in the home series in 2014.

384: Number of Wickets at Home

No fast bowler has picked more wickets at home than Anderson.

Anderson has picked 384 wickets in England in 89 Tests at an average of 23.8 and strike rate of 50.1. 22 of his 29 fifers and all his 3 ten-wicket hauls have come in conducive home conditions where he has mastered the art of swing and seam bowling.

Anderson’s Average and Strike Rate Product in England is better than the likes of Bedser, Walsh, Hadlee, Gough and Wasim Akram amongst others (in England).

Anderson also picked 7-43 against New Zealand in Nottingham in 2008.

Trent Bridge has been Anderson’s favourite hunting ground. He has picked 64 wickets at the venue in just 10 Tests at 19.62 apiece and a strike rate of 42.5.

He has 7 fifers and 2 of his 3 ten-wicket hauls (in a match) have come at Nottingham. He was the leading wicket-taker in the 2010-11 Ashes in Australia playing a pivotal role in England’s 3-1 series victory. It was England’s first series win Down Under since 1986. And remains the only Away Ashes victory in 34 years!

He also played a significant role in the 2013 Ashes win at home.