England vs West Indies 2020, 1st Test at Manchester, Day 4, Highlights: As it Happened

England vs Pakistan 2020 Live Score, 1st Test at Manchester, Eng vs Pak Live Updates: TEA, DAY 4: England 167 for 5, need 110 more runs. England still in the game thanks to Buttler and Woakes. Pakistan hold the edge though, thanks to Yasir once again.

ENGLAND WIN!! Shaheen Afridi has conceded a boundary of Woakes' edge and that's the winning runs. England are over the line with 3 wickets to spare in an absolute thriller at Manchester.

Yasir can't dislodge another one as Bess negotiates that over. Woakes on strike now with 4 runs to go against Shaheen Afridi.

OUT! Yasir Shah has struck again! Stuart Broad has been trapped LBW. England are 7 down and Yasir has 4 wickets. Dom Bess to walk in now.

Yasir Shah with the new ball and England need 5 runs to win. Can he pull something out of here?

Four! Woakes has creamed Shaheen Afridi down the ground for a boundary. The young man's bowled a no-ball as well in the over and the presure is telling on him.

Two runs of the 80th over which was bowled by Yasir Shah, who's getting the batsmen to play and miss. He's bowled his heart out! New Ball taken by Pakistan and Shaheen Afridi to come onto bowl. England need 13 runs to win.

Four! Broad pulling out the sweep once more against Shadab Khan and finds the square leg boundary with ease.

Broad negotiates the first ball he faces from Yasir Shah with a sweep. He keeps strike. England are 257/6.

England have sent in Stuart Broad ahead of Dom Bess! 21 runs to win for England and Pakistan need 4 wickets.

OUT! Huge wicket for Pakistan as Yasir Shah has trapped Jos Buttler LBW for 75. England review, but they've gone with the on field decision. England 256/6.

Six! Jos Buttler finds it in his arc and it's gone over the mid wicket boundary for a maximum. Huge hit in the context. England are 252/5 after 77 overs.

It's all very tight up in Manchester. England are 244/5 from 76 overs. Pakistan will be looking forward to the new ball that's due soon.

Buttler miscues a long hop but it's fallen safely and he will be relieved. Two runs from ths Shadab over for England. Woakes and Buttler battling on here under a lot of pressure.

Five runs from Yasir's over after a phase of tight bowling. England inching closer now and need 35 more to win this game.

Poor review from Pakistan as Azhar takes it up stairs. Woakes misses a sweep off Azhar Ali and Rizwan is very excited. But they've wasted they're last review and it could prove costly later.

Fantastic batting under pressure from Woakes and Buttler. Pakistan's shoulders are starting to drop a little here.

Yasir delivers a peach and finds the edge of Woakes' bat but the edge does not carry to the second slip. That was a close call. Two runs from that eventful over where Woakes played and missed as well. England need 47 more.

Woakes and Buttler keep it moving along. Pakistan are 12 overs from the second new ball! England need 52 runs to win.

Not for the weak hearted!

Shaheen joins the attack now with Yasir and has bowled a tight over. Just the couple of runs. Michael Holding suggests getting it up into the ribs of Woakes for better results. Time for drinks, England are 61 runs away from the win, Pakistan need 5 wickets.

Yasir Shah into the attack and there is some chatter going around trying to get him going. Rizwan behind the stumps is talking continously. Make or break time for Pakistan now. It's a pity that there aren't any fans for this game.

Four and Four! The Naseem Shah option is not working for Pakistan as Woakes has creamed him away for a couple of boundaries and brought up his half century as well!

Fifty! Fantastic knock by Jos Buttler here, turns Naseem round the corner and gets to the milestone. Much needed after the torrid time he had while keeping.

Woakes and Buttler have taken England to 200/5 and are possibly trying to win it before the second new ball is due after 19 more overs. England need 77 runs to win with Pakistan leaking a boundary every now and then.

Woakes is looking good with the bat and has beautifully driven Abbas through mid-on for four. He's come up trumps on cue and England need 83 more to win.

Buttler picks up the length brilliantly from Naseem and pulls him away strongly for a boundary. The partnership is now worth 71 runs with Chris Woakes. 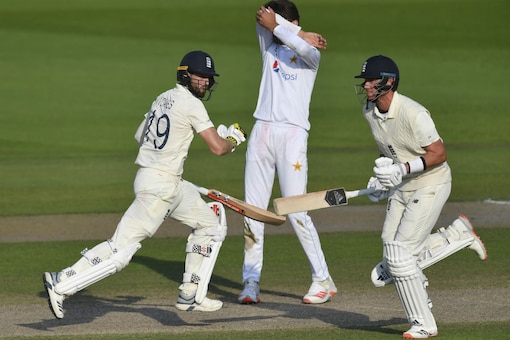 England vs Pakistan, 1st Test at Manchester, Latest Updates: TEA, DAY 4: England 167 for 5, need 110 more runs. England still in the game thanks to Buttler and Woakes. Pakistan hold the edge though, thanks to Yasir once again.

DAY 3 REVIEW: Ben Stokes took two late wickets to help drag England back into the first Test against Pakistan at Old Trafford on Friday. Pakistan, on top for most of this match, were 137-8 in their second innings at stumps on the third day — a lead of 244 runs. Stokes, who didn’t bowl in the third Test against the West Indies at Old Trafford last month because of a quad injury, took 2-11 in 20 balls. He struck with just his eighth delivery of the match when he had Mohammad Rizwan lbw for 27 on umpire’s call. And the paceman struck again before stumps when he had tailender Shaheen Afridi caught fending at a short ball.

But leg-spinner Yasir Shah, who had earlier taken four wickets, was still there at stumps on 12 not out. Pakistan were still relatively well-placed. Only twice have a team chased more than 200 to win in the fourth innings of a Test at Old Trafford, with England making 294-4 against New Zealand in 2008 and 231-3 against the West Indies at the Manchester ground in 2004. England were also trying to end a run of losing the first Test in each of their last five series, with eight of their past 10 openers ending in defeat.

There were, however, still two days left in the game, albeit on a wearing pitch where Yasir earlier took 4-66 — including three for four in 27 balls — as England were dismissed for 219 in reply to Pakistan’s first-innings 326. But Pakistan’s Shan Masood, who batted nearly eight hours for a Test-best 156 in the first innings, was out for a duck when caught behind down the legside off a poor Stuart Broad delivery. In-form paceman Chris Woakes reduced Pakistan to 63-4, having Babar Azam well caught in the slips by Stokes before Pakistan captain Azhar Ali, out for a duck in the first innings, was lbw for 18.

Wicketkeeper Rizwan, far more impressive behind the stumps than England counterpart Jos Buttler, batted well in a partnership of 38 with Asad Shafiq, until Shafiq was run out by Dom Sibley’s direct hit. England resumed Friday on 92-4, which represented an improvement on their dire position of 12-3 on Thursday. Ollie Pope was 46 not out and Buttler 15 not out. Buttler, with just one hundred from his previous 44 Tests, was under pressure to score runs after costly mistakes behind the stumps. He dropped Masood on 45 and then missed a chance to stump him on the same score — errors that intensified a debate about whether the World Cup winner should remain England’s red-ball gloveman.

Pope completed a composed 81-ball fifty. But there was little he could do when, on 62, a Naseem Shah delivery climbed off a good length to take the shoulder of his bat and went to Shadab Khan at gully. England suffered a fresh collapse after lunch, losing their last five wickets for 60 runs in 18.3 overs — a sequence that started when Yasir bowled Buttler between bat and pad for 38.