England vs Pakistan | Pakistan Must Hit the Ground Running Against England: Misbah-ul-Haq

Pakistan will have to hit the ground running if they are to have any chance against England in their three-test series which starts on Wednesday, coach Misbah-ul-Haq said. 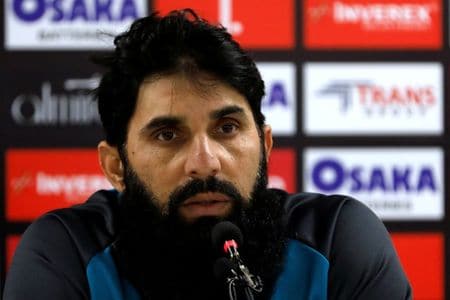 Pakistan will have to hit the ground running if they are to have any chance against England in their three-test series which starts on Wednesday, coach Misbah-ul-Haq said.

Six months since their last test match, Pakistan go into the games at bio-secure venues in Manchester and Southampton against an England team that beat the West Indies 2-1 last month as international cricket returned from the COVID-19 shutdown.

“We have to really come in this test series right from the word go at our best if we want to win a test series or a test match,” Misbah told reporters.

“We’re aware that England have a slight advantage, but if we’re alert and go 100% in the first test, that’s the only way we can beat England … otherwise we will find ourselves in difficulty.”

England have lost the first game in eight of their last 10 test series, including against the West Indies, but Misbah said the hosts’ latest defeat could have been due to the long break amid the novel coronavirus outbreak.

“That was their first test in a long time and obviously after that they played consistently,” said Misbah, adding, ” …we should be ready for an England team that have had three matches of experience and won their last two tests.”

Misbah said his players were mentally fresh ahead of the series.

“But test cricket is different,” he added. “Once you’re in, pressures build sometimes, but we’ll try to keep it so they’re mentally fresh regardless of the results.”