Bowling round the wicket, Stokes surprised Brathwaite with a short sharp one that returned to the bowler in the form of an easy catch. 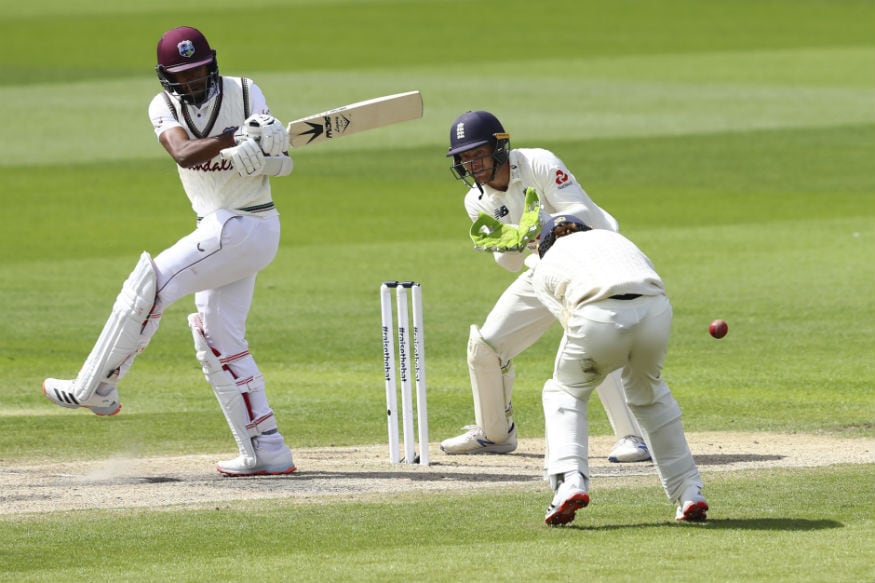 Led by Kraigg Brathwaite’s gritty innings of 75, West Indies enjoyed the bright sunshine in Old Trafford, Manchester as they made the England bowlers toil in the post lunch session on Day 4 of the second Test match.

Ben Stokes, like he does almost always, took matters into his own hands and helped the hosts claw their way back into the contest before the umpires called Tea.

Hungry for wickets, England started off the session with Stuart Broad and Sam Curran. The left armer answered his captain’s call in the third over of the session as Shai Hope (25) was dismissed caught behind with a wonderfully executed slower ball.

Broad at the other end had no success yet but had two very loud appeals against Brathwaite turned down, which added to his frustrations. What did not help the already frustrated senior pro was that Brathwaite dispatched him to the fence of consecutive deliveries right after.

Root then turned to the ever dependable Stokes who immediately induced a chance but the gap between the slip fielders let Brathwaite off the hook.

Shamarh Brooks meanwhile had got his eye in at the other end and decided one boundary an over would be the way to go for him, at least for the next half hour or so. None of Bess, Curran or Stokes were spared as Brooks and Brathwaite took the visitors to within 100 runs of avoiding the follow-on.

With Brooks ensuring there was a good mix of style and patience, Brathwaite continued to chip away, much like Dominic Sibley had done for England through the first day.

The duo put on 76 runs for the fourth wicket, the third half-century partnership of the innings, before Stokes finally had his man. Bowling round the wicket, Stokes surprised Brathwaite with a short sharp one that returned to the bowler in the form of an easy catch.

Brooks, joined by Roston Chase, took charge of the last half hour before Tea and completed his half-century and took the visitors to the break without any further scares.

At the break West Indies were 227/4 and need 43 runs more to save the follow-on.