Well, that's it for the day then

Windies will resume tomorrow on 32/1 in their first innings. pic.twitter.com/nrMSTnecVo

The update is that... there's no new update. Still raining, still under covers. The wait continues.

The second session would have been underway by now but it is still pouring at Old Trafford. The forecast for the remainder of the day is glum as well. Whether we will get any play at all today is debatable.

Lunch has officially been taken on Day 3. Rain is still around and it doesn't seem like we will get much play in the second session either. We'll know the exact state of things in 35 minutes.

It is almost lunch time at Old Trafford and the rain has refused to go away. Not a good sign for the remainder of the day. To make matters worse, the weather is showing no signs of abating.

The buzz from Manchester is that play could happen only after Tea, if at all there is any chance. Long way to go then! West Indies wouldn't mind it, given England are on top in the game.

We should have started by now, but we've not. It's raining in Manchester, and things aren't looking too good for the rest of the day as well. Let's hope we get some play!

Not so great news from Manchester is that rain could play a big part in proceedings today. We're set to have a delayed start as the conditions aren't great.

Former England captain Kevin Pietersen has termed the handling of Joe Denly as "atrocious", saying he is an attacking batsman and asking him to curb his natural game and then dropping him after his failure in the first Test is "truly abysmal". The 34-year-old Denly, who has played 15 Tests for England, was dropped from the ongoing second Test against the West Indies after scoring 18 and 29 in the two innings respectively in the series opener at Southampton.

England head coach Chris Silverwood agreed with Stokes, saying "Archer is a massive part of the group". "At times like this people are very, very tough and you can feel like you are all by yourself, but I don't think anybody is going to allow that to happen," he said. "Jofra's a massive part of this group, as everybody is. If it was anybody else bar Jofra it would be exactly the same."

"It's making sure that it doesn't feel like he's by himself. The worst thing we could do right now as a team is just leave him and see him in five or six days' time. "It's all good being there for people when things are going well and smoothly but what really comes through is how you operate with someone when they need you the most," said Stokes who led England in the first Test, which they lost by four wickets, in the absence of Joe Root.

England all-rounder Ben Stokes says star pacer Jofra Archer needs full support of his teammates following his bio-secure protocol breach which led to his dropping from the ongoing second Test against the West Indies here. Archer will undergo two COVID-19 tests during a five-day isolation period after his unsanctioned trip to Brighton between the first and second Tests. Stokes, who scored 176 to guide England to 469 for 9 declared in their first innings at Old Trafford on Friday, said it is the team's duty to not let Archer feel isolated during this tough phase. "We really need to be there to support Jofra right now. Obviously he's a big talking point and he is by himself because of everything else going on at the moment," Stokes was quoted as saying by Sky Sports.

Hello and welcome to the third day of the second Test between England and West Indies at Old Trafford. England, with the help of Ben Stokes' and Dominic Sibley's tons, have taken a huge first innings score. All down to their bowlers to restrict the Windies batting. Let's find out how the day pans out for both the sides. 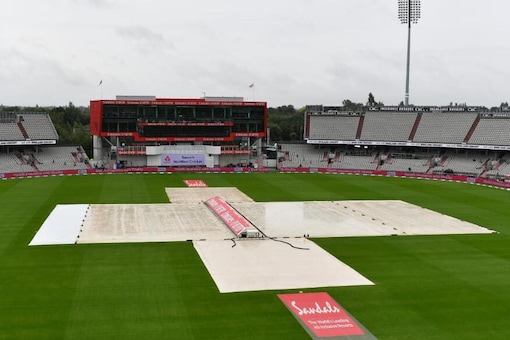 England vs West Indies 2nd Test Day 3 latest updates: Day 3 has been washed out by rain.

Off-spinner Roston Chase took 5-172 in 44 overs as he again troubled England, having taken a Test-best 8-60 against them in Barbados last year during a victory that helped the West Indies regain the Wisden Trophy. Sibley’s hundred was one of the slowest in Tests by an England batsman, the opener batting for 471 minutes — nearly eight hours — to complete a 312-ball century featuring a mere fours. But the 24-year-old Warwickshire right-hander’s second hundred in his eight Tests, following his 133 not out against South Africa at Cape Town in January, was a valuable innings.

And he made normally reliable West Indies captain Jason Holder pay for dropping him in the slips on 68. Run-scoring was difficult against a swinging ball and on a sluggish outfield, with even the usually fluent Stokes taking nearly six hours and 285 balls to complete his 10th Test century. But Stokes’ third fifty came off just 46 balls and, having given Sibley a “head start” of 31.2 overs, he overtook his team-mate’s total. England resumed on 207-3, with Sibley 86 not out and Stokes, their stand-in captain when Root missed last week’s four-wicket loss in the first Test at Southampton to attend the birth of his second child, unbeaten on 59.

West Indies made a wayward start on Friday, with Shannon Gabriel bowling several wide deliveries. Stokes, 99 not out at lunch, went to three figures with a cheeky reverse-swept four off Chase. Holder delayed taking the new ball until the 94th over, perhaps concerned it would make run-scoring easier for England. As if proving that point, Stokes promptly clipped his rival all-rounder through midwicket for four. The left-handed batsman upped the tempo still further with a remarkable check-drive six over midwicket off a respectable Alzarri Joseph delivery.

Having batted for over nine hours Sibley holed out to deep midwicket off Chase. It was the end of England’s second-highest fourth-wicket partnership against the West Indies, behind the celebrated stand of 411 by Peter May and Colin Cowdrey at Edgbaston in 1957. Stokes, dropped in the gully on 157 off Gabriel, then gave Roach something to celebrate at last. In his 71st over of the series, the persevering paceman had Stokes, attempting an ambitious reverse sweep, caught behind to end a 356-ball innings featuring 17 fours and two sixes.

But with this match being played behind closed doors because of the coronavirus, Stokes walked off to a ripple of applause from his team-mates rather than the roar of a crowd that greeted his match-winning Ashes hundred at Headingley last year. England’s 395-6 became 395-7 when next ball Roach, whose last Test wicket before this series came when he dismissed India captain Virat Kohli in Kingston in September, removed Chris Woakes with the aid of a gully catch. Jos Buttler made 40 and Dom Bess a useful 31 not out before Root declared.