Back to News18
Home » Cricket Home » News » England vs West Indies 2020, 3rd Test, Day 2 at Manchester Highlights: As It Happened

England vs West Indies 2020, 3rd Test, Day 2 at Manchester Highlights: As It Happened

England vs West Indies Live Score, Eng v WI 2020 3rd Test at Old Trafford Manchester: The bad light has halted play and it is officially stumps on Day 2.West Indies end the day on 137-6, not ideal in their quest to retain the Wisden Trophy. England, meanwhile, will be pleased with the way they've played on the day and will look to continue the same tomorrow.

The bad light has halted play and it is officially stumps on Day 2.West Indies end the day on 137-6, not ideal in their quest to retain the Wisden Trophy. England, meanwhile, will be pleased with the way they've played on the day and will look to continue the same tomorrow.

England are well on top now.

England get another one 💥

The 100 is now up for West Indies and they will look to kick on for here. Blackwood has been joined by skipper Jason Holder and the two have been solid thus far. There's still more than a few overs remaining in the day though.

OUT! Broad gets his second wicket and Roston Chase has to walk. He pitches one up that swings in towards Chase and raps him on the pads. The umpire didn't hesitate before raising his finger. West Indies in some trouble now.

Chase and Blackwood are surviving for now, but only just. Broad got one to zip past the edge of Chase and the same batsman edges one off Archer that doesn't carry to the slips. England's bowlers would be disappointed to not get another wicket or two before the day ends.

At this stage, West Indies would be happy to get through the day with the number of wickets they have in hand now. England are definitely in the drivers seat in this match and their bowlers seem hungry for more wickets.

OUT! Anderson strikes in the first over after tea. He gets Shamarh Brooks to inside edge one to Jos Buttler and West Indies are now four down. Not an ideal place for them to be at all.

It's tea now and that was a decent session for the hosts. They've taken 3 wickets and know that if they can get a couple more before the close of play they will be in a decent position. West Indies need a big partnership in the final session.

OUT! Anderson strikes with his trademark late out-swinger and Hope has to depart. He plays at the ball angling in but the hint of late out-swing induces the edge and Buttler takes a simple catch.

The 50 is up for West Indies in 21 overs as they are currently 55-2. It's not the worst of starts but they need a big partnership if they are going to overhaul England's first innings total of 369.

OUT! Archer strikes and it is Campbell who has to depart. A perfectly directed short ball - directed right at the ribs - leaves Campbell in knots and he spoons a simple catch to Rory Burns. Exactly what England needed.

Campbell and Hope have been steady thus far in the second session. Hope has been more defensive whereas Campbell has looked to play his shots whenever the chance arose. So far, England's bowlers have toiled hard but have little to show for it.

Change of bowlers at both ends now as Jofra Archer and Chris Woakes are brought into the attack. England would want at least another couple of wickets before tea in order to put themselves in a dominant position.

Anderson and Broad have continued to plug away but Hope and Campbell have stood firm thus far. Campbell belts one off Anderson for a boundary and the ball seam is damaged and needs to be replaced.

DROPPED! Campbell edges one to second slip and Ben Stokes - who has been seemingly invincible all series - drops what is a routine catch. Everyone is shocked. Stokes is frustrated.

OUT! Broad strikes and Brathwaite has to depart. He gets the opener to edge one to slips and England have an early breakthrough. They will be looking for more wickets now.

Hello and welcome to the second session of Day 2 of the final Test between England and West Indies. Kraigg Brathwaite and John Campbell are out in the middle and James Anderson has the new ball in hand.

OUT! Holder brings himself back on and he gets Anderson to edge one to Cornwall at slip. England are all out for 369 and it is now lunch time. How will West Indies respond to this? We'll find out in a bit. Stay tuned.

Broad's innings has definitely put England in the driver's seat. If they can get to 400 now it'll be even better for the hosts.

Has Stuart Broad's innings put England back on top?#ENGvWIpic.twitter.com/glxV8UKN0O

OUT! Broad goes for the big shot and perishes. A full-toss from Roston Chase sees Broad go for the slog sweep but he picks out Blackwood and deep mid-wicket. England's innings is creeping towards the end now. 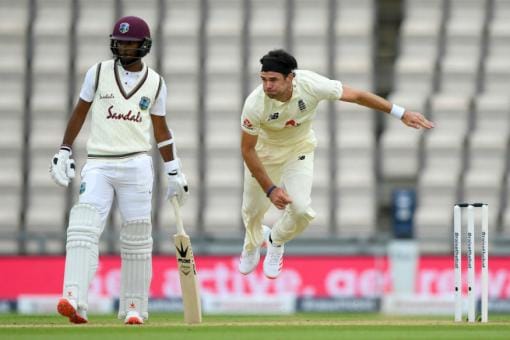 England vs West Indies 3rd Test Day 2 latest updates: The bad light has halted play and it is officially stumps on Day 2.West Indies end the day on 137-6, not ideal in their quest to retain the Wisden Trophy. England, meanwhile, will be pleased with the way they've played on the day and will look to continue the same tomorrow.

Jos Buttler might have silenced a few critics enroute his 56 from 120 balls on the first day of the third Test against West Indies at Manchester on Friday. Especially when the knock came at the backdrop of severe criticism regarding his form.

But what would have been more satisfying for him would be that his innings, along with that of Ollie Pope's 91 not out bailed England out of trouble. From 122/4 to 258/4, the duos unbeaten 136-run partnership ensured England ended the day on a high.

After being put into bat by the West Indies, the visitors made the best use of the overcast conditions as Kemar Roach got previous match's centurion -- Dom Sibley for a duck. Roach was bowling with a lot of sting and venom, and so was Shannon Gabriel. But the pair of Rory Burns and Joe Root combined well to take the score to 47, before the latter was run out for 17, thanks to brilliant bit of fielding by Roston Chase.

Again a small partnership was starting to flourish between Burns and Stokes. But Roach cleaned Stokes up after peppering him with a few short balls. Despite the loss of wickets of the other end, Burns went about his business and scored yet another fifty. He looked good for more, but a stunning catch from Rakheem Cornwall, off Chase, undid all the hard yards that he had put in his innings of 57.

England were reeling at 122/4 and needed a big partnership. And that is where Buttler and Pope showed their class. Both the players were a little slow off the blocks and scored at snail's pace during the second session of the day. But that came to a complete change in the third session and Pope guided the way with a few cracking pulls.

On the other end, Buttler too found his groove and smacked Cornwall for two sixes in the same over. And that proved detrimental in breaking the confidence of the opposition bowlers. From there on the English side never looked back and kept scoring runs at will.

While Pope hit 11 fours, Buttler hit five fours and two towering sixes. The day's play abruptly came to a halt during the 86th over of the day due to bad light, but not before England had scored 258/4.