England vs West Indies 2020, 3rd Test, Day 3 at Manchester, Highlights: As It Happened

England vs West Indies Live Score, Eng v WI 2020 3rd Test at Old Trafford Manchester latest updates and live cricket score: And after 6 overs, it is stumps. WI are 10-2 and will be hoping and praying the rain Gods shower Old Trafford tomorrow. England, for their part, have set themselves up well enough even if that happens. What a day it was.

And after 6 overs, it is stumps. WI are 10-2 and will be hoping and praying the rain Gods shower Old Trafford tomorrow. England, for their part, have set themselves up well enough even if that happens. What a day it was.

Broad on fire already. And Windies in trouble.

Another one for Broad! 💥

OUT! Broad - who else - strikes early and Campbell has to walk. He gets one to swing out after two that angled in, what a set-up that was! England have the early breakthrough they would have wanted.

We are now back underway with the final innings of the Test. Will West Indies be able to survive the remaining overs without losing wickets? That will be their main aim for now.

Well there comes the declaration! Burns goes for a big slog but top edges one that replacement 'keeper Joshua Da Silva easily takes. England declare at 226-2 and West Indies need 399 to win. Given the rain forecasts for tomorrow, England will believe they have more than enough time to bowl the visitors out.

England's lead is approaching the 400-run mark now and they are well past 200. Root is looking to constantly attack and score quickly. Is there any chance of a declaration just yet?

England's lead is now passed 350 and Burns is on 80. Root is on a run-a-ball 35 and England are on control. West Indies in cruise control at this point, seemingly waiting for something to happen rather than trying to make something happen.

FOUR: Root pulls Holder for a four, and runs are coming easy as usual. West Indies, it is fair to say, are just waiting for England to declare their innings. It's 158/1.

Despite that one wicket nothing seems to be working for the West Indies. The lead has stretched to 314. They don't have any options up their sleeve too.

The departure of Sibley hasn't slowed down England's innings that much. Joe Root has looked to score quickly and England's lead now stands in excess of 300. West Indies need more wickets.

OUT! Sibley has to depart and Holder finally has his man. The previous delivery saw an LBW shout turned down and a review saw it ruled umpires call. No such luck this time. Sibley is trapped plumb and desperately reviews but loses the review due to three reds. West Indies have their breakthrough.

Sibley and Burns have both brought up their respective half-centuries and England are in a commanding position now. The spin of Cornwall and pace of Roach haven't been effective for the visitors thus far in the innings.

100 is up now for England and their lead is nearing the 300-run mark. Both openers are nearing their half-centuries too. West Indies need a wicket fast because England right now are cruising.

Hello and welcome back to the live coverage of Day 3 of the final Test. England have chugged along nicely thus far but West Indies will want a few wickets, and fast. It should be a fun final session of play.

So it's tea time now. England are in excellent position here at the moment going into tea. The score has moved to 86 and the overall lead is 258.

Roach replaces Chase now. The session is coming to an end, let's see what the fast bowler can produce here. England are in a dominant position here at 85/0.

There seems to be no fight from the Windies bowlers right now. A wicket here would be more than welcome. But both Burns and Sibley are well settled here. England are 74/0. Lead moves to 246.

Runs haven't come easy till now but England have managed not to lose a wicket. This partnership is going strong as England are 57/0. The lead moves to 229.

50 PARTNERSHIP: Wickets don't seem to be coming for the Windies from anywhere. They are in deep trouble as the lead for England has gone upto 222. The partnership is also worth 50 now.

Chase in middle of an excellent spell against Burns here. He is turning the ball sharply and troubling the batsman. But a wicket still eludes West Indies. The score moves to 40/0.

Slightly odd tempo this from England. They've attacked just 8% of deliveries, almost identical to the 7% they attacked at the same point in the first innings. No rush quite yet, but they won't want to continue taking time out of the game. #ENGvWI

Chase almost had the better of Burns. He turns the ball sharply and Burns is out of the crease. But the keeper misses the stumps narrowly. England are 38/0.

Now Joshua De Silva has donned the gloves for West Indies. They would hope for change of fortunes now. The score has moved to 32/0.

Spinners might be the right way to go for Windies right now. They have to think wickets, but the pitch looks great for batting at the moment. England are 25/0.

West Indies will have to be careful with the no balls here. There have been instances where Windies have gotten wickets on no balls. For now England are 22/0.

INJURY SCARE: Shane Dowrich has been hit by a nasty short one from Shannon Gabriel. He has gone off the field and Shai Hope will take the gloves now.

West Indies need some quick wickets here to be able to stay in the match. If they go without a wicket in this session, there is no way they can win this Test. England have taken their lead to 185.

A good first over from Kemar Roach comes to an end. England though are in a comfortable position and would be in no hurry at the moment. It's 12/0 right now and the lead is 184.

And the second session gets underway. England are 182 ahead at the moment and they will have a target in their mind that they want to set for the Windies.

Burns and Sibley do well to negotiate the four overs after the innings break and that will be lunch. England are 10-0 and lead by 182 runs now. They will fancy their chances of setting the visitors a big target. Join us back in a bit to see how they fare. 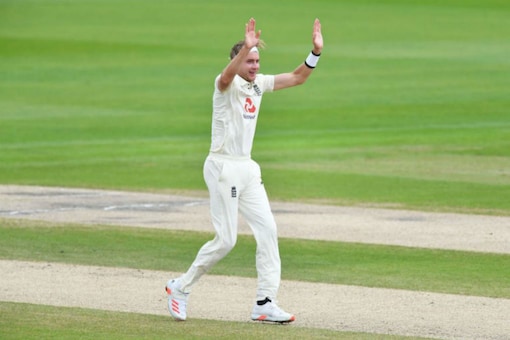 England vs West Indies 3rd Test Day 3 latest updates: And after 6 overs, it is stumps. WI are 10-2 and will be hoping and praying the rain Gods shower Old Trafford tomorrow. England, for their part, have set themselves up well enough even if that happens. What a day it was.

England had slumped to 280-8 after losing four wickets for 18 runs before No 10 Broad's swashbuckling 62 took them to a first innings total of 369.

When bad light forced an early close, the West Indies were 232 runs behind, needing 33 more to avoid the follow-on.

West Indies captain Jason Holder was 24 not out and Shane Dowrich 10 not out.

Veteran new-ball duo Broad and James Anderson, paired together for the first time this series, both had stumps figures of 2-17.

Broad struck with just his fourth ball to have West Indies dangerman Kraigg Brathwaite caught at slip by England captain Joe Root for one.

But fast bowler Jofra Archer, back after being omitted from England's 113-run win in the second Test for breaching the bio-secure regulations governing this series, produced a rib-high delivery that left-hander Campbell could only fend to gully.

Anderson, England's all-time leading Test wicket-taker, then struck either side of tea on his Lancashire home ground as the tourists slumped to 59-4.

Shai Hope, struggling for runs this series, was squared up by an Anderson delivery that moved away late -- a desperately difficult ball to play -- and was caught behind for 17.

After the interval Anderson got one to come back the other way to Shamarh Brooks, and this time the batsman inside edged to wicketkeeper Jos Buttler.

In a campaign that marks international cricket's return from lockdown, Broad then produced a classic nip-backer to have Roston Chase lbw for nine, the batsman not bothering with a review as West Indies collapsed to 73-5.

Jermaine Blackwood, who made a match-clinching 95 during West Indies' four-wicket win in the first Test, looked good while making 26.

But he had his middle stump knocked out of the ground when Chris Woakes nipped one off the seam.

Dowrich, fresh from two ducks in the second Test, was lucky when he got in a tangle against an Archer bouncer only for the ball to just clear the back-pedalling Rory Burns in the gully.

England, with all-rounder Stokes unfit to bowl following a quad injury, opted to play an extra seamer by dropping batsman Zak Crawley as they looked to win this three-match series 2-1.

They had lost early wickets but resumed on 258-4 after losing the toss.

Ollie Pope was 91 not out and Buttler unbeaten on 56 -- his first Test fifty in 14 innings.

Pope, however, failed to add to his score.

In sight of his second Test century, Pope had already been dropped by Rahkeem Cornwall in the slips when Shannon Gabriel clean bowled him to end a fifth-wicket stand of 140.

Woakes promptly played on to give Roach, who finished with 4-72, his 200th Test wicket.

Buttler was well caught low down for 67 by Holder at second slip.

But Broad, who has a highest Test score of 169, counter-attacked with his first fifty at this level in just over three years.

On a ground where he was hit on the face by a bouncer from India's Varun Aaron in 2014, left-handed batsman Broad pulled Roach for six as the new ball started to soften.

Broad pulled Holder for four to complete a 33-ball fifty before hitting a full-toss from occasional off-spinner Chase to deep midwicket.