England vs West Indies 2020, 3rd Test, Day 4 at Manchester, Highlights: As it Happened

England vs West Indies Live Score, Eng v WI 2020 3rd Test at Old Trafford Manchester latest updates and live cricket score: TEA: Now tea has been taken and we will have to wait more for rain to go away. Join us in 20 minutes.

So that's that then! The umpires have decided that there can be no play in the current situation and have abandoned the day. We'll be back for the final Day tomorrow.

TEA: Now tea has been taken and we will have to wait more for rain to go away. Join us in 20 minutes.

Kemar Roach became the first West Indies bowler since the legendary Curtly Ambrose 26 years ago to go past 200 Test wickets during the ongoing third Test against England at Old Trafford. After going wicketless for nearly 11 months of Test cricket, Roach broke the duck in the second Test and picked four during the England innings in the third.

The England one-day side will go into an on-site training camp at the Ageas Bowl on July 16, playing two intra-squad warm-up matches before the selectors pick a final team. The series, being played behind closed doors, starts on July 30, with subsequent matches on August 1 and 4. England also hope to play three Twenty20 internationals against Pakistan in August and September, with three T20s and three ODIs against Australia originally scheduled for July still to be re-arranged.

Ali had ended his self-imposed Test exile, but was overlooked for the series against West Indies and instead Dom Bess and Jack Leach were picked. England assistant coach Paul Collingwood, the captain of the England side that won the 2010 World Twenty20 in the Caribbean, will be the head coach for the series, with former England opener Marcus Trescothick in his backroom staff.

With Jos Buttler busy representing the side in Tests, he has been chosen as Eoin Morgan's deputy. “Moeen Ali has been confirmed as Eoin Morgan’s vice-captain for England Men’s three-match Royal London Series against Ireland,” an England and Wales Cricket Board statement said.

It has started to rain again. It doesn't look good at the moment at all.

England's 14-man squad named Monday to play Ireland in a three-match one-day international series at the Ageas Bowl, Southampton, starting on July 30. Eoin Morgan will captain the side with Moeen Ali named as his vice-captain last week.

The ground will be assessed by the umpires in an hour's time. Hopefully some play will be possible today. Moreover England would fancy finishing the match today itself if the play begins.

GOOD NEWS: Finally the rain has stopped, and groundstaff are getting the ground ready for play. But it will take some time though.

So the first session of day four has been washed out and lunch has been taken. Join us in few minutes from now to find out if play is possible in the second session or not.

"Broad made the point that he's actually quite a bit younger than James Anderson. Of course everyone brackets Broad and Anderson together because they've played together for so long," Artherton said. "True, he's not going to get anywhere near Muttiah Muralitharan at 800 but just to be the fourth fast bowler to get 500 wickets would show remarkable longevity and stamina.

"After being left out for the first Test at the Ageas Bowl, he had some things to say about it but my, has he backed up those words with actions. When you look at the way he's bowled in this match, he just looks like he's going to get a wicket every ball," Atherton said. Recently, Broad said he wanted to emulate compatriot James Anderson, who is still going strong at 37. The duo had been leading England's bowling attack for years and are considered as one of the most successful fast bowling pairs in world cricket.

Broad, who is England's all-time second highest wicket-taker in the longest format of the game, had minced no word in criticising the decision of leaving him out of the first Test, which the hosts lost against the West Indies. But brought back into the side for the remaining two games, Broad went on to claim six wickets in the series-levelling second Test before handing England the advantage with eight wickets in the ongoing final Test.

"When you get left out, that's when you find out a little bit more about yourself. Some players, when they get to that stage and get left out, they might just say, 'Well, I've done enough with my career'. "But clearly Stuart Broad, with that fire in the belly he showed, has got more to come and he doesn't just want to get 500 wickets - he wants to get up to 600 as well," Atherton added.

As the series approaches a conclusion, Broad is the highest wicket taker for England with 14 wickets on the morning of Day 4 of the third Test. The next best England bowler in the series in terms of wickets taken, is Ben Stokes with nine wickets, and he is unlikely to bowl again in this Test.

He ended the third day of the series decider with 499 Test wickets, just one short of the coveted 500 mark. "The mark of a champion sportsman is not when you get knocked down, but how you bounce back and we've seen that in this series with Stuart Broad," Atherton wrote in a column for 'Sky Sports'.

Veteran pacer Stuart Broad has shown that he still has "fire in the belly" to achieve a lot more for England, according to former skipper Michael Atherton, asserting that the "champion sportsman" has the potential to claim 600 Test wickets. After being ignored for the series opener against the West Indies in Southampton, the 34-year-old pacer silenced his critics by putting up scintillating performances in the remaining two Tests.

WEATHER UPDATE: It is still raining in Manchester, and looks like start of play will only be possible after lunch. Clear skies are expected in the afternoon.

"Dom Sibley has shown that he can bat time and if he can bat time at the top of the order, we've got the players down the order to accelerate the scoring rate. "We just need someone to get a partnership with the new ball, we've got two guys there who are capable of doing it in (Rory) Burns and Sibley. Let's just stick with them and stop looking for problems," he added.

Gough, who has picked 229 wickets in 58 Tests for England, believes Sibley's ability to play long innings makes him similar to former batsmen Michael Atherton and Alastair Cook and he can make an impact at the top of the order for England. "I like him, he hates getting out and that is what we've been crying out for! We talk about wanting batsmen like Atherton or Cook at the top of the order, well we've got him," Gough said.

"Ashwin is one of the best spinners in the world, if not the best, and he got a double against him and smacked him to all parts apparently. So, if he can play against Ashwin and get a double, he's good enough for me!" Playing for Warwickshire, Sibley had scored an unbeaten 215 against Nottinghamshire last year with premier India off-spinner Ashwin being among the opposition bowlers.

On Sunday, Sibley had struggled a bit to up the tempo when West Indies introduced spinners during the third day of the third Test at the Old Trafford. "People keep telling me he can't play against spin. I got told the other day that he got a double hundred against Ashwin," Gough said on 'Sky Sports'.

Former seamer Darren Gough has vouched for England opener Dom Sibley's ability to play spin, saying if he could dominate India's R Ashwin on way to a double ton in county cricket, he is good enough to play any spinner in the world. The 24-year-old Sibley, who has scored two fifties and a hundred in the ongoing Test series against the West Indies, has faced criticism from some quarters for his slow batting.

Jofra Archer isn't too pleased, much like many English fans

The one time the weather app is right -_-

Not a great start to Day 4 if you're an England fan. If you're a West Indies fan though, you'll be happy. It's raining in Manchester and the start is set to be delayed. A ray of hope for West Indies? 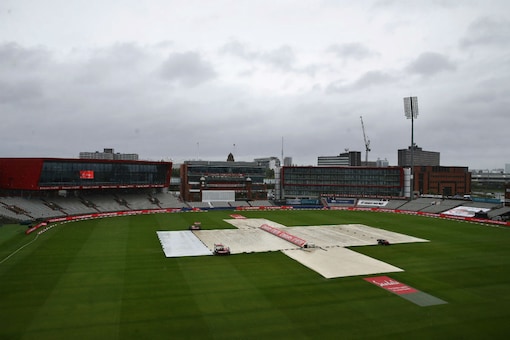 England vs West Indies 3rd Test Day 4 latest updates: TEA: Now tea has been taken and we will have to wait more for rain to go away. Join us in 20 minutes.
strong>Day 3 report

England had the West Indies reeling at 10 for two wickets after setting them an imposing target of 399 runs to win the third and final test at Old Trafford with Stuart Broad again dominating as he moved one away from 500 test wickets.

Broad, who had taken four wickets in the tourists’ first innings in the morning, continued by removing opener John Campbell without scoring and then nightwatchman Kemar Roach (4) after the West Indies were put in for the last six overs of the day.

England had declared on 226 for two in their second innings as Rory Burns scored 90, Joe Root a quickfire 68 and Dom Sibley 56.

They accelerated the run rate in Sunday’s evening session, seeking to build a large lead but still leave themselves enough time to bowl the West Indies out again and win the test.

England were hastened by the prospect of Monday’s play being heavily curtailed by rain, leaving them the last day’s play on Tuesday to try engineer victory and take the series 2-1.

Burns had to sacrifice the personal milestone of a test century to allow England a chance to bowl at the tourists in the late afternoon gloom, in search of an early inroad.

He abandoned the studied approach that got him to the 80s to slash at the ball and was out when he skied spinner Roston Chase straight up into the air and caught.

Root was not out, scoring his runs off just 56 balls as he went after the bowling with characteristic flair.

Sibley was the first England wicket to fall after a 114-run partnership with Burns, trapped leg before wicket by Windies captain Jason Holder.

England began their second innings just before lunch after Broad finished with figures of 6-31 in 14 overs, mopping up the tail to dismiss the West Indies for 197 in the first innings and give his side a 172-run lead.

But it took a frustrating 54 minutes for England to make a breakthrough after the West Indies had resumed on 137-6, facing the possibility of being asked to bat again.

Holder led the fightback as he scored an important 46 runs to help his side avoid the follow-on before Broad had him lbw.

The series is level after West Indies won by four wickets at Southampton before England secured a 113-run victory at Old Trafford.