England vs West Indies 2020, 3rd Test, Day 5 at Manchester, Highlights: As it Happened

England vs West Indies Live Score, Eng v WI 2020 3rd Test at Old Trafford Manchester latest updates and live cricket score: OUT! Fantastic piece of fielding at backward point from Dom Bess as he fires in a sharp throw at the stumps to run out Roston Chase. Very Jonty-esque run out from the England fielder. WI 87/6.

Having won the third Test in Manchester, England have wrapped up the series 2-1 and will take back the Wisden Trophy.

OUT! Stuart Broad comes on and finishes it off first ball. Blackwood caught behind by Buttler as Broad takes his 10th wicket of the game. Huge 269-run win for England in the third Test.

Four and Four! Blackwood flashes hard at a short one and then creames the next through extra cover. Takes a single off the last delivery to keep strike.

It's just a matter of time now with Shannon Gabriel and Jermaine Blackwood out there in the middle. England are on course for a very comprehensive series win. Perfect prep for the Pakistan Test series after this.

OUT! Woakes takes a five-for as Cornwall is trapped in front of the stumps. WI 119/9.

OUT! Woakes has struck again and Dowrich is trapped LBW for 8. The batsman's not waiting to review it either. England are two wickets away from the win.

An over eager England waste another review as they have a look at the caught behind against Blackwood. Mind you the keeper did go up very quickly, however Archer had not heard anything from the looks of it. WI 108/7.

Wonder if Brathwaite's seen this?

Archer from the other end is peppering Dowrich with some short stuff and the batsman won't be very keen to face that for too long. WI 101/7.

OUT! Holder's missed a straight fast one from Woakes and lost his wicket. LBW for 12. Fantastic comeback in the over from Woakes. England on the brink of a big win now.

Archer and Woakes as expected going for the kill here. Woakes, slighlty over eager, has wasted a review though and then allowed Holder to pick him away to third man for a boundary. The West Indies skipper follows that up with a couple of runs and a nonchalant flick through square leg for another boundary.

We are back with play but the dark clouds are still around. England will want to finish this as fast as they can.

Another look at the brilliant piece of fielding by Bess

Rate this from Bess 👇 pic.twitter.com/uFAk5oqkUK

OUT! Fantastic piece of fielding at backward point from Dom Bess as he fires in a sharp throw at the stumps to run out Roston Chase. Very Jonty-esque run out from the England fielder. WI 87/6.

Roston Chase and Jermaine Blackwood need to bat out plenty of deliveries here. England have their tails up and rightly so. Big ask for the visitors but there are plenty of dark clouds around the ground, which might just be of some help to them. WI 86/5.

We're back for the post lunch session and England need five wickets in conditions that favour their bowlers.

A while before Stuart Broad claimed his 500th wicket in Test cricket!

Great to see Stuart Broad taking the time to have a long long long long long chat to 23yr old West Indian fast Keon Harding. And all this on the morning that Broad stood on 499 test wickets at the start of play👏🏻👏🏻👏🏻 pic.twitter.com/VVwbXOj8S9

LUNCH: With this, lunch has also been taken on the final day of the Test series here.

RAIN: Rain strikes again. This time looks like it'll be a longer break. West Indies are struggling at 83/5.

OUT: Another one bites the dust. Woakes has his second wicket here and Windies are 79/5. This is looking to get before lunch today. Looks likes the session will be an extended one.

OUT: Woakes has a wicket here. Hope has mistimed one straight into the hands of Broad. He departs for 31. Windies seem to be in a hurry to end this match as the score is 71/4.

Besides the fall of the wicket, Shai Hope is looking good for a big one. Can he save the day for Windies? He is dealing in fours at the moment. The score has moved to 68/3.

West Indies need lots of rain to them in this Test and series. And the camera shows that it has started to drizzle again. Hopefully for England that wont be the case. Windies are 58/3.

OUT: Brathwaite is dismissed LBW by Broad and the bowler has his 500th wicket. What a milestone to achieve for a bowler. England are away. West Indies are in deep trouble at 45/3.

FOUR: Hope has looked class apart till now. He has driven the ball beautifully and does that again to Anderson. West Indies move to 41/2.

The rain has stopped now and the covers are being removed. The match should resume any time now. Stay tuned for latest updates.

RAIN STRIKES: And we have the first rain break of the day. West Indies were playing well in this short passge of play. Looks like only a passing shower. It's 35/2.

The pair of Brathwaite and Hope are fighting well for the moment, but they have a steep mountain to climb. They would hoping for some rain during the course of the day. The score moves to 29/2.

In the two overs that have been bowled, the pitch has looked decent and the bounce has been even till now. Hope has shown good footwork till now. But it takes just one delivery to get out. It's going to be a long day for Windies batsmen. It's 16/2.

Anderson starts with a maiden and the score remains 10/2. Brathwaite needs to stay positive and not get into a defensive zone. Hope on the other hand need to prove his critics wrong. 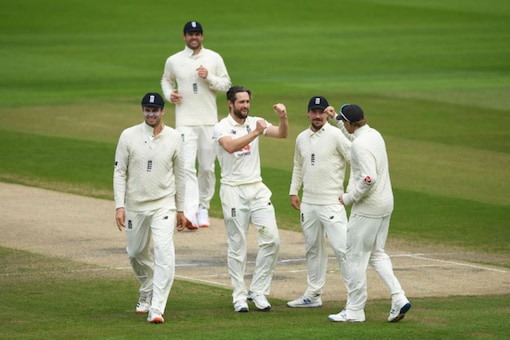 England vs West Indies 3rd Test Day 5 latest updates: OUT! Fantastic piece of fielding at backward point from Dom Bess as he fires in a sharp throw at the stumps to run out Roston Chase. Very Jonty-esque run out from the England fielder. WI 87/6.

Rain wiped out the fourth day’s play at Old Trafford on Monday to frustrate England’s bid for a series-clinching win over the West Indies and keep Stuart Broad waiting for his 500th Test wicket. Bad weather meant the whole of the penultimate day’s play in the deciding third Test was washed out, with the umpires finally abandoning any hope of action soon after 4:00 pm (1500 GMT). England do, however, still have one day left to press for a win that would see them take the three-match series 2-1. Broad is just one wicket away from becoming only the seventh bowler to join the “500 club” after taking all six West Indies wickets that fell on Sunday. The 34-year-old paceman returned first-innings figures of 6-31 as West Indies were bundled out for 197 in reply to England’s 369, which included Broad’s dashing 62.

And after England made 226-2 declared in their second innings, featuring Rory Burns’ 90 and fifties from captain Joe Root and Dom Sibley, there was still time for Broad to strike twice by removing John Campbell and nightwatchman Kemar Roach. That left Broad, controversially omitted from West Indies’ win in the series opener at Southampton, on 499 Test wickets. The only bowlers with more than 600 Test wickets are a trio of former spinners — Sri Lanka’s Muttiah Muralitharan (800), Australian Shane Warne (708) and India’s Anil Kumble (619).

The only seamers ahead of Broad are his long-time England new-ball colleague James Anderson (589 wickets) and Australia’s Glenn McGrath (563) and the West Indies’ Courtney Walsh (519), both of whom are retired. West Indies will resume on 10-2, chasing an unlikely victory target of 399. No side has made more to win in the fourth innings of an Old Trafford Test than England’s 294-4 against New Zealand in 2008. West Indies, who hold the Wisden Trophy after a 2-1 win over Root’s men in the Caribbean last year, are bidding for their first Test series success in England since 1988.