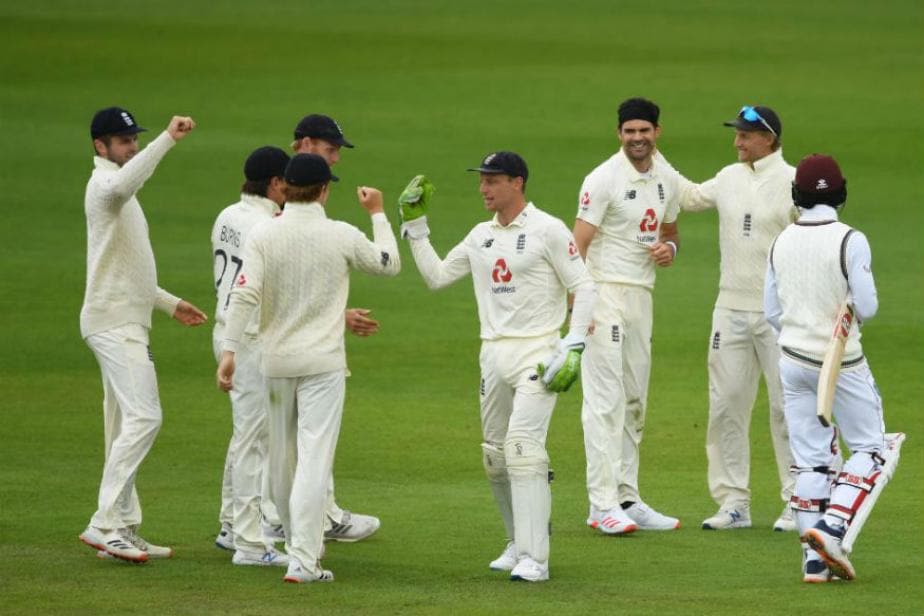 England had slumped to 280-8 after losing four wickets for 18 runs before No 10 Broad's swashbuckling 62 took them to a first innings total of 369.

When bad light forced an early close, the West Indies were 232 runs behind, needing 33 more to avoid the follow-on.

West Indies captain Jason Holder was 24 not out and Shane Dowrich 10 not out.

Veteran new-ball duo Broad and James Anderson, paired together for the first time this series, both had stumps figures of 2-17.

Broad struck with just his fourth ball to have West Indies dangerman Kraigg Brathwaite caught at slip by England captain Joe Root for one.

But fast bowler Jofra Archer, back after being omitted from England's 113-run win in the second Test for breaching the bio-secure regulations governing this series, produced a rib-high delivery that left-hander Campbell could only fend to gully.

Anderson, England's all-time leading Test wicket-taker, then struck either side of tea on his Lancashire home ground as the tourists slumped to 59-4.

Shai Hope, struggling for runs this series, was squared up by an Anderson delivery that moved away late -- a desperately difficult ball to play -- and was caught behind for 17.

After the interval Anderson got one to come back the other way to Shamarh Brooks, and this time the batsman inside edged to wicketkeeper Jos Buttler.

In a campaign that marks international cricket's return from lockdown, Broad then produced a classic nip-backer to have Roston Chase lbw for nine, the batsman not bothering with a review as West Indies collapsed to 73-5.

Jermaine Blackwood, who made a match-clinching 95 during West Indies' four-wicket win in the first Test, looked good while making 26.

But he had his middle stump knocked out of the ground when Chris Woakes nipped one off the seam.

Dowrich, fresh from two ducks in the second Test, was lucky when he got in a tangle against an Archer bouncer only for the ball to just clear the back-pedalling Rory Burns in the gully.

England, with all-rounder Stokes unfit to bowl following a quad injury, opted to play an extra seamer by dropping batsman Zak Crawley as they looked to win this three-match series 2-1.

They had lost early wickets but resumed on 258-4 after losing the toss.

Ollie Pope was 91 not out and Buttler unbeaten on 56 -- his first Test fifty in 14 innings.

Pope, however, failed to add to his score.

In sight of his second Test century, Pope had already been dropped by Rahkeem Cornwall in the slips when Shannon Gabriel clean bowled him to end a fifth-wicket stand of 140.

Woakes promptly played on to give Roach, who finished with 4-72, his 200th Test wicket.

Buttler was well caught low down for 67 by Holder at second slip.

But Broad, who has a highest Test score of 169, counter-attacked with his first fifty at this level in just over three years.

On a ground where he was hit on the face by a bouncer from India's Varun Aaron in 2014, left-handed batsman Broad pulled Roach for six as the new ball started to soften.

Broad pulled Holder for four to complete a 33-ball fifty before hitting a full-toss from occasional off-spinner Chase to deep midwicket.