Steve Smith has managed to get scores of 43, 16, 85 and 7 in Australia's ongoing Test series against New Zealand. Compared to his lofty standards, this is as lean a run as it gets, even though they are only two Tests into the series. 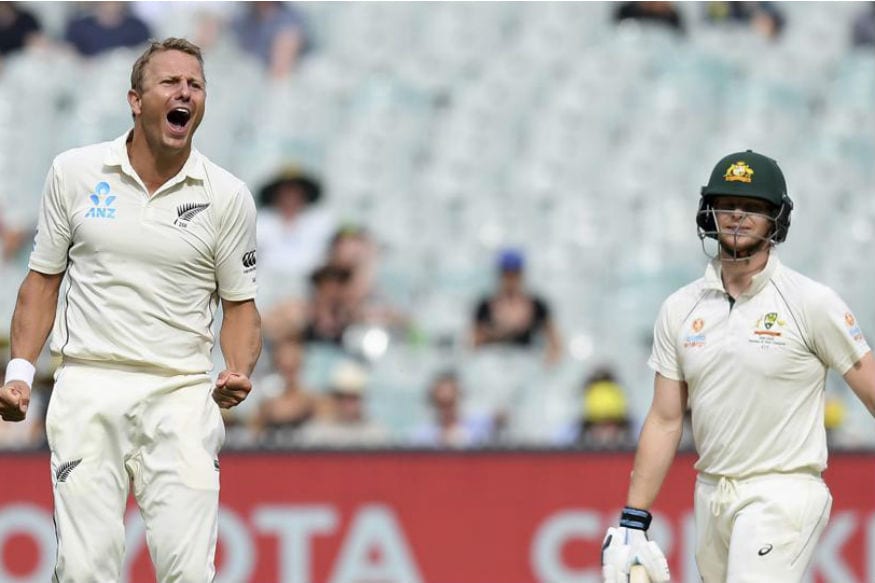 Steve Smith has managed to get scores of 43, 16, 85 and 7 in Australia's ongoing Test series against New Zealand. Compared to his lofty standards, this is as lean a run as it gets, even though they are only two Tests into the series.

All four of his dismissals have been against short balls delivered by Neil Wagner. In the first instance, he was caught at leg gully, followed by a catch at deep square, then at gully in the first innings of the Boxing Day Test with Henry Nicholls bagging a one-handed screamer and finally at backward square.

The last dismissal was Wagner's 200th Test wicket and he is the second fastest New Zealand player to get there after Sir Richard Hadlee.

Dismissing Smith is one of the biggest challenges that any team faces when they are playing Australia and Wagner has only gone and made him his bunny. This has pretty much been Wagner's season so far. When New Zealand hosted England before this series, he thrived on pitches that reaped lean dividends for other fast bowlers.

He took 13 wickets in four innings which included two fifers. The next best was his team mate Tim Southee who took seven. England spearheads Stuart Broad and Jofra Archer managed four and two scalps respectively and none of the bowlers -- pacers or spinners -- managed to get a fifer.

Wagner is not someone that Kane Williamson would turn to send down the new ball. His preferred mode of dismissal is through catches and his USP is the ability to relentlessly send short pitched deliveries whistling into the batsman.

During the first Test in Perth, where temperatures touched 40 degrees Celsius over the course of the match, Wagner ran in for a total of a whopping 60 overs over two innings, banging it in short for most of those. His gargantuan effort was one of the few positives for New Zealand as they lost the Test by 296 runs.

It has garnered praise from the opposition. "He's an absolute machine," said Travis Head, who defied him and the New Zealand attack to score a century in the first innings at the MCG.

"It's been very impressive the way he's gone about it. He just didn't stop, we were questioning who was going to bowl after tea and there was no surprise when he took his cap off and started up," he said.

Head was eventually dismissed at 114 at a point when he started looking for quick runs by -- no prizes for guessing -- Wagner. "He's an unbelievable athlete, and with the fields that they set, how consistent he is (bowling short) and his (varied) pace, I think that's what makes it difficult.

"He's got the effort ball that's on the money, with the other balls there are variations in pace off the wicket, and he's got the slower ball as well, so he's got a few tricks there." He's made it difficult for us over the two games, but I think the way we've been able to adapt to that from Perth was exceptional," said Travis.

Wagner has a simple theory -- the more balls you bowl, the more wickets you get. Anyone who has seen fast bowlers go about their business would tell you that this is a gross oversimplification of the process.

"I bowl a lot of overs," he had said after the England series, "And if you bowl the majority of the overs the chances are high that you can take some wickets, too. That's my role," said Wagner.

"One of my only attributes is that I bowl a lot of overs and I can back it up and keep going," he said. "I'm blessed with my body that it's been pretty good and I can bowl long spells. If you keep putting pressure on then hopefully wickets come your way."

New Zealand's success in Test cricket in recent years often goes unnoticed. They are ranked second, below the dominant Indian team. However, this season is a chance for them and the individual players to make the headlines due to the run-ins they have. T

They are done with the England series, which they won 1-0, and are now struggling in Australia. Wagner's consistency has been a consistent feature in both series thus far and the Kiwis would be hoping that this continues when they host India in February.