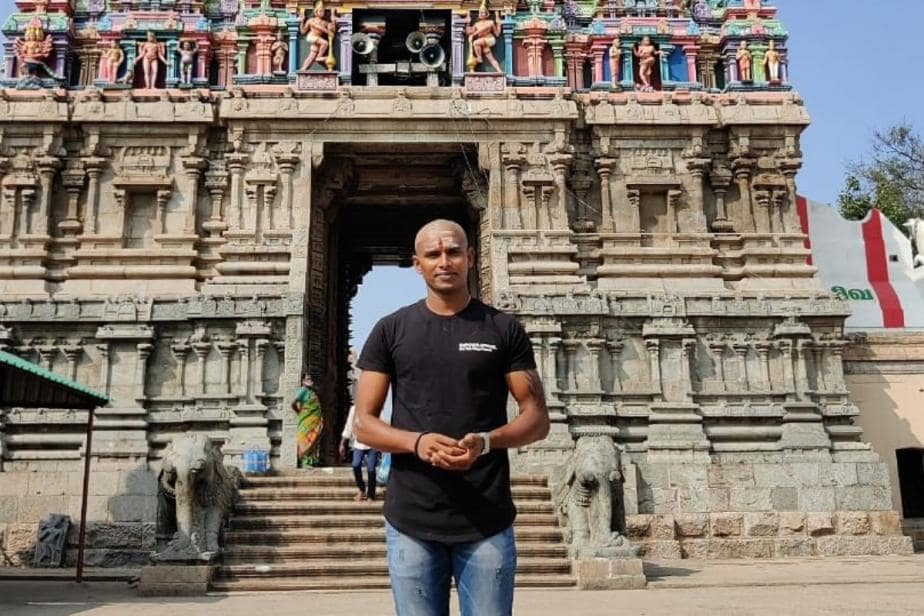 India left-arm seamer T Natarajan shaved his head at the Palani Murugan temple in Tamil Nadu and later shared a pic on social media. Natarajan, from Chinnapampatti village near Salem in Tamil Nadu, rose to fame in the IPL 2020 where his consistent performance for Sunrisers Hyderabad catapulted him to the Indian team for the tour of Australia.

India vs England: Virat Kohli in Line to Surpass MS Dhoni as Most Successful Skipper at Home

Natarajan had begun the tour as a net bowler and went on to make his debut in all three formats, and impressed in every given opportunity. Natarajan returned home to a rousing welcome. Natarajan had also missed the birth of his daughter as he was away in the IPL and then flew straight to Australia.

On returning home to Chinnapampatti in Salem district of Tamil Nadu, Natarajan received a hero's welcome. He addressed the press where he spoke about his experience in Australia, and said he had tears in his eyes when Virat Kohli handed over the T20 trophy to him.

"When Kohli handed over the trophy to me after the T20 series win, I had tears in my eyes," he said in Tamil.

"Having played in the IPL and played alongside many Indian and foreign players helped as that experience was useful. I could communicate with them and learn from them. First, it was tough but as things went on, I was able to pick up many things.

"I was keen to do my job. But I didn't expect to get an opportunity in the ODIs, was not expecting to make my debut in Australia," Natarajan told reporters in Chinnappampatti in Salem district.

"When I was told that I will be playing there was pressure. I wanted to make use of the opportunity. Playing and taking a wicket was like a dream."

Natarajan said playing for India felt like a dream.

"I cannot express my happiness in words about playing for India. It was like a dream. I got a lot of support from the coaches, players. They supported and motivated me a lot. I was able to perform well because of their backing," he said.

"My first aim was to play for Tamil Nadu, step by step everything happened, it was like a dream. Hard work is the key, it will take one places. I thank Almighty for everything."

"Other players supported me in the dressing room. Their motivation and support helped me.

"I was under pressure to perform, when the opportunity was offered. My only thought was to take wickets. It was like a dream to take Australian wickets."

Natarajan was also away from his family and missed the birth of his first child. After the IPL, he flew straight to Australia.

"More than the newborn, my wife and I were proud that I could play for my country," he said. "Hard work will never go to waste. It is always rewarding."