Former India opener Gautam Gambhir has once hogged the limelight with his remarks about foreign coaches getting associated with Team India. Speaking at an event on Wednesday, he backed the idea of getting a retired Indian player as the team’s coach rather than spending money on having someone from overseas.

Gambhir in his statement lauded the likes of Anil Kumble, Ravi Shastri, and current coach Rahul Dravid for their services. He said an Indian coaching the side is the best thing that has ever happened with Team India. But what raised a few eyebrows was his comment on foreign coaches. He stated that they only come here and vanish after making good money as there is no emotion involved.

The former cricketer, in fact shared the video of his speech on his social media accounts in which he could be heard saying,

“One really good thing that has happened in Indian cricket in the past six-seven years is that Indians have started coaching the Indian cricket team. I am a very strong believer in this. Indians should coach the Indian cricket team. All these foreign coaches, whom we end up giving a lot of importance to, they only come here, they make money, and they vanish. Emotions are involved in sports, and the only people who can be emotional about Indian cricket or Indian sports are the people who have represented their country. So, whether it is Rahul Dravid right now, or before him it was Ravi Shastri and Anil Kumble, I hope this trend continues. If you ask Rahul Dravid, probably he will be more passionate than all those other guys. I wish I had played under any one of these Indian coaches.”

Gambhir’s remarks didn’t go down well with several cricket fans as they recalled India’s 2011 World Cup triumph that came in the reign of Gary Kirsten and Gambhir was an integral part of the team. In fact, it was the last world cup won by Team India and since then, none of the Indian coaches could guide India to win an ICC championship.

Here’s how the fans reacted: 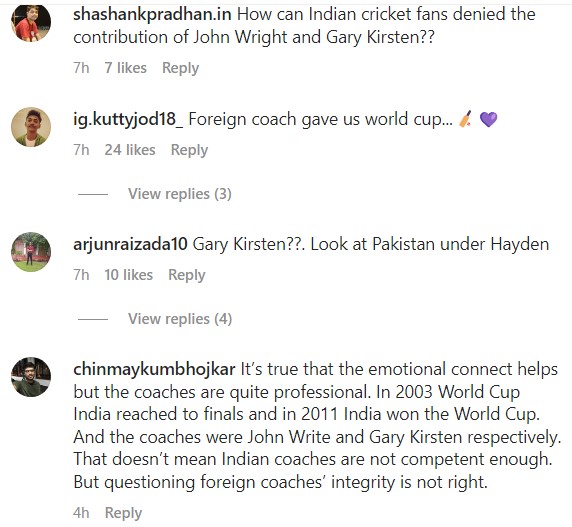 Gambhir made the remarks at a Federation of Indian Chambers of Commerce & Industry (FICCI) event in Delhi earlier this week. The southpaw took to social media on Wednesday to share a video of his speech.