Shubman Gill (35 not out) and skipper Rahane (27 not out) knocked off the runs in 15.5 overs to complete the victory. (Source: AP)

New records were set, milestones reached and there was plenty of entertainment for the cricketing world in the year. We look at 10 memorable moments and events from 2020.

Despite the world coming to a standstill due to the Covid-19 pandemic outbreak, there was some cricket played in the year 2020, mostly behind closed doors but yet enthralling with a few memorable matches and performances. New records were set, milestones reached and there was plenty of entertainment for the cricketing world in the year. New Zealand swept two home series in 2020 - the 2-0 win against India a massive win for them in the year. They also beat the West Indies 2-0 and have taken a 1-0 lead against Pakistan with a victory at Mount Maunganui. With 5 successive wins at home in the year, New Zealand jumped to the number one spot in the ICC Test Rankings for the very first time in their Test history and will be serious challengers to India and Australia for a place in the ICC World Test Championship Final in Lord’s in June 2021.

Skipper, Kane Williamson led from the front and was the architect of his side’s brilliant performance in 2020. He scored 498 runs in 4 Tests at an average of 83 including two hundreds and a fifty in the calendar year. He scored an under-pressure 129 in the first innings against Pakistan at Mount Maunganui helping New Zealand to a big total - the home team went on to win a thriller of a Test late on Day 5 to take a 1-0 lead in the two-match series. Williamson had recorded the second-highest individual Test score of the year when he piled up 251 in an innings win over the West Indies in Hamilton. The New Zealand captain had scored a fine 89 (top-score of the innings) helping his side to a massive and decisive first innings lead in the series opener against India in Wellington in February.

It was icing on the cake for Williamson as he edged out Steven Smith and Virat Kohli to move to number 1 in the batsman rankings according to the latest Test Rankings released by the ICC.

Tim Southee with 30 wickets at 17.03 a piece and Kyle Jamieson, who made his debut against India in Wellington in February, with 25 wickets at an average of 14.44, were the standout performers with the ball for New Zealand.

INDIA’S HISTORIC WIN AT THE MCG India’s historic series-levelling win at the MCG was their moment of glory in 2020. After being routed for 36 in the second innings at Adelaide and without four of their top players - Virat Kohli, Rohit Sharma, Mohammed Shami and Ishant Sharma - India, under the brilliant inspirational leadership of Ajinkya Rahane, showed tremendous character and skill to draw level in Melbourne. The fact that India lost the toss and fielded on a pitch where batting first had been a huge advantage over the last five years only added to the credentials of the victory.

No one gave India a chance. Most pundits had announced their series verdict - 4-0 sweep to Australia. History was also not on India’s side. After being bowled out for 42 in the second innings at Lord’s in the summer of 1974, the Ajit Wadekar-led Indian team had been thrashed by an innings and 78 runs in the next Test in Birmingham. Only thrice in the history of Test cricket had any team, anywhere in the world, won the next Test of a series after being bowled out for 50 or less in any innings in the previous Test. Mumbai Indians created more history by lifting the coveted Indian Premier League (IPL) 2020 title for a record fifth time beating Delhi Capitals in the final in Dubai. They had won the trophy in 2013, 2015, 2017 and 2019, thus in a way they broke a trend and pattern and were victorious for a second successive year. 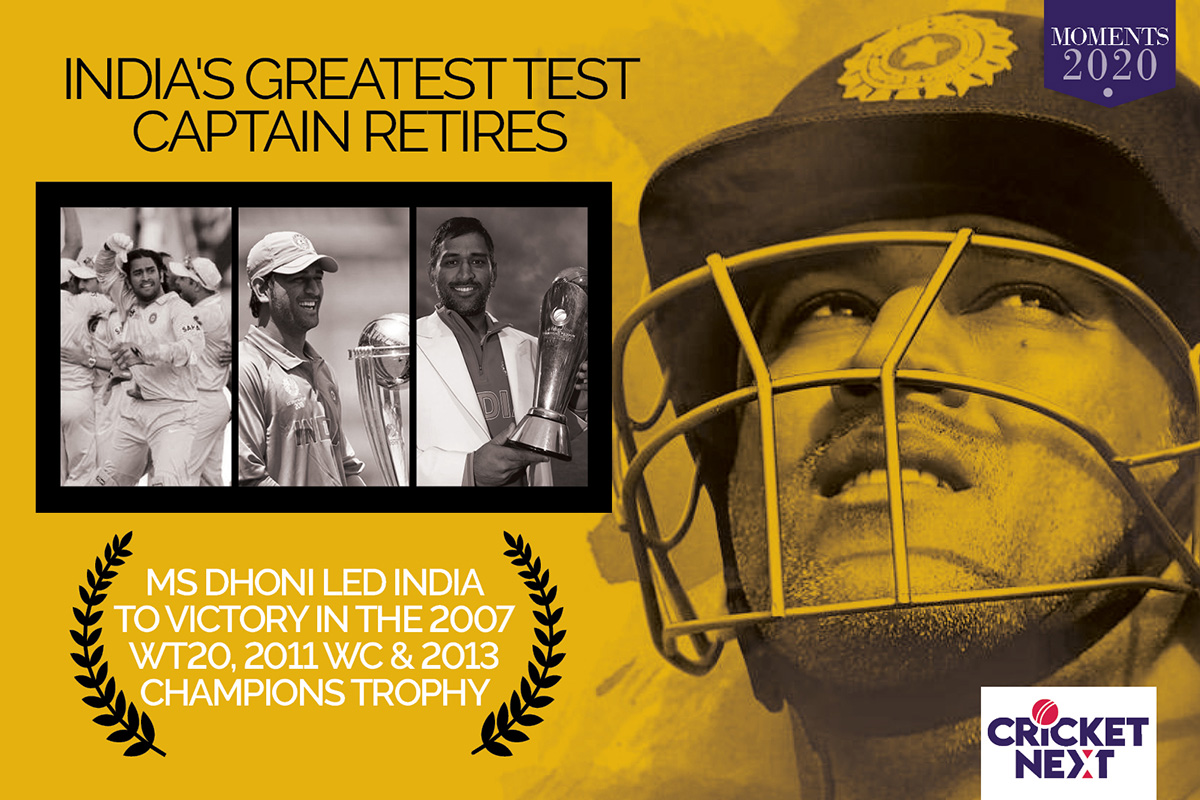 MS Dhoni had been a great of the game – one of the most successful captains of all-time and an all-time legendary ODI batsman and amongst the best with the gloves behind the stumps. Dhoni scored 10773 runs in ODI cricket which remain the 11th highest in the history of the format. Dhoni had an average of 69 in victorious matches and an average of 102.71 in successful chases - the highest in ODI history!

Dhoni was also a very effective Test batsman with an aggregate of 4876 runs in 90 Tests at an average of 38.09 including 6 hundreds. Dhoni, the captain led India to victory in the treble – the 2007 WT20 in South Africa, the 2011 World Cup in India and the 2013 Champions Trophy in England. He also took India to the number 1 ICC Ranking in Test cricket in 2009. James Anderson became the first pacer in the history of Test cricket to reach the milestone of 600 wickets when he saw the back of Azhar Ali on Day 5 of the third and final Test against Pakistan in Southampton on the 25th of August. Overall, he joins the three legendary spinners – Muttiah Muralitharan, Shane Warne and Anil Kumble in the 600-Plus Club. Interestingly, Anderson became the second-quickest in terms of number of balls bowled to reach the milestone. Anderson picked his 600th wicket with his 33,717th delivery, 6 deliveries slower than Muttiah Muralitharan.

Stuart Broad became only the 4th pacer and 7th bowler overall to reach the milestone of 500 Test wickets when he saw the back of Kraigg Brathwaite on Day 5 of the third and deciding Test of the Wisden Trophy at Old Trafford. Broad joins the Elite 500-Club of fast bowlers comprising of greats like fellow teammate, James Anderson, Glenn McGrath and Courtney Walsh.

Tim Southee joined Sir Richard Hadlee and Daniel Vettori and became the third bowler from New Zealand to enter the 300-Club in Test cricket. He achieved the feat when he dismissed Haris Sohail in the second innings of the victorious first Test against Pakistan at Mount Maunganui. Southee reached the landmark in his 76th Test. Virat Kohli became the fastest to 12000 ODI runs during his knock of 63 off 78 deliveries against Australia in the third ODI Canberra in December. Kohli broke another record previously held by the great Sachin Tendulkar. Tendulkar reached the milestone during his 300th innings against Pakistan at the Centurion in South Africa in the 2003 World Cup. The Little Master could not have chosen more grand an occasion to achieve the feat. He scored a match-winning 98 off just 75 deliveries in what was one of the most defining performances of his career.

What is astonishing is that Kohli reached the landmark in just his 242nd innings, 58 innings faster than Tendulkar!

India beat Australia by 6 wickets and two balls to spare in the second T20I at the SCG on the 6th of December to seal the three-match series 2-0 and with it recorded their 10th consecutive win in the format in a completed match- a world record beating Pakistan’s 9 wins on the trot in 2018. India’s previous record was a winning streak of 7 matches which they have done on 3 occasions in their T20I history - from December 2012 against Pakistan in Ahmedabad to the 2014 World T20 semi-final against South Africa in Dhaka, from beating Sri Lanka in Ranchi in February 2016 to their eight-wicket win over Bangladesh in the final of the Asia Cup in March and from their six-wicket win against Bangladesh in Colombo in March 2018 to their eight-wicket win against England in Manchester in July, 2018.

India have won their last 5 bilateral T20I series and are undefeated in their last 7. They were last beaten by Australia at Home in February 2019. They have swept two big away series in this period - against the West Indies in the Caribbean/USA in August 2019 (3-0) before thumping New Zealand 5-0 in January 2020.

ENGLAND WIN THREE TESTS IN A ROW IN SOUTH AFRICA

After being beaten by 107 runs in the Boxing Day opener at Centurion in 2019, England bounced back in fine style registering three consecutive wins in South Africa. England hammered the hosts by 189 runs to level the series in Cape Town. Opener, Dom Sibley recorded a brilliant hundred in the second innings. Centuries from Ollie Pope and Ben Stokes handed the visitors an innings win in Port Elizabeth. Mark Wood returned with 9 for the match as England beat South Africa by a massive 191 runs in the last Test in Johannesburg.

Jermaine Blackwood came out to bat at 100 for 4 and smashed 95 off 154 deliveries to help West Indies chase down the target of 200 and record a rare and famous away win against England (by 4 wickets) at Southampton. It was only the third Test win for the West Indies in England since 2000. Shannon Gabriel was their star with the ball and picked 9 wickets in the match.

Australia beat the best ODI team in the world and the current World Cup winners, 2-1, in a thrilling three-match series in their own backyard in Manchester. Australia won the first ODI by 19 runs before the home team levelled the series with a 24-run win. England posted 302 for 7 in the decider and had reduced Australia to 73 for 5 before a match-changing partnership of 212 between Glenn Maxwell and Alex Carey took the visitors to a stunning three-wicket victory with two balls to spare. Maxwell hammered 108 off 90 deliveries including 7 sixes while Carey smashed 106 off 114 deliveries.