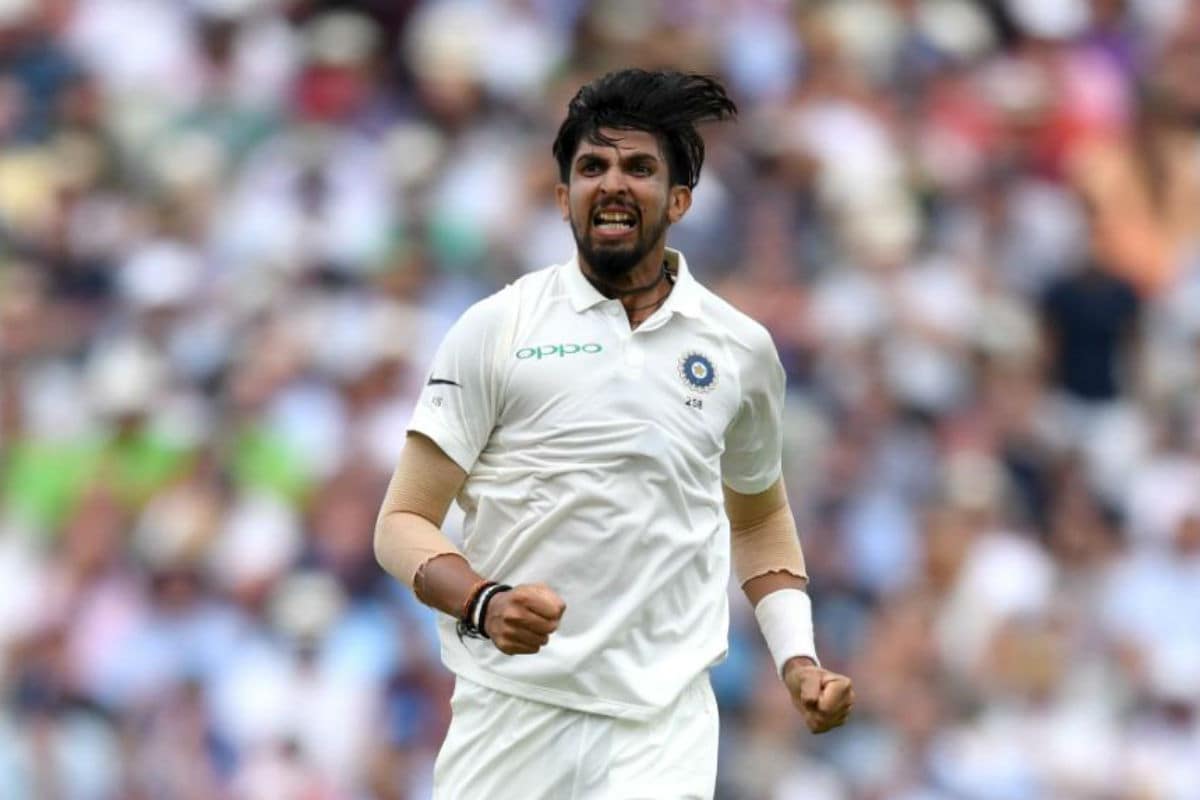 July 17-21, 2014, Lord’s: England were set a target of 319. Ravindra Jadeja gave India the initial breakthrough before Mohammed Shami ended a threatening stand between Alastair Cook and Gary Ballance getting rid of the latter with the team score at 70.

England still had the best of their batting line-up intact. But India had Ishant Sharma! He castled Ian Bell’s off-stump before inducing Cook to nick one to MS Dhoni behind the stumps. Two huge wickets in successive overs – the match had changed on its head!

Joe Root and Moeen Ali led the home team’s fightback with a century partnership and India were desperate for a wicket. Cometh the hour, cometh the Man!

Ishant dug it in short and the ball hit Ali on the gloves and went straight into the hands of short leg – India had the breakthrough with the last ball before Lunch.

But the lanky Indian paceman wasn’t done, yet!

Also Read: BCCI Gets No Bids for Kit and Apparel Sponsorship Despite Lower Base Price - Report

He decimated the England middle-order post Lunch dismissing Matt Prior, Ben Stokes and Root in the space of 7 deliveries. England were now reeling at 201 for 8. It was now a matter of time. Stuart Broad became Ishant’s 7th victim before Jadeja finished off the match effecting the run out of James Anderson.

India had pulled off a famous 95 run victory.

7-74 in 23 overs – Ishant Sharma gave his best bowling performance in Test cricket. He had begun the year with heaps of wickets in Auckland and Wellington.

But this was different. It marked a major transformation in his Test career. A new Ishant Sharma was born! He became a more consistent wicket-taker with his Failure Percentage (Percentage of Matches in which wickets taken less than 3) significantly improving from 47.17% to 34.09% - basically from failing in every second match he failed once in every three matches.

Ishant’s bowling average placed him amongst the bottom three pace bowlers (min. 50 wickets) from his debut (May 2007) till the end of 2013.

Post 2014, he has jumped to number 12 in average amongst the 31 fast bowlers with a minimum of 50 wickets during this period. His average is better than the likes of Vernon Philander, Josh Hazlewood, Kemar Roach, Tim Southee, Trent Boult, Jason Holder and Shannon Gabriel amongst others in this time-frame. BEST PERFORMANCES AND CONTRIBUTION IN WINS

Apart from Lord’s 2014, Ishant gave another fine showing in England when his 5-51 was instrumental in routing the home team for 180 in the second innings of the 2018 series opener in Birmingham.

He was also India’s leading wicket-taker in this series.

Although Cheteshwar Pujara got the Man of the Match, it was Ishant’s spell of 5-54 which gave India a match-winning 100-plus lead in the first innings of the series decider at Colombo (SSC) in 2015.

No fast bowler has taken more wickets in victorious matches for India than Ishant. A little over half (150 of 297) of his wickets have come in wins for his country. This is a testimony of not only his longevity but his brilliant transformation post 2014.

Zaheer Khan comes second on the list with 149 and then there is daylight before the others follow. Interestingly, Ishant’s average in wins for India of 24.61 is better than that of the Zaheer (25.77)!

His average in wins has improved to 21.1 post 2014 and is better than Roach, Woakes, Shami, Southee, Starc and Boult to name a few bigwigs during this period.

His average in SEN in this time-frame is better than Philander, Wagner, Morkel, Boult, Southee and Hazlewood amongst others. 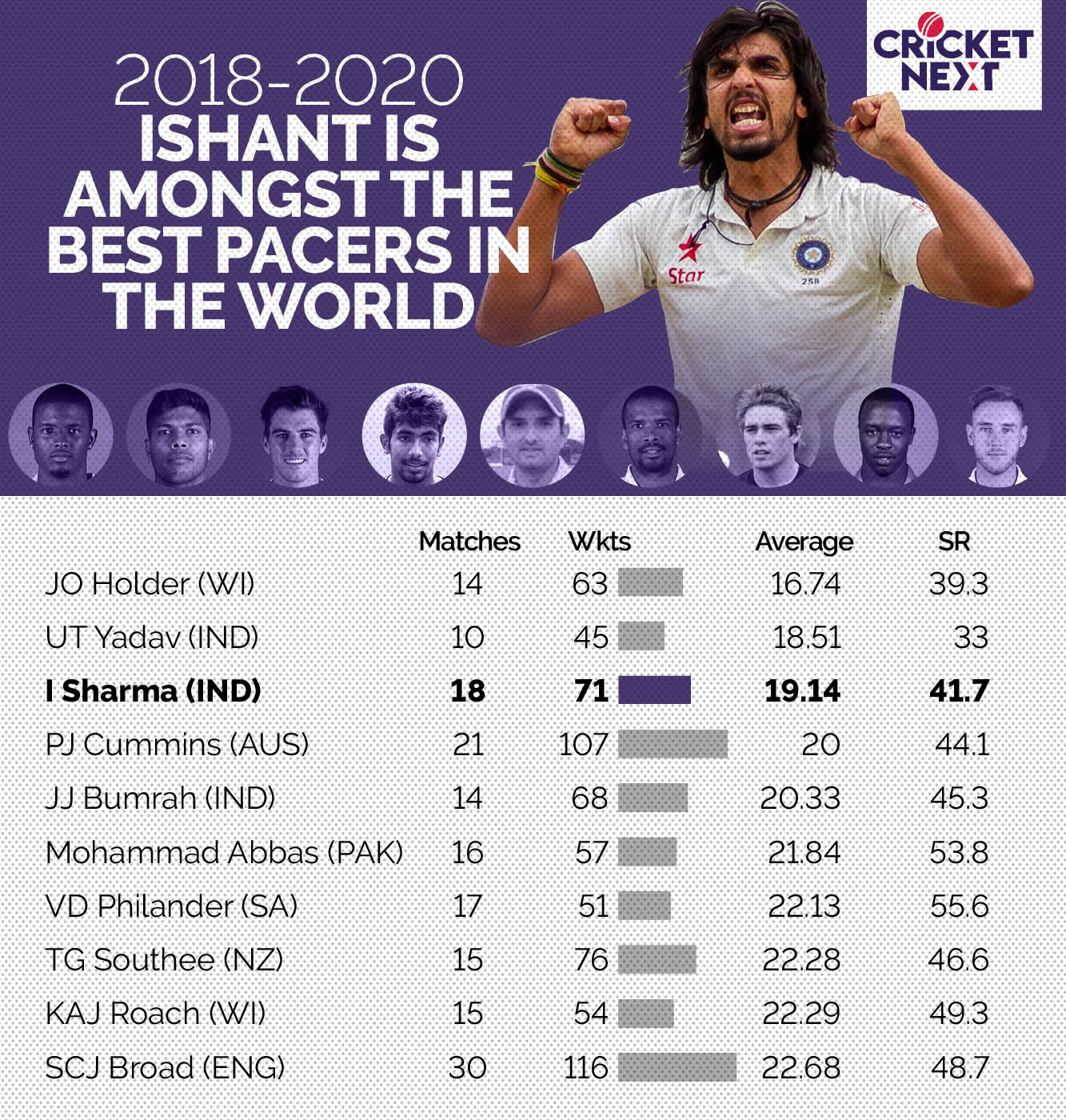 He has better numbers in this period than even the likes of Cummins, Rabada, Anderson and Bumrah!

He has been instrumental in India’s success in Test cricket during the last two and a half years. It has the best win percentage of 58.33% in this time-frame (post 2018).

Ishant’s success during this period can be credited to his variation in line and length and an increase in pace. He is bowling a higher share of his deliveries just outside the off-stump pitching it fuller at a higher speed. Short quick bursts have replaced the long war-horse spells where he predominantly bowled his stock back of length deliveries. Coupled with this he has found a new weapon – the ability to swing the ball.

Most of his critics had written Ishant off after the first half of his career. And scoffed even at the prospect of him playing Test cricket.

Ishant has now represented his country in 97 Tests. Only Kapil Dev has more Test caps amongst pace bowlers for India. More often than not fast bowlers get worn out towards the end of their career, especially when their first half has been average at best. But that was not the case with Ishant. He got better with age and experience and has completely transformed himself into a genuine match-winner for India and a world-class bowler.

This metamorphism has meant that Ishant’s overall average in Test cricket is better than Zaheer Khan, albeit marginally. Yet, while the latter is considered as a great Test bowler for India, Ishant has not quite got his due.

Time to change that as he turns 32 today!