On his 45th birthday, let's take a look at Sachin Tendulkar's top-10 innings: 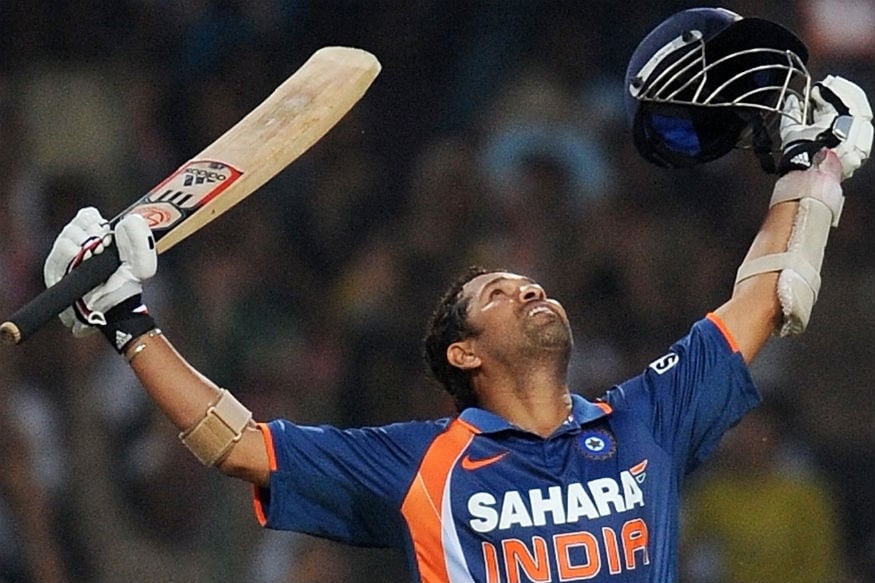 New Delhi: Legendary India cricketer Sachin Tendulkar broke every batting record on his way to greatness during an illustrious career, which spanned over 24 years on the international arena.

Perhaps the most complete batsman to ever grace the game, who remained in his prime longer than most cricketers have a career in the sport. From scoring most runs in the two formats (ODI and Test), the master blaster also holds the record for most centuries in the game. SRT scored an unbelievable combined total of 100 international tons — a milestone which is likely to stay on forever.

On his 45th birthday, let's take a look at Sachin's top-10 innings:

Perhaps Sachin's most iconic century ever and a favorite of many Tendulkar worshippers. The master blaster conjured up a 'boundary storm' on the pitch that even eclipsed the desert storm which interrupted the match for a brief period in Sharjah.

During the sixth match of the tri-nation cup against Australia, India were chasing a score of 285 runs to win, while to seal a place in the final, they needed 254 runs. The chase, however, didn't go as per plan as Sachin was the only batsman to take the fight to the Aussies with wickets falling on the other end at regular intervals.

When India's score read 143/4 in 31 overs, a desert storm stopped the match and when play resumed, India and Sachin's task had become all the more difficult. The revised target to enter the final was 237 runs in 46 overs.

Sachin produced a gem of an innings and after the forced break, he blew away the likes of Share Warne and Damien Fleming to help India seal a place in the final. However, Sachin was not happy with that and started his pursuit of winning the match. He though was dismissed on 143 off just 131 balls by Fleming, then his highest individual score in ODIs.

This was arguably Sachin's greatest ODI innings against arch-rivals Pakistan, which unfortunately was cut-short two runs before a well-deserved century. The group stage match was billed as a clash between India's batsmen and Pakistan's bowlers and it certainly lived up to the hype. Riding on Saeed Anwar's century, Pakistan gave India a target of 274 runs in the designated 50 overs.

Pakistan's pace trio of Wasim Akram, Waqar Younis and Shoaib Akhtar were touted as the most lethal bowling attack in the world at that time and Sachin simply made a mockery of them in Centurion. While other batsmen came and went, Tendulkar bludgeoned twelve fours and one huge six — an upper cut over point off the bowling of Akhtar, which is still remembered by fans very fondly.

Sachin was dismissed on 98 by Shoaib, but his innings ensured India reached closer to the target and Dravid and Yuvraj saw them over the line comfortably in the end.

This match was a perfect example of how Sachin Tendulkar got India close to a historic victory but was failed by his teammates. In the fifth match of the seven-match series against Australia in Hyderabad, India were chasing a mammoth target of 351 runs to win the clash. Sachin held fort at one end, but Australia kept chipping away with wickets on the other as the hosts were reduced to 162/4 at one point.

Half-centurion Suresh Raina finally provided Sachin some support and the master blaster took the fight to the Aussies in spectacular style. Sachin slammed a sensational 175 in 141 balls, an innings which included nineteen fours and four maximums.

When Sachin was dismissed, India needed 17 off 17 deliveries but the lower-order failed to complete the task in hand and India lost the match by 3 runs.

Two days after Sachin single-handedly led India into the final of the competition, the master blaster again slammed a majestic ton as the Men in Blue clinched the Coca Cola cup with a six-wicket win. It was Sachin's birthday and he celebrated it by blowing away the mighty Aussies in the Far East.

Skipper Steve Waugh and Darren Lehmann slammed half-centuries as India were set a target of 273 runs. Chasing the stiff total, opener Sourav Ganguly fell early, but Sachin ensured than India were never out of the chase. The little master was ably supported by skipper Mohammed Azharuddin, who also slammed a half-century.

Sachin's 134 included twelve fours and three towering sixes and it was his destruction of then-best spinner in the world — Shane Warne — which is still fresh in the memories of every Indian cricket fan.

This Test match was legendary Australian captain Steven Waugh's last Test, but Sachin Tendulkar stole his thunder by hitting a majestic 241 in the first innings at the Sydney Cricket Ground. VVS Laxman too notched up an elegant 178, but it was Sachin's dominating double ton that stole all the headlines.

Before this match, Sachin didn't have the best of series according to his own standards, and it was compatriots Rahul Dravid and VVS Laxman who were garnering all the plaudits for their run-scoring exploits.

Sachin took to the crease when India were down to 128/2 on the first day of the Test, and when the visitors were finally dismissed for 705 on the second day, the little master was still standing at the crease unbeaten on 241. Sachin's knock was important because it helped India draw the Test and also end the series at 1-1.

Beating Australia in their own den wasn't an easy task by any stretch of the imagination but Sachin ensured that India achieved the target without much discomfort. In the first final of 2008 CB series, India were set a fighting target of 240 runs in their designated 50 overs at the SCG.

While wickets kept falling at the other end, Sachin played a calculated knock and smashed his maiden ODI century down under when it mattered the most. In the end India won the match comfortably by 6 wickets with 25 balls to spare, while Sachin remained not out on 117.

In the second Test of the three-match series in Cape Town, riding on centuries from Gary Kirsten and Brian Macmillan, South Africa scored 529 run in the first innings. In reply, none of the Indian batsmen could withstand the fierce pace of Allan Donald and Shaun Pollock — barring Sachin Tendulkar and Mohammed Azaharuddin.

The duo slammed their respective centuries but Sachin played a more clam and cautious innings, and made the tail wag a bit to help the visitors cut Proteas' first innings lead. Sachin scored 169 off 254 balls but he was out there in the middle for 329 minutes.

However, it wasn't enough as South Africa again scored big runs in the second innings and Indian batting line-up suffered yet another collapse as the hosts won the match by 282 runs.

The 2004 Multan Test will always be remembered for Virender Sehwag's triple century, but Sachin Tendulkar also played one his finest knocks in the same innings. While Sehwag bulldozed his way to becoming India's first triple centurion in the longest format of the game, Sachin played a more composed innings slammed 194*.

Although, skipper Rahul Dravid declared the Indian innings while Sachin was on the cusp of a double century and the controversy took away some of the sheen away from the innings, his innings, along with Sehwag's record-breaking innings paved way for India's historic innings victory in Multan.

Sachin Tendulkar showed early signs of his greatness during the second Test of the three-match series against England in Manchester in 1990. Coming out to bat at number six in the second innings, the master blaster slammed his maiden Test ton to announce himself on the big stage against a tough opponent.

Even in the first innings, Sachin had scored a half-century and he was only 17 when he took the English bowlers to task in their own backyard.

Sachin's century in the second innings helped India draw the Test and is still regarded as one the best innings that the little master played in his illustrious career.

Commentating of this particular innings by Sachin Tendulkar, Ravi Shastri perfectly summed it up: "First man on the planet to reach 200 ... And it's the superman from India ... Take a bow Master...”

Sachin became the first player in the history of cricket to score a double century in One-Day Internationals. The Little Master reached the magic figure of 200 in the last over of the innings.

In his record-breaking innings, the master blaster scored more than 100 runs from just boundaries (25 fours and 3 sixes).

India went onto notch 401 in their designated 50 overs and comfortably won the match by 153 runs. It was only fitting that the format's first double ton was hit by the format's greatest player ever.