Virender Sehwag birthday: As Sehwag turns 42 on the 20th of October, we look back at a match which defined a quintessential Sehwag-ODI innings. Virender Sehwag was one of the greatest openers in the history of Test cricket. 8586 runs in 104 Tests at an average of 49.34 and stunning strike rate of 82.23 including 23 hundreds and 32 fifties - Sehwag was a revolutionary in the longest format of the game who redefined opening the batting in Test cricket. He scored big runs (including two triple hundreds) at a phenomenal rate - his strike rate of 82.23 is the highest in the history of the format. His Test records are well documented so we shall not re-visit them here.

But as Sehwag turns 42 on the 20th of October, we look back at a match which defined a quintessential Sehwag-ODI innings. The Indian legend never realised his true potential in ODI cricket but still did enough damage and caused enough destruction to boast of a tremendous record, for which he is often not given enough credit. In fact, a lot of pundits dismiss him - by making the blasphemous mistake of judging him just by his batting average of 35.05.

It was the final before the final! India vs Pakistan, 2011, World Cup Semi-Final in Mohali. The who's who of the cricketing fraternity, premiers of the two nations and other top politicians, industrialists, bollywood superstars - everyone was present there to witness this mega event. Umar Gul had been the premier fast bowler not only for Pakistan but overall in the tournament till then. He had picked 14 wickets in 7 matches. His average of 14.5 had been the best amongst all fast bowlers who had picked at least 10 wickets in the tournament. He had also been brilliantly restrictive conceding just 3.86 runs per over and was the only pacer who had an economy rate of less than 4 till then. Gul’s numbers with the new ball were even more outstanding – he gave away just 63 runs in double the number of deliveries bowled (126) at a stunning economy rate of 3 also picking three wickets. He was hit for only 8 boundaries which meant a boundary conceded every 16 balls approximately - basically he was immaculate with his line and length and impossible to get away. Sehwag cover-drives Gul for an exquisite boundary off the third ball of the match. This was a precursor to what was to follow in the pacer's next over. Half volley on leg stump - dismissed for a boundary, another whip through mid-wicket for a four, dot ball, a flick to the square-leg boundary, a ferocious cut through point and a drive through extra cover both again meeting the same result - Sehwag had hammered the best bowler of the tournament for 5 fours in the third over of the match. This initial onslaught was a huge setback for Pakistan shattering their morale and gave India the early momentum in the high octane match. Sehwag was dismissed for just 38 but the striking feature of his innings were the 9 boundaries and the strike rate - he faced just 25 and struck at a rate of 152! India went on to win the match. The rest is history!

This was Sehwag in ODI cricket - getting the quick 30s and 40s giving India the blitzkrieg starts providing the impetus at the start of the innings which in turn rattled the opposition bowlers. It also gave the Indian batsmen to follow the platform to build on a big score. Yes, he could have converted these starts into substantial scores, like he did in Test cricket and attained true greatness in ODIs too but he was human too. What he did achieve was still outstanding and is not given its due. Sehwag scored more than 8000 runs in ODI cricket and maintained an average strike rate of 104.33 for almost 14 years - that in itself is a staggering statistic! It was the second-highest strike rate (min. 2000 runs) during Sehwag's career (April 1999 to January, 2013) only after Shahid Afridi (115.21) but the Pakistani maverick had an average of just 22.93! Just for perspective, Adam Gilchrist had an average of 35.69 and strike rate of 98.72 during this time-frame. The Australian wicket-keeper batsman is considered by many as an ODI cricket. Then why isn't Sehwag? 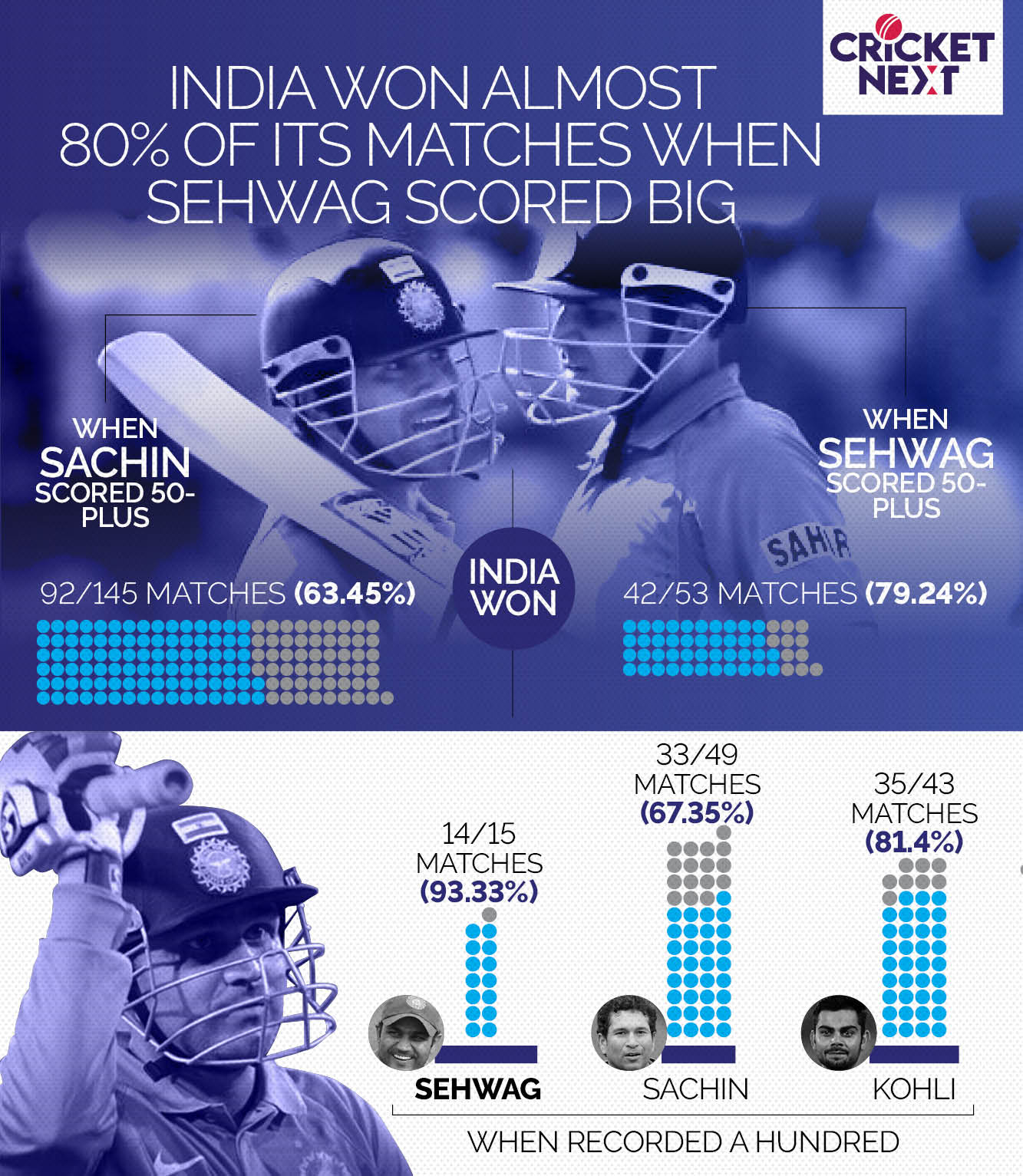 Ironically, India lost when Sehwag, perhaps, registered the finest hundred of his ODI career - against New Zealand in Napier in 2002. He scored 108 off 119 deliveries when other Indian batsmen could hardly get bat onto the ball - the next highest score was 24! India were bowled out for 219.

Coming back to his 20s and 30s and 40s which was quintessential Sehwag - he had 84 scores between 20 and 49, ie a little over a third of his career innings. In a majority 45 of them, he had a strike rate of above 100 - which meant that he had given India a great start when the fielding restrictions were in place. Also, tellingly, India went on to win 48 of these 84 matches (57%). While, of course, other batsmen would have got the big runs in these matches, Sehwag did play a major supporting role - of providing the quickfire starts giving the innings the necessary impetus at the start. Another huge impact he had which cannot be measured is on the psyche of the opposition bowlers - he demoralized them, annihilated them sending them on the backfoot.

While the Nawab of Najafgarh did not achieve in ODI cricket the consistency of the big scores which made him a Test great, his 20s and 30s and 40s (apart from his 50-plus scores), scored at a breathtaking pace, had a huge impact on the game.

He caused enough damage, destruction and mayhem and was a damn good ODI player too!