The movement is primarily led by Tibetan diaspora in different parts of the world and they have got a huge backer in this West Indies legend. 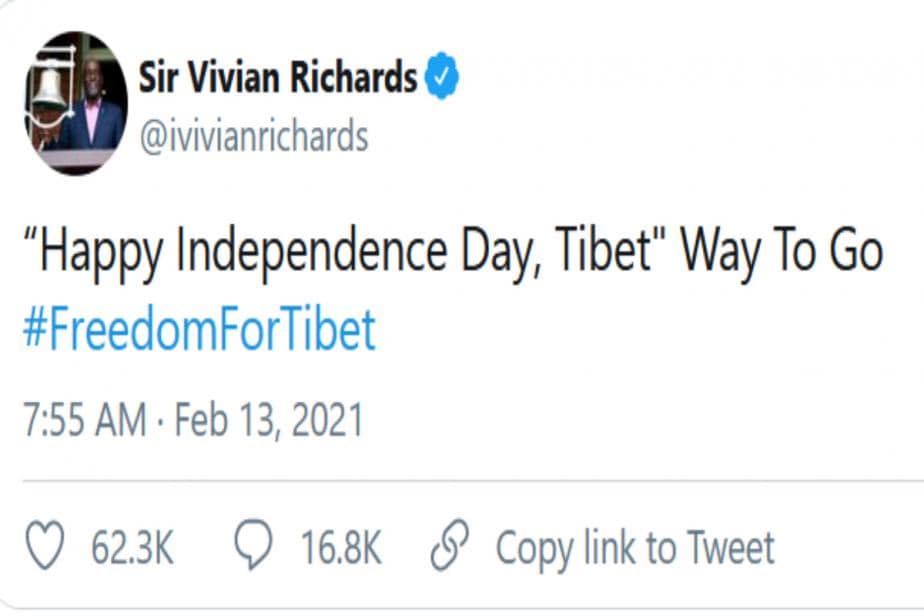 The backers of Tibet's independence movement have often cited history and said their territory had always remained independent. They have also alleged human rights violations and suppression of their political rights by the Chinese.

The Saturday morning tweet by Richards, one of the only five Wisden cricketers of the century, did come as a surprise to many.

Most recently, a US Congressman had written to former US President Donald Trump and implored him to recognise Tibet as an independent nation.

"Tibet was a de-facto independent country until the People's Republic of China chose to illegally occupy the country in 1951. Since then, numerous pieces of legislation passed by the US Congress have indicated Tibet's status as an occupied country," Perry said in his letter.The call for the independence of Tibet and separation from China dates back 6 decades. In March 1959, eight years after the signing of Seventeen Point Agreement, an uprising, which had been brewing for a few years, against the Chinese establishment erupted after many feared the Dalai Lama might be taken to Beijing.

However, the revolt was brutally suppressed by the Communist rule and tens of thousands of people are believed to have died at the hand of the Chinese troops.The Tibetans observe February 13 as their Independence Day, the anniversary of the five-point proclamation issued by the 13th Dalai Lama in 1913.