We look back at the players and numbers which stand out and define the series - from Hardik Pandya's brilliant performances from his new number 6 position to Glenn Maxwell's destructiveness in the lower order for Australia. We also look at some other positives for India which have got strengthened in the series. 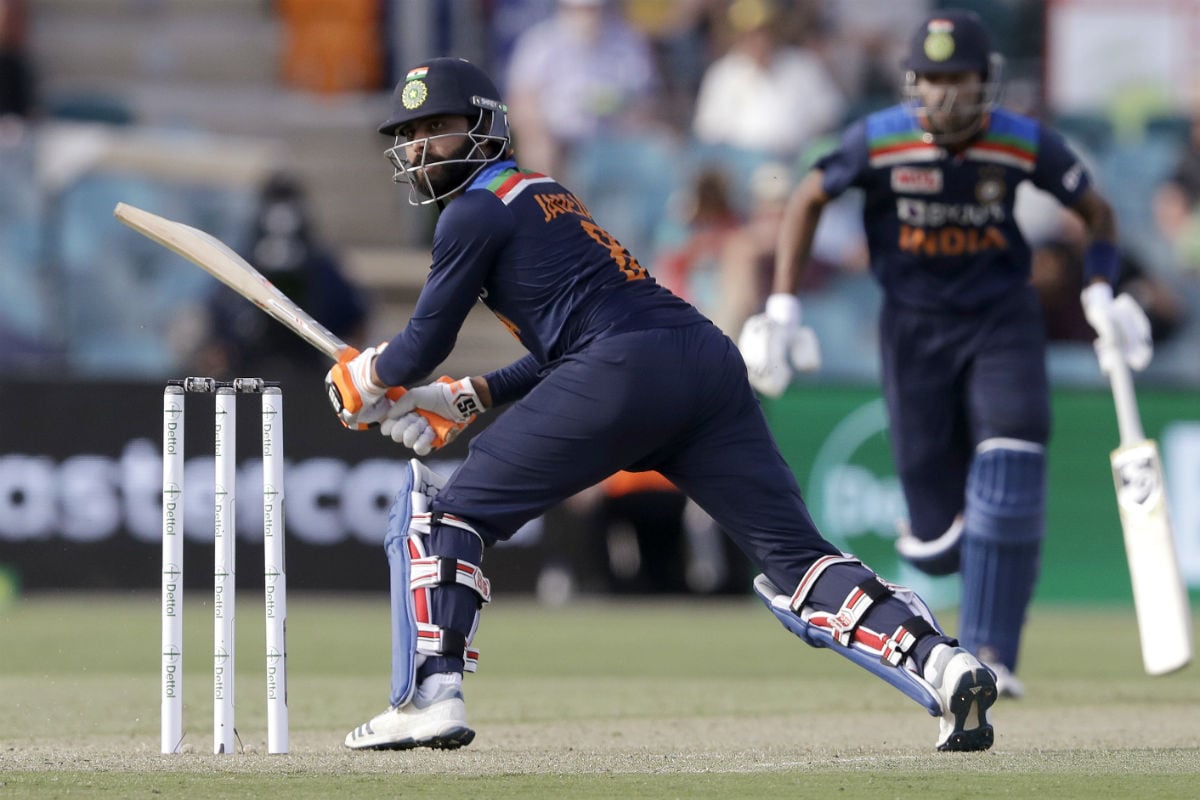 India earned a well-deserved consolation victory over Australia in the third and final ODI at Canberra on Wednesday. It was a rare series loss for India who have been dominant in the format for the last 3-4 years but in slightly indifferent form post the 2019 World Cup. We look back at the players and numbers which stand out and define the series - from Hardik Pandya's brilliant performances from his new number 6 position to Glenn Maxwell's destructiveness in the lower order for Australia. We also look at some other positives for India which have got strengthened in the series. 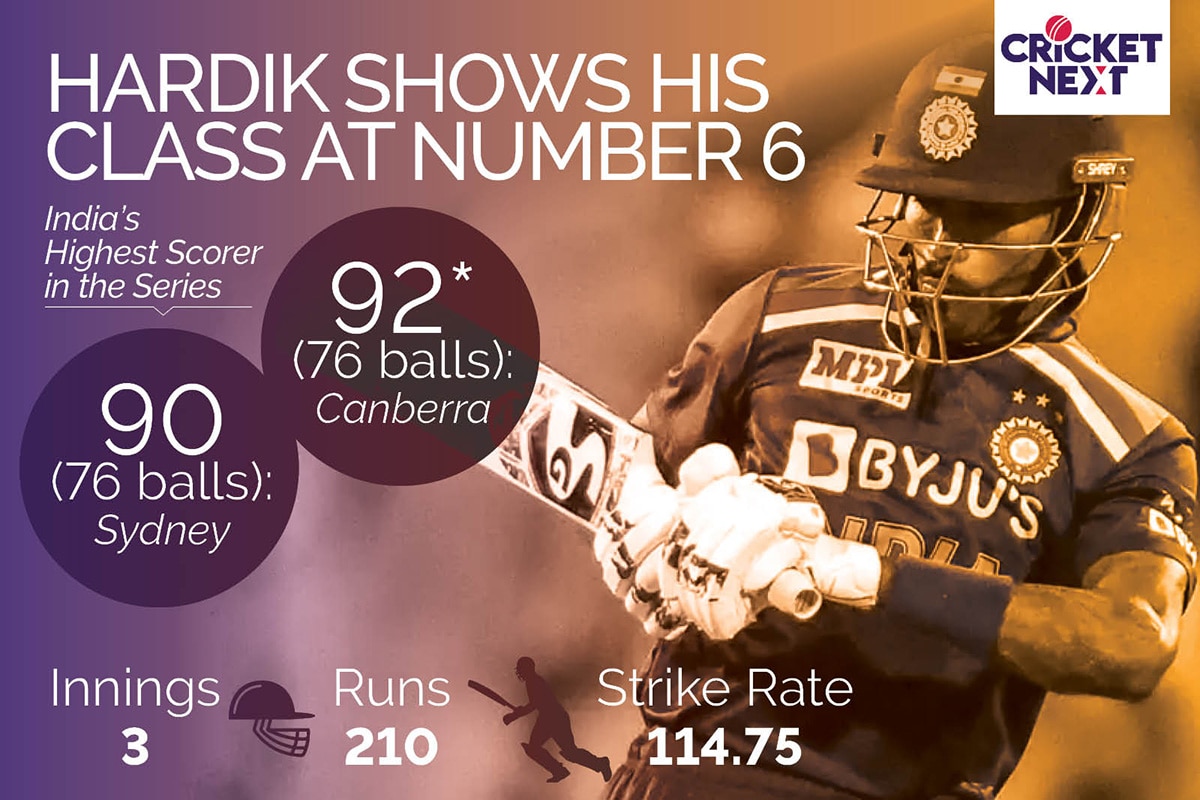 Hardik Pandya was India's best batsman in the series. He recorded his two highest ODI scores in the series - 90 off 76 balls at the SCG and an unbeaten 92 again off 76 deliveries at Canberra. The biggest positive for India was the maturity shown by Pandya batting at Number 6 and not his usually preferred Number 7. Pandya showcased an excellent temperament willing to adjust his attacking game to the situation of the match, build an innings before changing gears and accelerating at the death. He came out to bat under pressure with India 4 wickets down in the opener at Sydney and at Canberra and was involved in hundred-plus partnerships with Dhawan and Jadeja.

Pandya ended as the highest run scorer for India in the series with an aggregate of 210 runs in 3 matches at a strike rate of 114.75.

Ravindra Jadeja had smashed 77 off just 59 deliveries under-pressure almost taking India to victory in the World Cup 2019 semi-final against New Zealand in Manchester in July, 2019. That innings reignited Jadeja - the ODI Batsman and he has constantly played the role of 'finisher' for India from the Number 7/8 position. Since then, Jadeja has aggregated 376 runs in 12 innings (11 from number 7) at an average of 62.66 and strike rate of 106.51.

He has prospered in his new role in other formats too - more recently tasting success as a finisher for CSK in IPL 2020.

Jadeja continued in the same vein against Australia and produced a match-winning unbeaten 66 off just 50 deliveries from number 7 in Canberra.

His current streak matches his 25 innings' hundred-less streak between the Asia Cup in Bangladesh (28th Feb., 2014) to the ODI home series against the West Indies (11th October, 2014).

59: Shreyas Iyer's Aggregate in the series

44.2%: Percentage of Team Runs Scored by Finch and Smith in the series 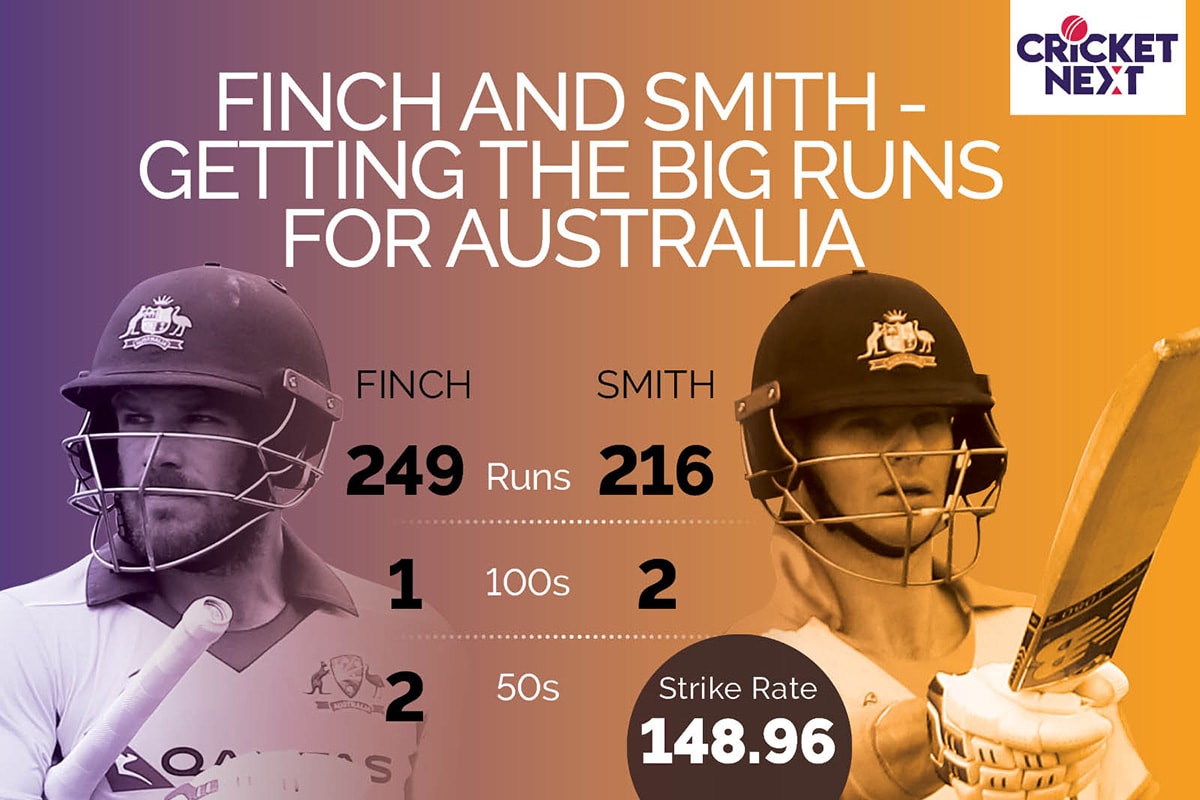 Aaron Finch was the highest scorer of the series with 249 runs including a hundred and two fifties. Steven Smith was the second-highest run-getter with 216 runs at a strike rate of 148.96 including two hundreds.

45 off 19 deliveries, 63 not out off 29 deliveries and 59 off 38 deliveries - Glenn Maxwell was at his destructive best in the series. His strike rate of 194.18 was by far the highest for any batsman in the series. In fact, it is the third-highest strike rate in a bilateral series (min. 100 runs scored and two matches played) only after James Neesham and Abdul Razzaq. 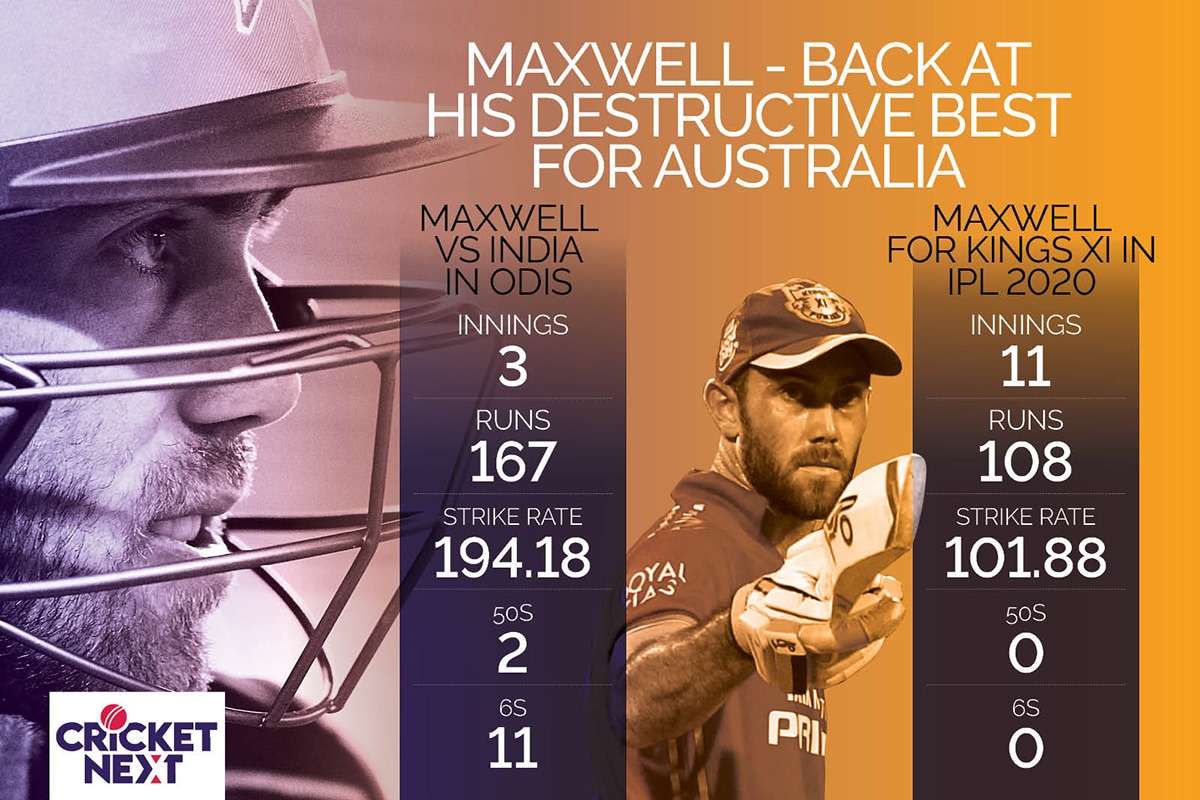 It was an absolutely unbelievable transformation for Maxwell who was in very poor form in the recently concluded IPL 2020 in UAE. He had an aggregate of just 108 runs in 11 innings at an average of 15.42 and strike rate of 101.88 in the coveted T20 domestic competition. Maxwell wasn't able to hit even one six in the entire tournament!

Yuzvendra Chahal bowled 19 overs in 2 matches in the series and conceded 160 runs conceding at a rate of 8.42 runs per over. He went for 89 runs in his 10 overs in the first ODI in Sydney - the most expensive figures of his ODI career (min. 8 overs bowled). He again went for 71 in 9 overs in the second ODI at the same venue - these were the fourth-most expensive figures of his career. One of the major reasons for India's success in ODI cricket over the last few years was Chahal's ability to restrict the opposition batsmen and pick crucial wickets in the middle overs. He failed on both counts in the series as apart from being tonked around for runs he also managed to pick just one wicket in the series.

In complete contrast, were the returns of his Australian counterpart, Adam Zampa. He was the leading wicket-taker of the series with 7 wickets in 3 matches and was very restrictive in the middle overs conceding at a rate of just 5.36 runs per over in a very high-scoring series.

2-1: A Rare Series Loss for India in ODI cricket

It was India's 7th bilateral series loss in 23 series since the 2015 World Cup. They have been dominant in the format winning as many as 16 such series. However, India have now lost 2 consecutive bilateral ODI series (they lost to New Zealand in Feb. 2020) for the first time since being beaten by South Africa and Australia in October 2015-January 2016.

7.03: The Average Run Rate in the Series 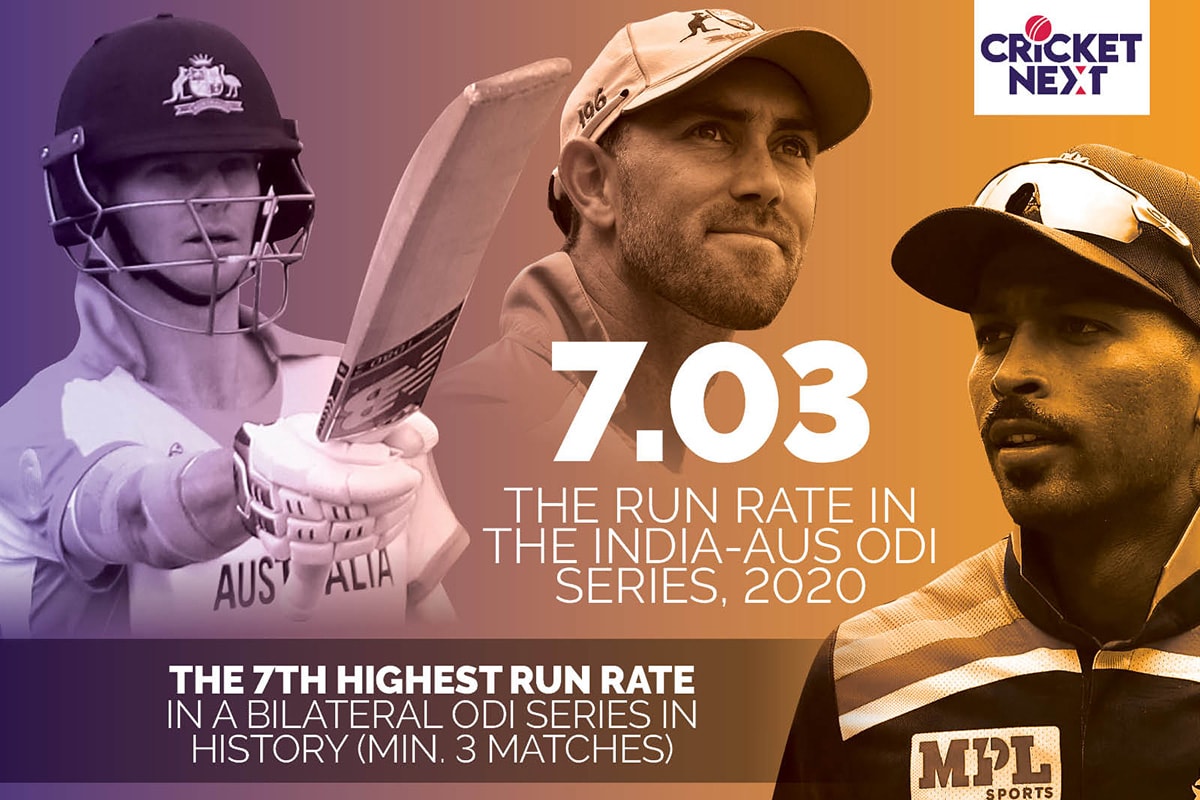 It is the seventh-highest in the history of bilateral ODI series (min. 3 matches in the series). And the second-highest for any series India has been a part of! The average run rate when England toured India in 2017 was 7.1. There were 5 300-plus team totals in a total of 6 innings in the India-Australia series.

Australia has the best win percentage since their win over India in Ranchi on the 8th of March, 2019. They have won 21 of the 31 matches they have played in this period and have a better win percentage than even World Cup winners - England!

This marks a dramatic transformation in their ODI fortunes from the previous two years. Australia had a horrendous run in ODI cricket losing 11 of the 13 matches in 2018. Their win-loss ratio of 0.181 was the lowest amongst all teams in 2018 – even lower than UAE and Zimbabwe! In fact, it was the lowest in Australia’s ODI history for any calendar year. They had not fared much better in 2017 either losing 8 of the 15 matches they had played in the calendar year - it was their fourth-worst performance in a year in history (min. 5 matches).