Follow here the live updates as we build up for the announcement of the Indian men's cricket team squad for the ICC T20 World Cup to be held in UAE.

That's all we have for you tonight. Good night and good bye.

Ashwin, who last played a T20I in 2017, makes a surprise return to the shortest format and the 15-member squad consists of five spinners. The surprise exclusion is that of Yuzvndra Chahal who had a decent in the T20I series in Sri Lanka. leg-spinner Rahul Chahar has earned a spot in the squad after his impressive performances against England and Sri Lanka.

The BCCI has come up with the 15-man squad for the T20 World Cup. Amazingly, they have dropped Yuzvendra Chahal and Shikhar Dhawan from the side. MS Dhoni, the former captain returns as a mentor. Check Full List.

Who will it be?

Most Indian World Cup teams have one wild card entry…will we have one this time too? If yes…who could he be? Varun? Ashwin? Prithvi?? #T20WorldCup

Shami’s fitness status will certainly help captain Virat Kohli and only available coach Vikram Rathour to mull on available options ahead of the fifth game. As of now among the Indian bowlers, Bumrah is way ahead in terms of quantum of overs with 151 of them sent during the seven innings across four Tests which is effectively more than 21 overs per innings.

Veteran India speedster Mohammed Shami has recovered from his niggles and is fit to play the final Test against England in Manchester, starting September 10. Shami and fellow senior pacer Ishant Sharma were rested from the Oval Test that India won by 157 runs to take 2-1 lead in the five-match series as the duo was nursing niggles. It is learnt that Shami had joined the team’s training session on Wednesday, two days before the commencement of the final Test. “Shami is fit. And when Shami is fit, he is an automatic choice," a senior BCCI official privy to the developments, told PTI.

That leaves us with picking the specialist spinners, and Yuzvendra Chahal would be the first name in the team sheet after the Haryana leggie regained bit of his lost form with a decent showing in England and in Sri Lanka. Kuldeep Yadav’s unfortunately downward slide pushes him out of contention even as a reserve or standby player. Rahul Chahar though seems to have got the right backing and the performances to make it to the squad.

Shami’s fitness is a matter of concern after missing in the 4th Test. That brings the focus on the back-ups and leading this will be T Natarajan, Chahar, Mohammad Siraj with Chetan Sakariya having an outside chance.

In the pacer bowling department, Jasprit Bumrah is a certainty alongside Bhuvneshwar Kumar. Kumar returned for the Sri Lanka tour after a lengthy lay-off and looked at ease with the new ball. You put a Mohammad Shami in the mix and that is fast bowling sorted for the first XI one would think.

Among other all-rounders Krunal Pandya, Axar Patel will surely be looked at with at least one of them making it to the squad or as a reserve player. The likely chance is of Krunal as direct cover for Jadeja. Washington Sundar, who has been ruled out with a finger injury from the IPL, could also get a look in as he would be fit by the time T20 World Cup comes around. He may push out either one from Krunal or Axar from the squad if picked.

Also in fray, and ahead of Kishan is Shreyas Iyer. Iyer was injured in March and is yet to play a competitive match and his fitness and form will be up for assessment in the IPL 2021, scheduled to start September 19. But, irrespective of his form, Iyer’s name throw up interesting conundrum. If fully fit he walks into the squad, if not, selectors may think of dropping him and look to bring in an extra all-rounder or a bowler in the squad.

Also in fray, and ahead of Kishan is Shreyas Iyer. Iyer was injured in March and is yet to play a competitive match and his fitness and form will be up for assessment in the IPL 2021, scheduled to start September 19. But, irrespective of his form, Iyer’s name throw up interesting conundrum. If fully fit he walks into the squad, if not, selectors may think of dropping him and look to bring in an extra all-rounder or a bowler in the squad.

In to the middle order, Suryakumar Yadav is more or less certain to keep the No.4 slot in the playing XI and he did himself no harm with good showing in the England T20I in march and then in Sri Lanka in July. Yadav has shown enough enterprising skillset to keep the run-rate up in the middle overs and graft the innings and then accelerate.

India have a ‘world-class’ batting line-up and bowlers will have to be right on the money to avoid being punished, England pacer Mark Wood said on Wednesday ahead of the fifth and final Test here. “I think it’s (India) a world class batting line up. You go throughout the whole line-up and you think, well he is a great player, he is a good player. Rohit Sharma is being brilliant, he is tough to bowl at in any conditions," Wood said at a virtual con-call.

Of them, Dhawan is the one who would be talked about in detail. Even though he was the captain for the limited-overs leg for the tour of Sri Lanka with India’s second-string team, with Kohli expressing his desire to open in T20Is that puts Dhawan’s position in jeopardy with KL Rahul already in the fray as the opener. Dhawan’s finds himself down below the pecking order and rather than have him travel as back-up or in reserve, management may give the Prithvi Shaw a go in the squad, despite not being able to make it count in Sri Lanka. Dhawan was in decent form in Sri Lanka scoring at 28.66 in T20Is and 64.00 in the ODIs.

The latest gossip in town is that Babar Azam might get replaced by Muhammad Rizwan as the Test captain. Looks like someone is not happy with Babar Azam's call regarding #T20WorldCup team selection.

While the likes of Rohit Sharma, Virat Kohli, KL Rahul, Surayakumar Yadav and Rishabh Pant will be in the squad as the core batting unit, the names of Shikhar Dhawan, Shreyas Iyer, Prithvi Shaw, Ishan Kishan, Sanju Samson will be up for debate.

All-rounders Shardul Thakur and Chris Woakes have made big gains in the ICC Test Player Rankings updated on Wednesday. Pacer Jasprit Bumrah also moved a spot up in the bowlers’ rankings after Indias 157-run win in the fourth Test at The Oval on Monday. Thakur scored 57 and 60 in both innings of the Test. The twin half-centuries see him jump 59 places to 79th position in batsmen rankings. He has also moved up seven places to 49th in the bowlers ranking after finishing with three wickets in the match.

Former wicket-keeper Saba Karim picks his T20 World Cup squad: "“I feel you will need experience. Bumrah, Bhuvneshwar Kumar, and Deepak Chahar will be my three pace bowlers and if India feels that they need a left-arm pacer who has the ability to bowl yorkers and slower balls, then T Natarajan.

“Along with that, I have chosen one player between Rahul Chahar and Yuzi Chahal. According to me, Rahul Chahar brings more to the team. His fielding is also quite good and is bowling well although Chahal has also bowled well. If Washington Sundar is not fit, the Indian selectors might start thinking about Varun Chakravarthy,” added Karim.

India to tour England in 2022: ECB has announced today that it will host India for six limited-overs matches in 2022. Here's the full schedule of the tour next year.

India have been placed in Group 2 of T20 World Cup alongside Pakistan, New Zealand, Afghanistan and two qualifiers. The Virat Kohli-led team will start their campaign in a blockbuster clash with Pakistan on October 24. India will play all but one of their four matches at the Dubai International Cricket Stadium. They will take on Afghanistan in Abu Dhabi's Sheikh Zayed Stadium.

In England, the Indian team has reached Old Trafford. 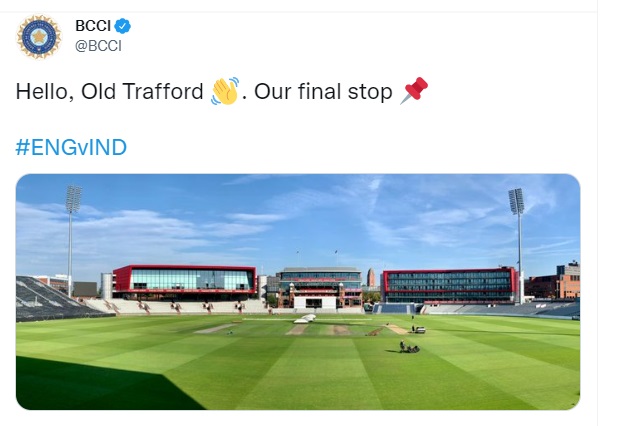 ICC T20 World Cup 2021 India Squad Announcement Live Updates: The BCCI has come up with the 15-man squad for the T20 World Cup. Amazingly, they have dropped Yuzvendra Chahal and Shikhar Dhawan from the side. MS Dhoni, the former captain returns as a mentor. Check Full List.

It is expected that the Chetan Sharma-led selection committee will meet at the BCCI headquarters in Mumbai and link up with skipper Virat Kohli in Manchester and coach Ravi Shastri in London either today.

BCCI President Sourav Ganguly and secretary Jay Shah (convenor of selection committee) are also expected to be a part of the most important selection by the committee.

While most of the teams are announcing 15-member squads, the BCCI is expected to announce either an 18 or 20 member squad as the ICC will allow a squad strength of 30, instead of 23 in earlier editions, amid the COVID-19 pandemic. The number is inclusive of the support staff.

Any team can have more than 30-member squads but the extra cost is supposed to be borne by the country’s cricket board.

The Indian white ball team will have at least 13 to 15 members, who are automatic selections but there are a few spots for which there would be some discussions.

Yuzvendra Chahal and Ravindra Jadeja are two spinners who are all but sure of their slots and it could well be a toss up between Chakravarthy, who has had good IPL runs and Rahul, who impressed in the recent tour of Sri Lanka.

With Rishabh Pant and KL Rahul both capable of donning the big gloves, Ishan Kishan, with some good performances for India in the recent tour of Sri Lanka, is expected to pip the highly-rated-but-under-performing Sanju Samson.

With Hardik Pandya not bowling his full quota of four overs, Shardul Thakur might be required after his new-found batting prowess.

Suryakumar Yadav can be called a certainty while Shreyas Iyer will get his rightful place back in the squad.

For the extra opener’s slot after Rohit Sharma and Rahul, Shikhar Dhawan, with good back-to-back IPLs, and an in-form Prithvi Shaw will be locking horns. But in case of a 20 member squad, both might get a look-in.

In the fast bowling department, Jasprit Bumrah, Bhuvneshwar Kumar and Mohammed Shami (if fully fit) are automatic selections but Deepak Chahar and the red-hot Mohammed Siraj are also in contention.

Washington Sundar’s injury, which has ruled him out of IPL, also means that if he is picked, it will be without any match practice. Among left-arm pacers, Chetan Sakariya and T Natarajan are there but the latter has hardly played anything while the former may accompany the the team as a net bowler.