We analyse the standout players in the remaining six editions of the World Cup – from 1996 to 2015.

The West Indies’ domination in cricket ended in 1995 and they were replaced by Australia who were at the helm for the next 12 years. Sanath Jayasuriya produced 4 match-winning performances in the 1996 World Cup – two with the bat, one with the ball and one all-round.

He blasted a 76-ball 79 opening the innings and helped Sri Lanka chase down India’s 271 in Delhi. Jayasuriya got off to a rollicking start and along with Romesh Kaluwitharana smashed 42 off the first three overs. Although he was dismissed with the team score at 137, he had set the platform for a comfortable chase smashing 9 fours and 2 sixes in his innings.

He smashed a 27-ball 44 and put together an 83-run opening stand with Kaluwitharana against Kenya in Kandy as Sri Lanka posted 398 for 5 – the highest ODI total ever registered till then.

Jayasuriya’s finest performance came against England in the quarter-final in Faisalabad. He picked the wickets of the two highest scorers of the England innings – Phil DeFreitas and Dermot Reeve and then hammered 82 off just 44 deliveries (13 fours and three sixes - 85.37% of the runs came in boundaries) making a mockery of the chase as Sri Lanka romped home with more than 9 overs to spare.

His biggest scalp of the tournament was the wicket of Sachin Tendulkar in the semi-final at Eden Gardens derailing India’s chase and triggering an infamous collapse – India, chasing 251, went crashing down from 98 for 1 to 120 for 8 when the match was awarded to them courtesy the bad behavior of the Calcutta crowd. Jayasuriya also got the wickets of Sanjay Manjrekar and Ajay Jadeja and returned 3-12 in 7 overs.

He aggregated 221 runs in 6 innings but what stood out was his strike rate of 131.54 – by far the highest in the tournament (min. 100 runs). The impetus he gave the innings at the start laid the platform for the likes of Aravinda de Silva, Asanka Gurusinha and Arjuna Ranatunga amongst others to post big totals and chase down targets with relative ease.

He also picked 7 wickets at 33 apiece. Lance Klusener was in devastating form giving match-winning performances with the bat and ball throughout the 1999 World Cup. He was brilliantly consistent and did not fail in even one of the 9 matches he played in the tournament.

He picked the wickets of Sachin Tendulkar, Rahul Dravid and Mohammad Azharuddin restricting India to 253 in Brighton which South Africa chased down comfortably.

Coming in to bat at 115 for 7 against Sri Lanka at Northampton, Klusener hammered an unbeaten 52 in just 45 deliveries (the highest score of the match) to help South Africa post 199 for 9. He then polished off the Sri Lankan tail picking three wickets bundling them out for 110.

A 40-ball 48 from Number 7 against England at The Oval was followed by a fifer against Kenya at Amstelveen.

Klusener then smashed an unbeaten match-winning 46 off 41 deliveries (from 135 for 6) and helped South Africa chase down Pakistan’s 220 at Nottingham.

He again remained unbeaten on 31 off just 16 deliveries in the tied semi-final against Australia in Birmingham. Klusener kept producing match-winning cameos from difficult situations in the lower middle-order – this ability to score tough runs consistently at a phenomenally high strike rate (122.17 – the second-highest after Tom Moody; min. 100 runs) made him stand out in the tournament.

Klusener was the joint-fourth highest wicket-taker of the tournament with 17 wickets at 20.58 apiece at a phenomenal bowling strike rate of 26.7.

Sachin Tendulkar amassed a colossal 673 runs in just 11 innings at an incredible average of 61.18 and strike rate of 89.25 in the first World Cup hosted by the African continent.

It is the highest aggregate for any batsman in any World Cup – such was the domination of the little man in the tournament.

Tendulkar was incredibly consistent as he registered 7 fifty-plus scores (6 fifties and one hundred) in the tournament. After Man of the Match performances against Zimbabwe (81 in 91 balls) and Namibia (152 in 151 balls), Tendulkar produced his finest innings of the tournament against Pakistan at Centurion. Chasing Pakistan’s 273, he gave India a rollicking start racing to 53 in 5.3 overs before Virender Sehwag was dismissed. Tendulkar stitched together a 102 run third-wicket stand with Mohammad Kaif and had scored 98 (off just 77 deliveries) – more than half of India’s total runs - when he was dismissed with the team score at 177 in the 28th over. India coasted to victory with 6 wickets to spare in the 46th over.

He registered two more fifties – 97 against Sri Lanka in Johannesburg and 83 against Kenya in Durban in the semi-final.

Glenn McGrath was lethal with the ball in the Caribbean in 2007 picking 26 wickets in just 11 innings. Not only was he the highest wicket-taker but also had the best bowling average (13.73) and strike rate (18.6) in the tournament.

He was phenomenally consistent and picked at least one wicket in each of the 11 matches he played in the tournament.

He picked a three-wicket haul on as many as 6 occasions – showcasing his incredible wicket-taking prowess in the tournament.

After a fine performance against West Indies in North Sound (3-31 in 8 overs) which included the wickets of Chris Gayle, Marlon Samuels and Dwayne Bravo, he tormented the Bangladesh top-order in a rain-reduced encounter at the same venue returning with 3-16 in 5 overs.

McGrath gave another Man of the Match performance in the semi-final at Gros Islet where he broke the backbone of the South African top and middle order and saw the back of Jacques Kallis, Ashwell Prince and Mark Boucher in quick succession leaving them in tatters at 27 for 5. South Africa could never really recover and were bowled out for 149. Australia won by 7 wickets. 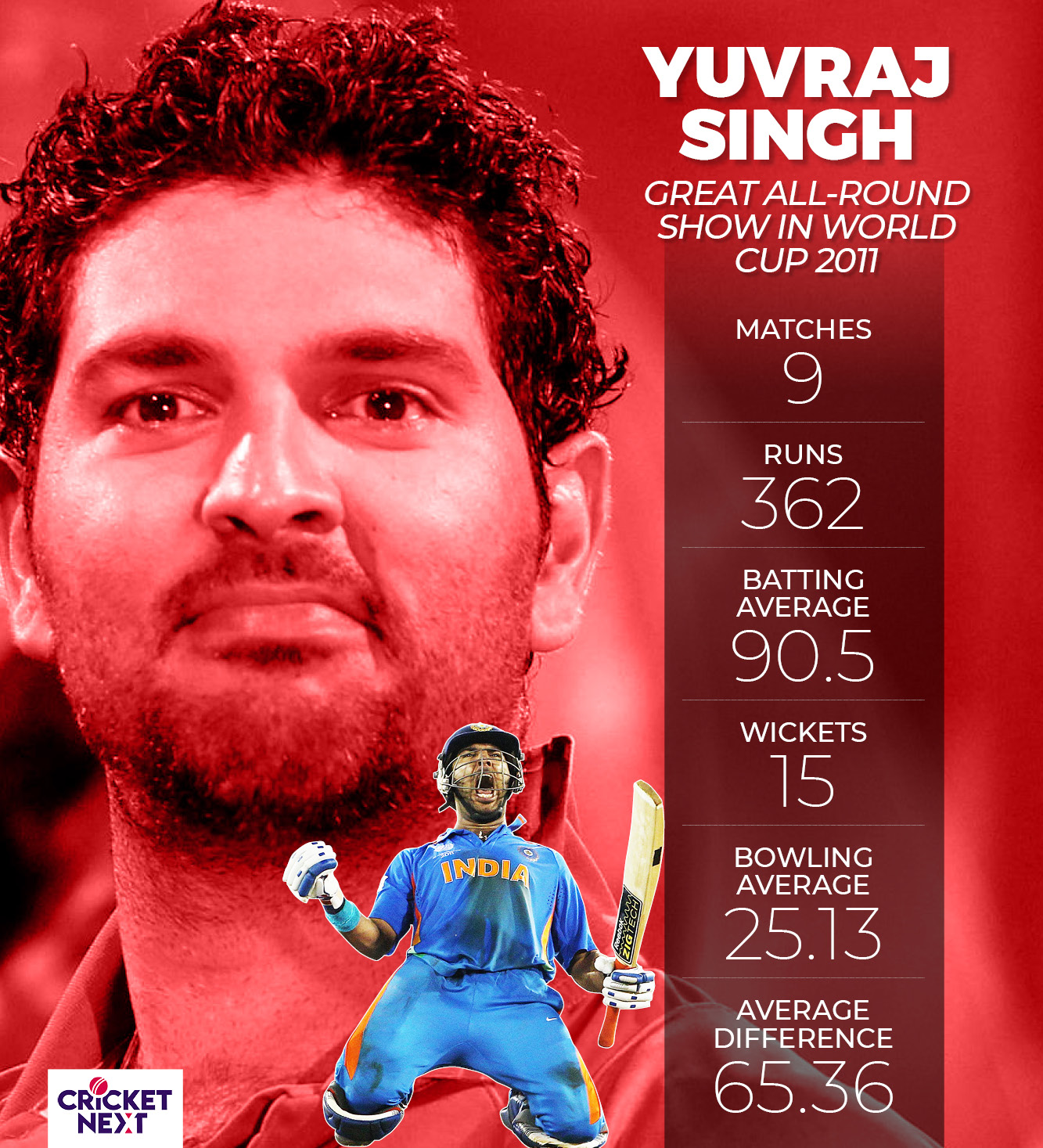 He scored in crunch situations and also gave India crucial breakthroughs at critical junctures throughout the tournament.

His ability to score quickly forging vital partnerships in the middle-order especially while chasing stood out in the tournament.

He picked important opposition wickets in quick succession and was relentless in building pressure from one end.

58 in 50 balls in the tied match against England in Bangalore was followed by a match-winning 5-31 against Ireland at the same venue.

His finest all-round performance came against the West Indies in Chennai when he scored 113 in 123 balls (from 51 for 2) and then returned with 2-18 in 4 overs.

Yuvraj saw the back of Brad Haddin and Michael Clarke and was the most restrictive Indian bowler giving away just 44 runs in his 10 overs in the quarter-final in Ahmedabad. He then steered India into the semi-final with an

In the high octane semi-final against Pakistan at Mohali, he dismissed Asad Shafiq and Younis Khan in successive overs reducing Pakistan from 103 for 2 to 106 for 4 (chasing 260) changing the balance of the match in India’s favour.

Yuvraj scored 362 runs in just 8 innings at an average of 90.5 and strike rate of 86.19. He registered one hundred and 4 fifties in the tournament.

He was the joint fourth-highest wicket-taker with 15 wickets at 25.13 apiece at a strike rate of 30.

Mitchell Starc was the joint highest wicket-taker (along with Trent Boult) of the 2015 World Cup Down Under. He picked 22 wickets in just 8 innings at an astonishing average of 10.18 (the best in the tournament) and strike rate of 17.4 (the second-best in the tournament). He was also the most restrictive bowler of the tournament giving away just 3.5 runs per over.

He picked 12 top-middle order wickets (batting positions 1 to 7) and 10 lower-order wickets (8-11) suggesting that he was as lethal with the new ball as at the death.

He did not pick less than two wickets in any match – such was his wicket-taking form with the ball.

Interestingly, his best bowling performance came against New Zealand in Auckland where his 6-28 in 9 overs almost handed Australia a remarkable win defending 151. New Zealand though, scraped through by one wicket.

Starc was the most restrictive bowler in the semi-final against India at the SCG conceding just 28 runs in 8.5 overs and also chipping in with a couple of wickets.

He got the wickets of Brendon McCullum and Luke Ronchi and was again the most economical bowler giving away just 20 runs in his 8 overs in the final against New Zealand at the MCG.

In as many as 8 World Cups, the Player of the Tournament was awarded to/ selected to be from the winning team.