Rangana Herath will make his 93rd and final Test appearance for Sri Lanka when they clash against England in the series-opener at Galle from Tuesday.

Rangana Herath will make his 93rd and final Test appearance for Sri Lanka when they clash against England in the series-opener at Galle from Tuesday. Going into his final Test, Herath has picked 430 wickets at an average of 27.95 and a strike rate of 59.7 in 168 Test bowling innings in his career.

He is amongst the ten-leading wicket takers in Test cricket history.

Only Muralitharan, Warne, Kumble, Anderson, McGrath, Walsh, Kapil Dev, Broad and Hadlee have taken more wickets – that is the elite company Herath is an exclusive member of.

This also means that he is the third-highest wicket taker (after Anderson and Broad) amongst all contemporary bowlers in Test cricket.

Herath needs one wicket to equal Hadlee’s tally. He is three shy of Broad and four of Kapil. He could go down in history as the seventh-highest wicket taker of all-time.

This makes Herath an all-time great of the game. Only the trio of Murali, Warne and Kumble have a higher aggregate of wickets than Herath amongst spinners in Test cricket history.

But here is an interesting fact. Herath has picked 34 more wickets than Warne did after 168 bowling innings (Herath’s career span). Warne had aggregated 396 wickets after 168 innings. Herath has 430. 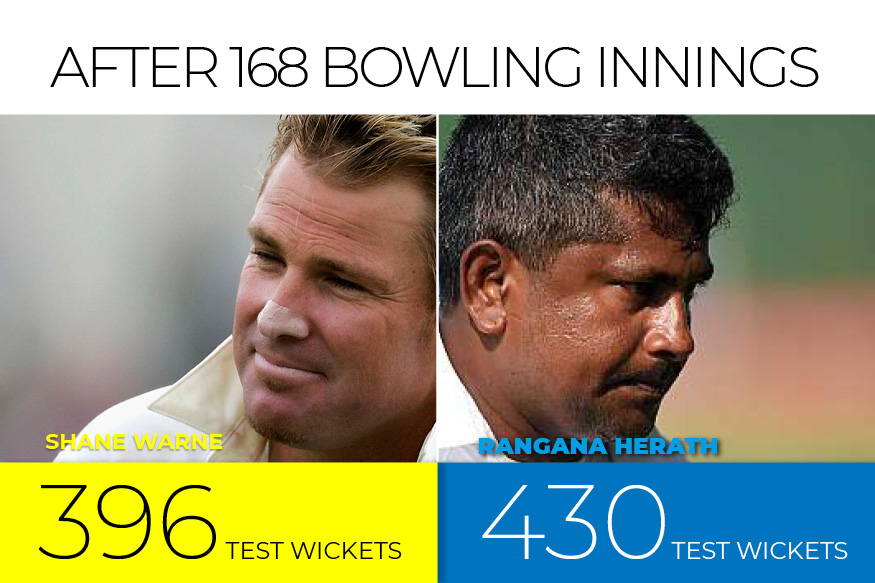 His Bowling Average of 27.95 places him at number 10 amongst all spinners who have played at least 40 Tests and taken a minimum of 100 wickets.

This means that Herath has conceded lesser runs per dismissal and bowled lesser balls per wicket than the likes of Kumble, Swann, Saqlain, Qadir, Harbhajan, Prasanna, Bedi to name some all-time great spinners. And this is no mean achievement!

His strike rate of 43.3 in winning matches is the second-best only after Muralitharan (42.7) for all spinners who have picked at least 100 wickets in their teams’ victories.

This suggests that Herath was more crucial to Sri Lanka’s success than Ashwin was for India or Warne was for Australia. While Ashwin has had Jadeja and an impressive fast bowling unit for support, Warne had a pace battery comprising of McDermott, McGrath, Gillespie and MacGill who shared the success.

Herath was not a regular in the side for most of the 2000s. He only came onto his own after the retirement of Vaas (2009) and Muralitharan (2010). And after that he was a lone ranger who kept Sri Lanka afloat. Herath played just 22 Tests (out of a potential 102 for Sri Lanka) from his debut in 1999 till Murali’s retirement in July 2010. He played in the shadow of Murali and Vaas and was often dropped from the side. He played 15 Tests with Muralitharan and picked just 39 wickets at an average of 45.46 and a strike rate of 88.9.

Herath’s elevation as Sri Lanka’s leading bowler post Murali’s retirement transformed his career. From a support bowler he became a match-winner. This responsibility and leadership brought out the best in him. Remarkably from the age of 32.

Only James Anderson (399) has taken more wickets in Test cricket than Herath during this period. No bowler has more 10-wicket and 5-wicket in an innings hauls than the Sri Lankan spinner in this time-frame.

Herath’s propensity to pick top/middle order wickets, ability to restrict opposition batsmen, break significant partnerships and build pressure by taking two or more quick wickets have been amongst the best in the world in this time-frame.

He also added another quality to his bowling during this period – the ability to perform in the big matches – the matches against the toughest opposition and matches which ultimately decided the fate of a series.

This was the only result Test of the three-Test series

Sri Lanka faced a stiff challenge from Australia – the highest ranked Test side in the world. They had beaten the hosts on their last tour in 2011.

Sri Lanka beat the best side in the world 3-0.

Herath ended the series with the maximum number of wickets – 28.

Herath has a phenomenal record at home. He has picked 275 wickets in 48 Tests at an average of 23.41 in Sri Lanka. Only six spinners in Test history (min. 80 wickets) have a better bowling average at home – Laker, Lock, Muralitharan, Jadeja, Verity and Ashwin.

What is astonishing is this - Herath bowled the same number of balls for a wicket in Sri Lanka as Muralitharan (50.8)!

This means that Herath was individually, a greater bowler in Sri Lanka than Kumble, Harbhajan or Bedi were in India or Warne was in Australia.

Only Muralitharan has taken more fifers (for a spinner) at home (45) than Herath (26).

Herath has picked seven 10-wicket hauls in Sri Lanka in 90 innings – the joint-second highest with Kumble (7 but in 115 innings). Sri Lanka had the second-best win-loss ratio in Test cricket from July 2005 to July 2010. Post Murali’s retirement and subsequently of Dilshan, Jayawardene and Sangakkara, they have gone down dramatically and are struggling at number 7. Post July 2010, Sri Lanka has played 81 Tests, won 27 and lost 32.

But the poor overall performance of the team has not affected Herath. In fact, he has accepted the challenge and risen to the occasion. He has been the pivot around which the Sri Lankan team has revolved in this period. Whatever little success they have had in the last eight years, has largely been due to the efforts of Herath.

He was the leading wicket taker with 16 wickets in the home series against Australia in 2011.

He was again, the leading wicket-taker against England and New Zealand at home in 2012.

He played a crucial role with the ball in Sri Lanka’s maiden series win in England in 2014 (1998 was a one-off Test win).

He was the leading wicket-taker in the home series against Australia in 2016. Sri Lanka beat the number one Test side 3-0.

Herath again had the highest tally of wickets and the best average in the 2-0 sweep against Pakistan in UAE in 2017.

He was Sri Lanka’s second-highest wicket-taker in their 2-0 thumping of South Africa at home in 2018.

It is not surprising then that ten of his eleven Man of the Match Awards have come in this period (post July 2010).

Against all odds, Herath has kept at it, performing day in and day out, maintained high standards and competed with the best in the world. And often out-numbered them.

Sri Lanka has shown signs of resurgence with a talented bunch of youngsters in the last couple of years. Herath’s phenomenal success in this transformative period for Sri Lanka has been his real legacy to Sri Lankan cricket.

Eight years ago, a great Sri Lankan spinner bid farewell in a series-opener at Galle.