Back to News18
Home » Cricket Home » News » In Numbers: India's Pace Unit in a League of All-Time Great Attacks

In Numbers: India's Pace Unit in a League of All-Time Great Attacks

India's pace quartet is performing at a significantly high level, and has managed to carve out its niche in the history of cricket.

Since we live in an age of sensationalism, let me start this piece with a sensational stat:

India’s combined Test fast bowling average of 15.16 in 2019 was the best for any team in any calendar year(min. 3 matches in the year) in 67 years!

Wait, there is more.

India’s combined Test fast bowling strike rate of 31 in 2019 was the best for any team in any calendar year (min. 3 matches in the year) in Test cricket history only after England in 1888 (27.7).

Yes – that is how good the likes of Jasprit Bumrah, Mohammed Shami, Ishant Sharma and Umesh Yadav have been in 2019.

They have combined to take 95 wickets in just 8 Tests this year – that is a percentage contribution of 65.52% of the total wickets taken by Indian bowlers in the year. This is a stunning achievement given that 5 of the 8 Tests India played in 2019 were at home. 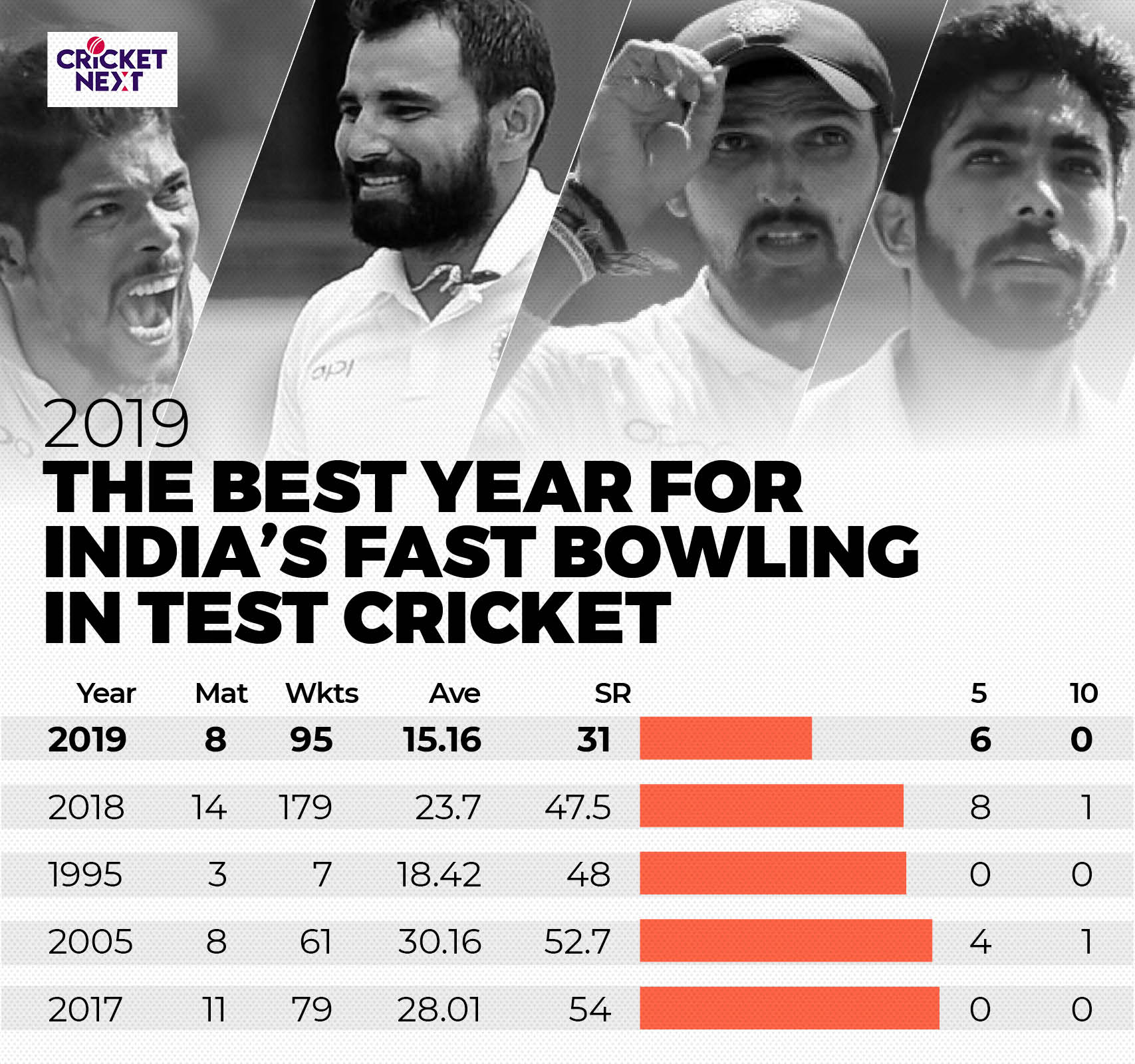 The Indian pace trio of Shami, Yadav and Ishant combined to take 61.46% (59 of 96 wickets) of the total wickets taken by Indian bowlers in the home season this year – a phenomenal achievement given that India’s premier fast bowler –Bumrah did not take part in any of these 5 Tests.

India won the historic Pink-Ball Kolkata Test against Bangladesh with no contribution from their spinners with the pacers picking all the 19 opposition wickets to fall – their first home-Test win without a single wicket from their spinners and the second overall (after Johannesburg, 2018).

Bumrah tops the average charts for fast bowlers in 2019 (min. 10 wickets) conceding 13.14 runs per dismissal. The stunning fact is the Indian pace quartet occupies four of the top five positions on this count and all average below 20.

Yadav has been the most lethal wicket-taker for India this year as his strike rate of 23.1 indicates – the best in the world for a fast bowler.

Such has been the dominance of the Indian pace attack in 2019 that their Australian counterparts – the next-best on both parameters of average and strike rate – are a distant second (average of 22.49 and strike rate of 46.6).

Although 2019 has been a record-breaking year, the Indian pace brigade has been consistently outstanding in the last few years. They have tasted phenomenal success between 2017-2019 – these three years being amongst their best five in history in terms of strike rate.

India has played 10 Test series (two or more matches) since 2017 winning 8. The pace bowlers have averaged less than 25 and struck at under 50 balls per wicket in 7 of these series – that is how good they have been in this period.

Four of the best five series’ performances by Indian fast bowlers (in terms of average) have come in the last couple of years.

The transformation of the Indian bowling unit and the formation of a world class pace attack has coincided with Virat Kohli’s captaincy.

The Rise of The Pace Attack Under Kohli

Kohli took over as India’s Test captain in December, 2014 in difficult circumstances on their tour Down Under after which the team was languishing at number 7 in the ICC Rankings.

Five years down the line and India are comfortably perched at the top of the table.

One of the main reasons for India’s remarkable transformation and success under Kohli has been the performance of the pace bowlers under his tenure. 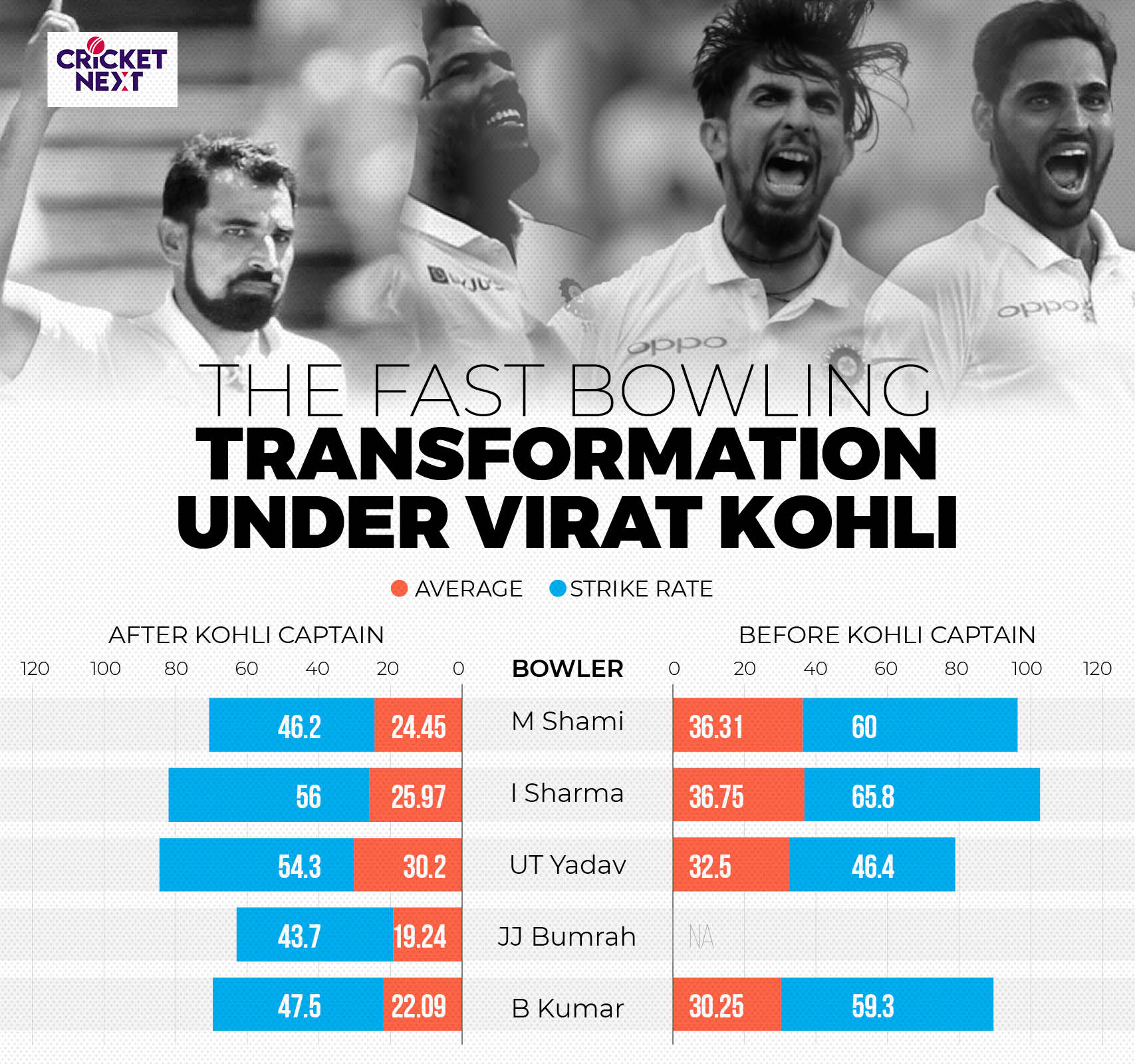 Overall, the five Indian pacers have combined to take 453 Test wickets in 53 Tests under Kohli.

The combined strike rate of the Indian pacers under Kohli of 50.6 is the second-best in the history of Test cricket (min. 40 Tests as captain) only after Viv Richards.

The combined average of 25.81 is the fifth-best amongst the 27 captains (who have captained in 40 Tests) after Richards, Peter May, Hansie Cronje and Clive Lloyd.

THE MOST LETHAL PACE QUARTET OF ALL-TIME?

If we compare Kohli’s quartet (the best four bowlers under his captaincy in terms of wickets taken) of Bumrah, Yadav, Ishant and Shami to some of the all-time great fast bowling quartets under different captains, it is mind boggling that their combined strike rate of 50.28 turns out to be the best!

Yes, there are other parameters to judge the quality of a pace bowling attack such as quality of wickets, wickets with new ball, top-order wickets and pace and level of threat and intimidation but for the current Indian quartet under Kohli to even outdo some of the all-time great attacks on bowling strike rate is a phenomenal achievement.

Given the arsenal at his disposal and his ability to extract the best from them, it is not surprising that Kohli has the third-best win-loss ratio (min. 40 Tests as captain) in Test cricket history (of 3.3 having won 33 of the 53 Tests he has captained, losing just 10) only after Steve Waugh (4.55) and Viv Richards (3.375).

Just for perspective it is better than the likes of Lloyd and Ponting (3 each).

Gone are the days when spin dominated for India.

Gone are the days when a lone ranger took up the fast bowling mettle for India.

It is now a pack of trained wolves hunting together!