India's Shubman Gill celebrates after scoring a half-century (50 runs) during the second day of the third cricket Test match between Australia and India at the Sydney Cricket Ground (SCG) in Sydney on January 8, 2021. (Photo by Saeed KHAN / AFP) / -- IMAGE RESTRICTED TO EDITORIAL USE - STRICTLY NO COMMERCIAL USE --

India beat Australia in a thriller at The Gabba to breach the Australian fortress after 32 years and with it recorded their second successive series win against the formidable opponents in their own backyard. From the horror of 36 all-out to Rahane's hundred at the MCG, from Mohammed Siraj's fifer to Rishabh Pant's counter-attacking fifties - India's greatest series win in their Test history was defined by some stand-out numbers.

India beat Australia in a thriller at The Gabba to breach the Australian fortress after 32 years and with it recorded their second successive series win against the formidable opponents in their own backyard. From the horror of 36 all-out to Rahane’s hundred at the MCG, from Mohammed Siraj’s fifer to Rishabh Pant’s counter-attacking fifties – India’s greatest series win in their Test history was defined by some stand-out numbers.

We look at 10 interesting numbers from the series.

2: India Recorded Their Second Series Triumph in Australia on as many tours India beat Australia 2-1 in the Border Gavaskar Trophy in 2018-19. It was their first series win Down Under in 12 attempts. However, that was a full strength Indian team facing an Australian team sans David Warner and Steven Smith.

A depleted, injured and bruised and mentally exhausted Indian team without several of their top players beat a full strength Australian team, again 2-1, in 2020-21. This was, by some distance, the greater of the two victories for India. In fact, given all that transpired before and during the series, this was the greatest series win for India in their Test history.

No other team from the sub-continent has ever won a Test series in Australia. That is how difficult a task it is to beat Australia in Australia and what a monumental achievement it is for India to have done it twice in succession.
32: India Breached Australia’s Fortress After 32 years
India beat Australia in a thriller in the decider at The Gabba by three wickets. It was Australia’s first loss at their fortress in over 32 years! The last time an Australian Test team was beaten in Brisbane was in November, 1988 when the great West Indian team captained by Sir Viv Richards beat them by 9 wickets. The Gabba represented the pinnacle of the success of the great Australian team of the 1990s and 2000s. From 1990, Australia has played 30 Tests in Brisbane and won as many as 24. They have drawn 6 but not lost a single match at the venue in these 30 years. Gunning down the target of 328 set by Australia in Brisbane was India’s third-highest chase in their Test history and also the third instance when the target was 300 or more. Hundreds from Sunil Gavaskar and Gundappa Viswanath helped India chase down the target of 403 set by the West Indies in Port of Spain in Trinidad in 1976. A brilliant quickfire 83 from Virender Sehwag coupled with a century from Sachin Tendulkar and fifties from Gautam Gambhir and Yuvraj Singh helped India chase down 387 against England in Chennai in 2008.

5: The Fifth-Highest Chase in Australia in Test Cricket
India’s record chase at The Gabba was the fifth-highest successful chase in Australia. South Africa chased down 414 at Perth in 2008 – the highest total overhauled in Australia. Justin Langer and Adam Gilchrist helped the home team chase down 369 against Pakistan at Hobart in 1999. A Packer-hit Australia chased down 339 against India at Perth in 1977 and England registered a three-wicket win scoring 332 for 7 at the MCG in 1928.

India vs Australia: ‘No Excuses, No Answers’ – How Australian Media Reacted to India’s Historic Win at Brisbane
66: Number of Years Since Australia Had Been Beaten In a Home Series After Winning the First Test
India recorded only the fourth such instance in Australia. Only thrice before – and all in the Ashes by England – had an Australian team lost a home series after winning the series opener – this happened in 1882-83, 1911-12 and 1954-55. Australia had beaten India by 8 wickets in the Day and Night series opener at the Adelaide Oval. India came back to win by the same margin at the MCG, saved the Test at the SCG and then chased down a record total to win the series at The Gabba.

928: Number of Deliveries Faced by Cheteshwar Pujara in the Test Series 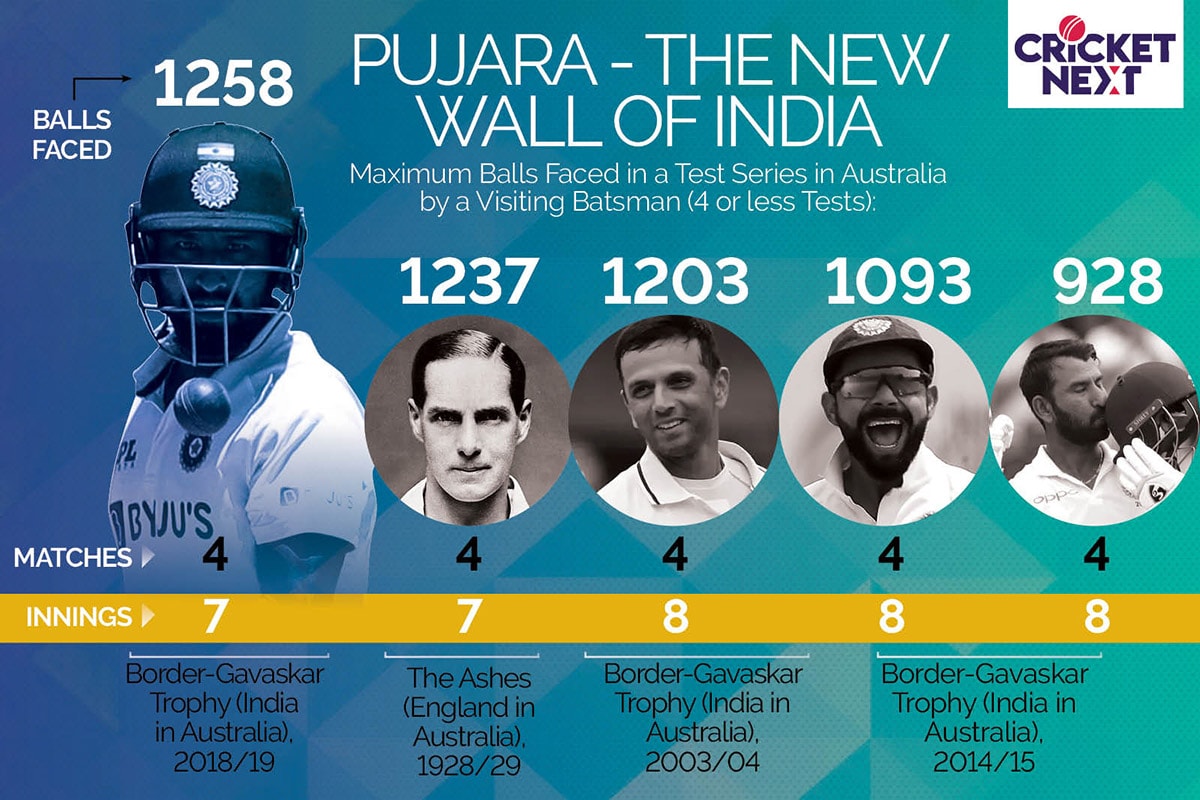 Pujara faced 205 deliveries in the match-saving effort in Sydney and 211 deliveries in Brisbane. The 928 balls faced by him in the series are the fifth-most by a visiting batsman in Australia in a series of four or fewer Tests. The list is dominated by Indians with Pujara with 1258 deliveries in 2018-19 also occupying the top position. Rishabh Pant became the fastest (in terms of number of innings) Indian wicket-keeper batsman to reach the milestone of 1000 Test runs. He achieved the feat during his match-winning innings of 89 at The Gabba. He broke the record of MS Dhoni who had reached the 1000-plus club in 32 innings.

5-73: Siraj’s Maiden Fifer in Test Cricket
Mohammed Siraj returned with 5-73 in 19.5 overs in the second innings at The Gabba. His maiden five-wicket haul in just his sixth bowling innings in Test cricket helped India bowl out Australia for 294 giving themselves an outside chance of pushing for a series win on Day 5.
He became the third Indian pacer after Zaheer Khan (2003) and Madan Lal (1977) to pick a fifer for India in Brisbane. He also joined an exclusive-list of 12 Indian fast bowlers who have taken a fifer in an innings in Australia. Kapil Dev dominates the list having achieved the feat on 5 occasions.

Siraj was the highest wicket-taker for India in the series with 13 wickets – in his debut series.

259: Gill’s Aggregate in the Series

Shubman Gill ended with an aggregate of 259 runs in 3 Tests (6 innings) at an average of 51.8 and strike rate of 60.65 in his debut series. He produced a sublime 45 off just 65 deliveries in his very first Test innings at the iconic MCG. Gill scored his first fifty in the first innings at the SCG where he combined with Rohit Sharma to give India one of their best overseas starts in recent history – the pair put together 70 for the opening wicket. He top-scored for India in the record chase at The Gabba with 91 off 146 deliveries which included 8 fours and 2 sixes providing India the platform and the momentum in the chase.

It was one of the best performances by an Indian opener making his debut in an overseas series.